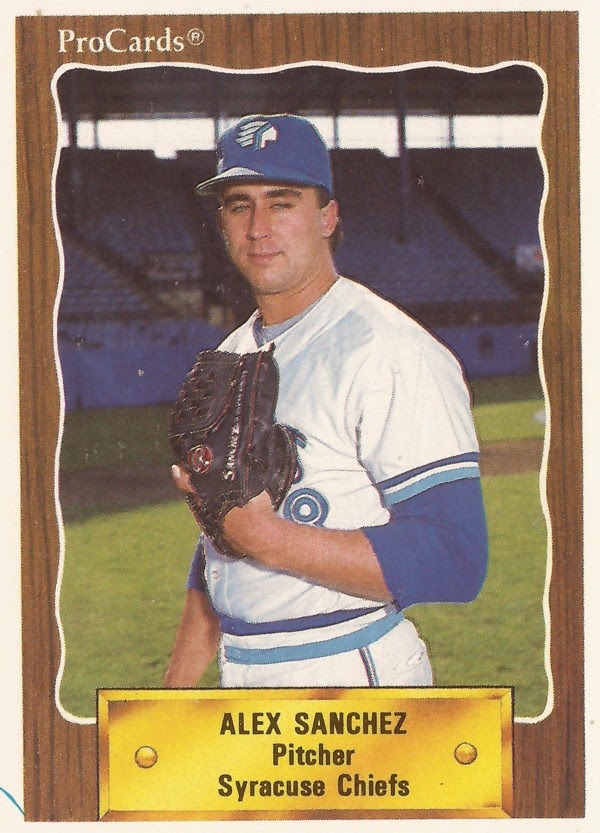 In Alex Sanchez' final year at UCLA, his pitching stats fell off. As the season went on, though they picked up a bit, The Los Angeles Times wrote.

"I started believing in my mechanics and my release point," Sanchez told The Times. "I didn't have the dramatic control problems I had in the beginning of the year."

Sanchez' last season was still good enough for the Blue Jays to select him in the first round of the draft that year in 1987, 17th overall. Sanchez was also good enough to become a Blue Jays top prospect, making the majors in 1989.

But his stay in Toronto and the bigs was a brief one, his major league career consisting of four appearances, and an ERA north of 10.

Sanchez' professional career began at short-season St. Catharines, going 8-3 with a 2.64 ERA. He made AA Knoxville in 1988 and got a look at AAA Syracuse that same year.

He also made the Southern League All-Star team in 1988, amassing a 10-4 record by early July. By late July, he led the league in both wins and strikeouts, and was on his way to Syracuse.

At Syracuse in mid-August, Sanchez struck out nine over seven innings in one outing. Sanchez picked up the win, while The Toledo Blade noted the opposing pitcher's show of anger, stomping around the mound, when the pitcher was pulled.

"I can sympathize with him to a point," Sanchez told The Blade of the opposing pitcher. "You can be out of an inning or game sometimes without pitching bad. A couple bloops, maybe an umpire squeezing the plate."

In is third start, Sanchez walked his first two, gave up two RBI singles and then a home run. He lasted just a third of an inning. On June 10, his final outing, Sanchez worked just two thirds of an inning and gave up four runs.

Back at Syracuse, Sanchez went 13-7 with a 3.13 ERA. Sanchez stayed with the Blue Jays through 1991. In the middle, Sanchez was traded to Indians in September 1990, then traded back that November.

He signed with the Royals for 1992, playing at high-A Baseball City and AA Memphis. He played at Memphis and AAA Omaha for 1993, but didn't make Kansas City.

Sanchez finished out his affiliated career in 1994 and 1995, going through the Padres, Mariners and Athletics systems. His career finally ended on his return in 1998, playing in the independent Western League and Texas-Louisiana League.