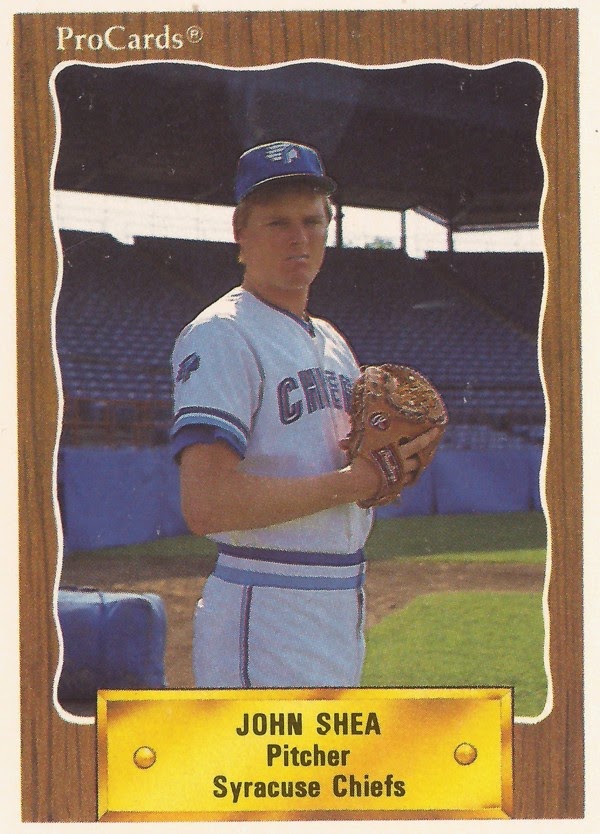 In his eighth season of professional baseball in 1993, John Shea could still pitch. And he pitched well enough in a set-up role to get a vote of confidence from his AA manager at New Britain Jim Pankovits, according to The Hartford Courant.

"I hope the organization takes a look at him," Pankovits told The Courant. "A serious look."

The organization did take a look at Shea, bringing him up to AAA Pawtucket that year. But they looked no further. Shea's latest attempt to make the majors ended like the others, without a call-up.

Shea's career began in 1986, taken by the Blue Jays in the 17th round of the draft. Sent to short-season St. Catharines that year, Shea made single-A Myrtle Beach for 1987. He went 11-5 with a 3.47 ERA for Myrtle Beach that year, pitching four shut-out innings in an August game.

With AA Knoxville in April 1988, Shea recorded his first save, inducing a bases-loaded grounder to end the game. He soon went back down to high-A Dunedin, pitching seven innings and striking out eight in a July win. In 1989, Shea retired 11 straight batters in one June Knoxville victory.

Shea struck out five and walked two in a June 1991 Syracuse victory. In that game, Shea set down 15 straight batters at one point, according to a wire account.

In 1992, his final year with the Blue Jays system, Shea went 8-8 with a 6.18 ERA. In a May game against Toledo, Shea gave up six runs for the loss. That was after he had done well against Toledo in prior outings, The Toledo Blade wrote.