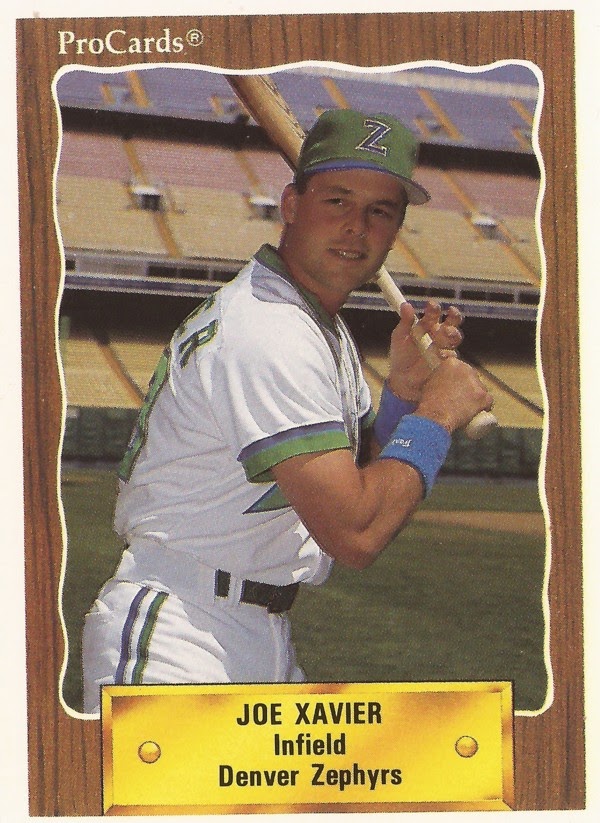 The utility infielder started the year, his fifth as a pro, going 9 for 22.

"He's done an outstanding job in his role," Denver manager Dave Machemer told The Journal that April. "When he's in there, he seems to make us go."

While Xavier could make the Zephyrs go, he ultimately couldn't make himself go. Despite many pulling for him due to the uniqueness of his name, Xavier never got his call up to the majors.

Xavier's career began in 1985, taken by the Athletics in the 13th round out of Fresno State. At Fresno State, Xavier scored 192 runs, a number that was still second in the school record books in 2008. He scored two of those runs in a March 1985 game, one on a home run.

With the Athletics, Xavier started at rookie Pocatello, getting a look at single-A Modesto. Between them, he hit .258. He also hit three home runs, one for Modesto. The Modesto home run came Aug. 27.

"I don't know how far it went because I didn't watch it," Xavier told The Modesto Bee after his home run. "I was surprised I hit a home run. I'm mostly a line-drive type, although once in a while I'll drive the ball."

Xavier returned to Modesto for 1986, hitting .276, with another three home runs. In early May, though, Xavier was hitting .353, the league's best average, according to The Los Angeles Times.

He made AA Huntsville in 1987, hitting .301. In late April, Xavier hit a two-run home run, one of four he hit on the year. He also hit a three-run double in July.

Making AAA Tacoma in 1988, Xavier found himself one step away from the majors. He hit .282 in 87 games, but didn't get the call. It was his final year with the Athletics system, signing with the Brewers for 1989.

By 1989, word of Xavier's advancement had gotten out. It was not so much his play, but his name. Baseball America began a weekly "Joe Xavier Watch." If Xavier got the call to the majors, he would become the first big leaguer with a last name beginning with "X."

But it was the same result with the Brewers as with the Athletics. Xavier hit .262 in 84 games, spending the year at AAA.

He returned to Denver for 1990, starting there, hitting just .224. He then moved to the Braves system, playing at AA Greenville. Sports Illustrated caught up with Xavier there, asking him about his name, and the possibility of still making the majors.

"Just because my name starts with X isn't going to get me there," Xavier told SI. "But it would be great to be the first X in the big leagues."

Xavier hit just .238 at Greenville, in what turned out to be his final year as a pro. The list of major league baseball players still skips over the letter X.