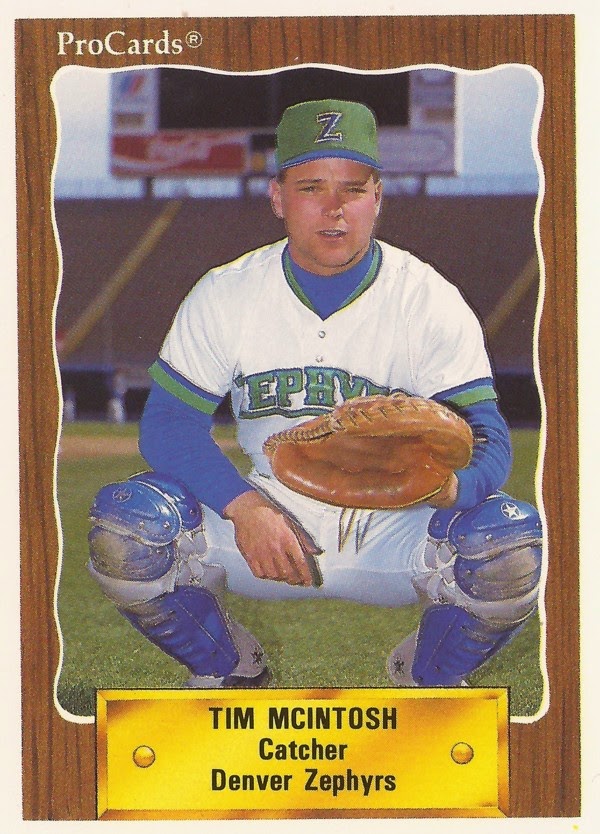 His playing career over in 1999, Tim McIntosh was named to a position with the California League team in Stockton.

And McIntosh was happy to be there.

"I feel very fortunate to be back in the game that I have loved and played for so long," McIntosh told The Stockton Record.

McIntosh had been in that game as a player for 14 seasons, a career that took him to the majors for parts of five seasons, took him to Japan for one and saw him make his first major league hit a home run.

McIntosh's career began in 1986, taken by the Brewers in the third round out of the University of Minnesota.

McIntosh played that first year and the next at single-A Beloit. He was an outfielder his first year, a catcher his second. He moved to single-A Stockton for 1988, then AA El Paso for 1989. At El Paso, McIntosh hit .300 with 17 home runs.

McIntosh made AAA Denver in 1990. In September, he made Milwaukee. McIntosh got into five games for the Brewers, with five at bats. He got only one hit and that was a home run.

McIntosh got into another seven games for the Brewers in 1991, getting four hits in 11 at bats. Then, in 1992, he stayed up the entire year, though he only got into 35 games.

McIntosh played a game with the Brewers in 1993 before being taken off waivers by the Expos, playing 20 more games with them.

McIntosh played 1994 back at AAA Salt Lake, hitting .338. In late July, McIntosh had five hits in one game, then came back the next with four more. He also made the Pacific Coast League All-Star team.

Then came McIntosh's time in Japan. He signed for 1995 with the Nippon Ham Fighters, winning a May game with a ninth-inning home run. He hit .220.

Returning stateside for 1996, McIntosh signed with the Yankees, getting into three final major league games. He had three at bats, without a hit.

McIntosh is last recorded as playing in 1999, 17 games with independent Sacramento. After signing on with Stockton for 2000, McIntosh has gone on to serve as a scout and a coach in the minors. One of he players he was credited with signing for the Yankees was Phil Coke. In 2009, he served as a coach with single-A Tampa.

In 2010, McIntosh returned to the playing field, at the Hall of Fame game, making one memorable, if unconventional, defensive play in the exhibition game - he threw his glove up to stop a ball.

"The last time I did that was in eighth grade, and at that time my coach said it was illegal," McIntosh told the Hall of Fame Web site. "If anything, I thought it would just be funny. So what are the chances? But it’s something they'll remember me by."