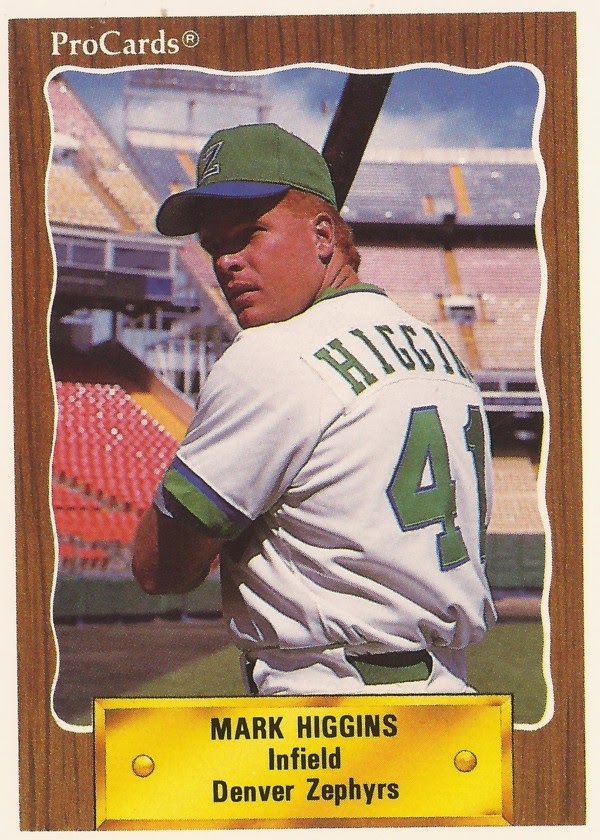 The score tied 3-3, and a runner on first, Mark Higgins came up. Off Mike Flanagan, Higgins smacked a single to center, setting up the tie-breaking run.

It was Higgins' first major league hit, one that came in a crucial situation for his Cleveland Indians, as the Tribe went on to a 5-4 win over Toronto.

It was also a hit that would turn out to be Higgins' only one in the majors. In his fifth major league game, Higgins only got into one more before being sent back down for good.

Higgins made it to Cleveland after being taken by the Indians five years earlier in the first round of the 1984 draft out of the University of New Orleans.

Higgins started at short-season Batavia, hitting .272 with eight home runs. He spent 1985 and 1986 at single-A Waterloo. He hit .254 his first year at Waterloo, then .317 his second. His second year earned him a promotion to AA Williamsport for 1987.

At Williamsport, Higgins hit .312 with 19 home runs. Higgins went 4 for 5 in one April game, knocking in four, according to The Reading Eagle.

In May, Higgins was named the Eastern League's Topps Chewing Gum Player of the Month. Higgins hit .346 with 10 home runs and 39 RBI, according to The Schenectady Gazette.

Then, in one June game, Higgins had two hits in a Williamsport victory.

"That definitely was a good win," Williamsport manager Orlando Gomez told The Reading Eagle of the June win. Higgins tied a game the next month on a two-run home run.

Higgins divided 1988 between Williamsport and AAA Colorado Springs, his combined batting average dropping off to just .224. Higgins, however, came back strong for 1989, improving his average to .329 for Colorado Springs and earning that September call-up to Cleveland.

Despite getting his call-up, Higgins' time with the Indians was done. He spent 1990 with the Brewers at AAA Denver. He hit .283 with 16 home runs for the Zephyrs, ending his playing days.