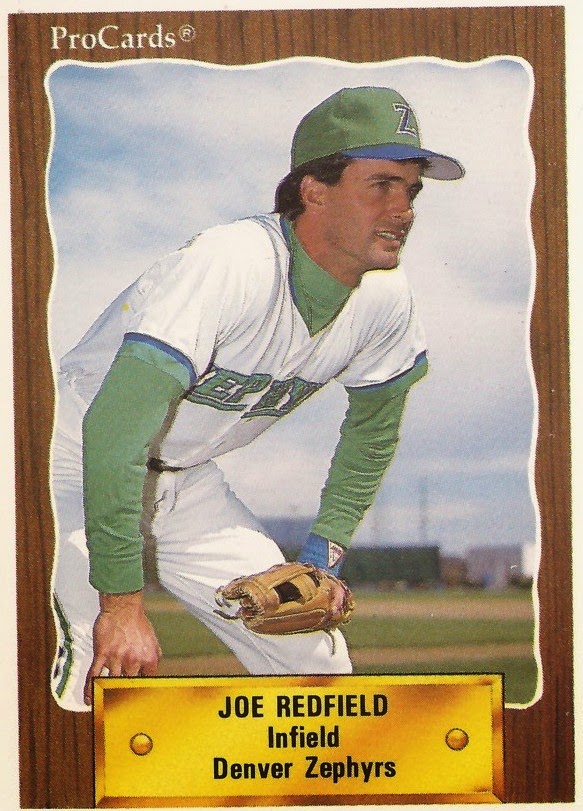 When Joe Redfield was called up to the majors for the first time in 1988, in his seventh year as a professional, Redfield told The Pittsburgh Post-Gazette it made his years in the minors all worth it.

"Some guys made it up here in a couple of years and never went through the hard times in the minor leagues," Redfield told The Post-Gazette in June 1991, after just his second career call-up. "For me, it's been a year-to-year thing. I couldn't really afford to have a bad year in the last few years."

Redfield's first call-up in 1988 lasted just over a week, the new major leaguer getting into a single game with two at bats and no hits. In 1991, he was called up to the Pirates, getting a longer stay, filling in after an injury. Still, he got into just 11 games, getting two hits.

Those two call-ups proved to be the extent of Redfield's major league career. In 11 professional seasons, Redfield got into just 12 big league games, getting just those two hits.

It was also a career where Redfield made an impression on at least one of his managers. Years later, when remembering his AAA team, it was Redfield the manager volunteered as a player who played hard, giving everything he had.

Redfield's career began in 1982, taken by the Mets in the ninth round out of the University of California, Santa Barbara. He played that first year at short-season Little Falls. He hit .286 with eight home runs.

Redfield made AA Jackson the next year for 36 games, returning there in 1985. He also got his first, brief, look at AAA in 1985, at Tidewater.

Traded to the Orioles in April 1986, Redfield played that year at AA Charlotte. He arrived in the Angels system in 1987, playing at AA Midland. He hit .321, with 30 home runs at Midland

It was in 1988 that Redfield got his call-up to the Angels after a series of injuries. He got into his only game June 4, getting to the plate twice.

He played the rest of the year at AAA Edmonton, hitting .290 with three home runs on the season.

Redfield signed for 1989 with the Phillies, playing the year at AAA Scranton. He hit .241, with nine home runs there. In one June game, he scored three times.

The infielder signed with the Phillies that year, Redfield told The Philadelphia Inquirer in July, because the Phillies guaranteed him a spot in big-league camp. He also had thoughts of being considered for the Phillies third base job, once Hall of Famer Mike Schmidt was done.

"That made it look even a little better," Redfield told The Inquirer. "There wasn't a 25-year-old third baseman in the wings."

For 1990, Redfield signed as a free agent with the Brewers. He played that year at AAA Denver, hitting .274 with 17 home runs. With the Brewers, though, they had a young third baseman already in Gary Sheffield.

For 1991, Redfield signed with the Pirates. He started the season at AAA Buffalo. By mid-June, after a Jeff King injury, Redfield was in Pittsburgh. He stayed for a month.

And Redfield was just happy to be there.

"I thought my chances were pretty slim I was going to get called up," Redfield told The Los Angeles Times in late June. "It's fantastic to be in the major leagues, but the trick is staying there. I will celebrate when it's all over."

One more season and his career was over. Redfield played 1992 back at Buffalo, hitting .224, and his playing career was done.

Years later, in July 2011, one of Redfield's old managers, Dave Machemer, recalled to The Greatest 21 Days a player who should have been given a better shot at the majors.

Redfield was among the players that Machemer thought of when asked about his 1990 Denver Zephyrs team. Machemer spoke to The Greatest 21 Days in Richmond, Va., where Machemer managed for 2011.

"He played hard," Machemer said. "He gave you everything he had. He could play the game."