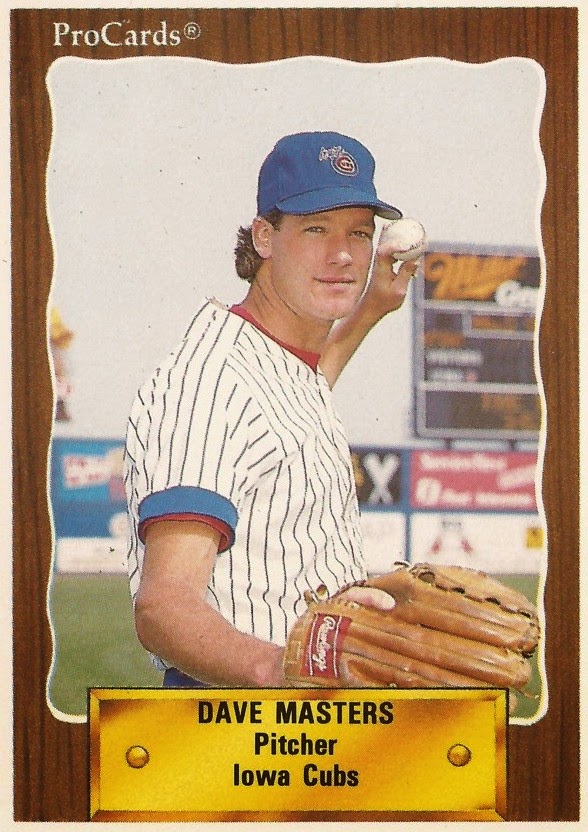 In his eighth pro season, Dave Masters looked to make his first jump to the majors in 1992. And he pitched well enough in one spring game to get noticed, according to The South Florida Sun-Sentinel.

In one spring outing, Masters pitched to 13 Padres batters, getting 12 of them out.

"He was a long shot before the game," Giants manager Roger Craig told reporters after the game, according to The Sun-Sentinel, "but not now."

Masters, though, didn't end up making it that year, or any year. A former first-round pick, Masters played that year back at AAA and just one more year after that.

Master's career began in 1985, taken by the Cubs as the 24th overall selection in that year's draft, out of the University of California, Berkeley.

Masters played his first two seasons at single-A Winston-Salem, going just 1-11 his first year there and 8-9 his second.

Starting out 1989, though, Masters got injured. He then had to face the possibility of being without the game, and never making the majors, according to The New York Times.

"I don't know anyone in the minors who isn't really scraping financially just to exist," Masters told The Times, as he went back to school while still keeping his playing career alive. "You always keep hoping you'll get called up to the majors. But you can go from prospect to suspect almost overnight."

On the field, Masters started just four games at Iowa in 1989. He returned for 1990, hoping his injury was behind him. The Cubs, too, hoped that, according to The Chicago Tribune.

"Dave knows that this is a critical year as far as the future of Dave Masters is concerned," Cubs minor league director Bill Harford told The Tribune. "He's a bright kid, and I think he's maturing a little bit. I hope that the problems he's had in the past, both physical and mental, are behind him and that we can go forward."

Masters started the year back at Iowa. By mid-year, though, he was with the Expos, at AA Jacksonville.

By late-1991, Masters was with the Giants, at AAA Phoenix, having started that year at AAA Indianapolis. He then played those two more years in the Giants organization, missing that spring 1992 shot at the majors, ending his career without making the bigs.