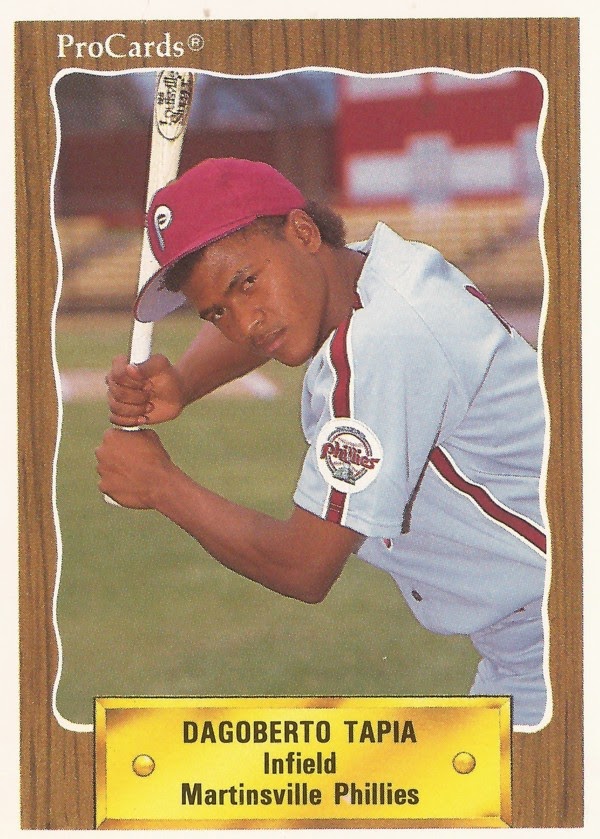 There are more than 30 players listed in Baseball-Reference with the last name Tapia.

There's Alexis Tapia, who's played two seasons in the Twins organization and was still active in 2014.

There is Santiago Tapia, who played in the minors from 1978 to 1980 in the Blue Jays and Pirates organizations.

There's also a Domingo Tapia. Domingo has been active since 2010, continuing in 2014.

But, according to Baseball-Reference, there has never been a Dagoberto Tapia play baseball professionally.

There's also no one with a similar name on the 1990 Martinsville Phillies roster.

About the only information available is the information on the back of his card. He signed with the Phillies as a free agent in January 1990 out of his native Dominican Republic. He lived in Bani, D.R.

The Philadelphia Inquirer did include Tapia in an article on Dominican signees by the Phillies, spelling his name Dagoverto Tapia.

He was born Oct. 9, 1972. That made him just 17 years old when he made his way to Martinsville and onto his ProCards card. That makes him among the youngest in the set.

The infielder stood 5 feet, 11 inches, weighed 155 pounds, batted right-handed and threw right-handed, only he apparently never batted or threw in a game.