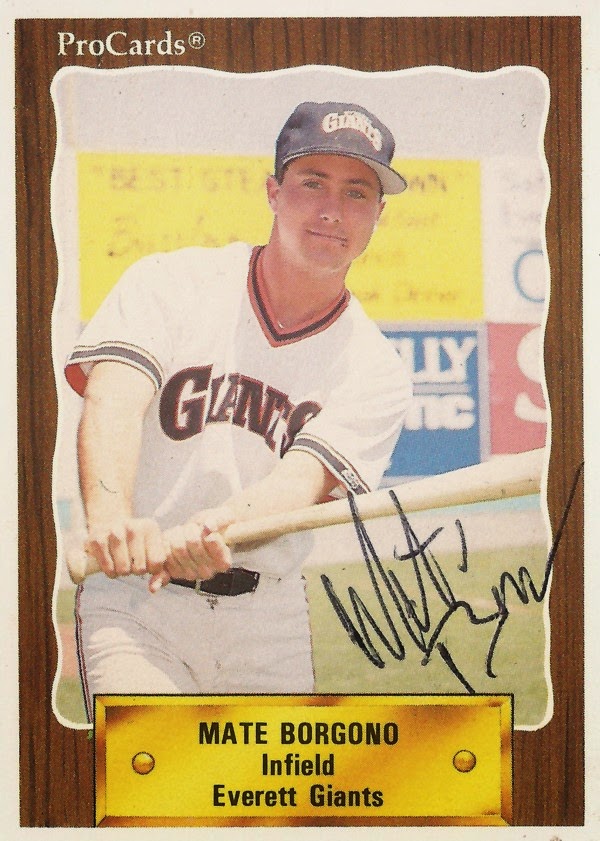 Matè Borgogno had a pretty good idea he'd have a chance to turn pro after his junior year in June 1990 and he did.

He had a good idea because multiple scouts had expressed interest in him. The Royals seemed to express the most.

When the time came, though, it wasn't the Royals who took him. It was the Giants.

"I was excited that I got drafted," Borgogno told The Greatest 21 Days recently. "But I didn't know a lot about the Giants."

That lack of knowledge came back to hurt him. After signing, and leaving behind his senior year at Cal State Fullerton, Borgogno recalled soon realizing that there didn't seem to be a place for him in the organization.

He wasn't a top pick, but he was an 18th round pick. The result was he played sporadically.
"I was just confused," Borgogno recalled, "how you could get drafted and then not even play every day. If I'd have known I wasn't going to play every day I wouldn't have signed."

Borgogno never did get himself into an every day situation. His career was also limited to just two seasons and 77 total games.

He has since gone on to a long career as a teacher and he spent many years as a high school baseball coach.

He's also gone on to see his four sons play the game. His oldest, 16-year-old Brett Borgogno, is now high school prospect himself.

Borgogno spoke to The Greatest 21 Days by phone recently from his California home. He covered his connection to the game from learning it as a youth to high school, college and the pros.

"I knew I was going to sign," Borgogno said. "I wanted to go out and play pro ball."

He started that pro career in Everett, Wash., with the Giants' short-season club. Borgogno recalled that summer as a great experience. There were other California kids on the team, as well, so that helped.

But the playing time issues started almost immediately. The Giants seemed to have middle infield prospects at every level, Borgogno said. First-year Giants players had to swing a heavier bat, along with the switch from aluminum to wood.

He was also small, listed at 5 feet, 9 inches tall, something that he recalled didn't help him in positions where bigger players were taking hold.

"Having the opportunity to play pro ball was great," Borgogno said, "but it was just a little disappointing not playing every day."
Still, he got into 31 games at Everett and later 10 at single-A Clinton. He hit .217 at Everett, an average that didn't lend itself to getting moved up, he said.

"I always did fine defensively," he said, but offensively I struggled."

That off-season, Borgogno recalled working hard to make sure he was ready for spring training. He even got to work out with the AA team while knowing he'd probably start back at Clinton.

He played well and he did go to Clinton. He also wasn't a starter.

"I had a great spring training," Borgogno said, "but those guys were the prospects and I wasn't."

By the end of July, he had just 36 games under his belt. He was also hitting just .226. A ground ball then made sure he'd get no more playing time that year.

A bad throw to first got the runner Borgogno tangled up with the first baseman. He hit the ground and broke his collarbone. His team went on to win the Midwest League championship, but he was out for the year.

He worked through the winter again and returned for spring training 1992. After a week, he realized he was getting to play even less. Soon, he was cut.

He recalled the end coming on the training table, holding a heat pack to his knee. The coach came, they needed to talk.

"So I grabbed my heat pack and I started carrying that with me," Borgogno recalled, "and he goes 'you won't need the heat pack.'"

Once in the office, he got the news: He was being released.

He cleaned out his locker, collected his 1991 Midwest League championship ring and he left. His parting gift was a small check that represented airfare home.

"I just went home, finished my degree, got into coaching high school and teaching," Borgogno said.

Borgogno had worked to position himself in school for a career in the pros, even switching schools because he believed it would increase the chances that scouts would see him, and it was over after just two seasons.
"I don't think it was hard at all, for me, at least," Borgogno said of leaving his playing days behind. "I think mentally, I was already probably removed from the game."

The playing time issues, he said, helped get him in that mind set.

So, he went back to Fullerton and graduated with a degree in physical education. For nearly 20 years, he has been a teacher at La Habra High School near Los Angeles. He started there in 1996.

He spent about 12 of those years as a coach, heading up good teams that won many games and championships. But he also wanted to coach his sons and spend more time with them.

His sons are now age 16, 13, 11 and 7. His oldest Brett has played well enough in high school to already be recruited by several colleges as a sophomore. One of the colleges Brett is being recruited by: The college his father started at, Nebraska.

"It's very enjoyable watching him play," Borgogno said. "I enjoy watching all my boys play. They're all good."

Be sure and read Part 1: Matè Borgogno, The Rest