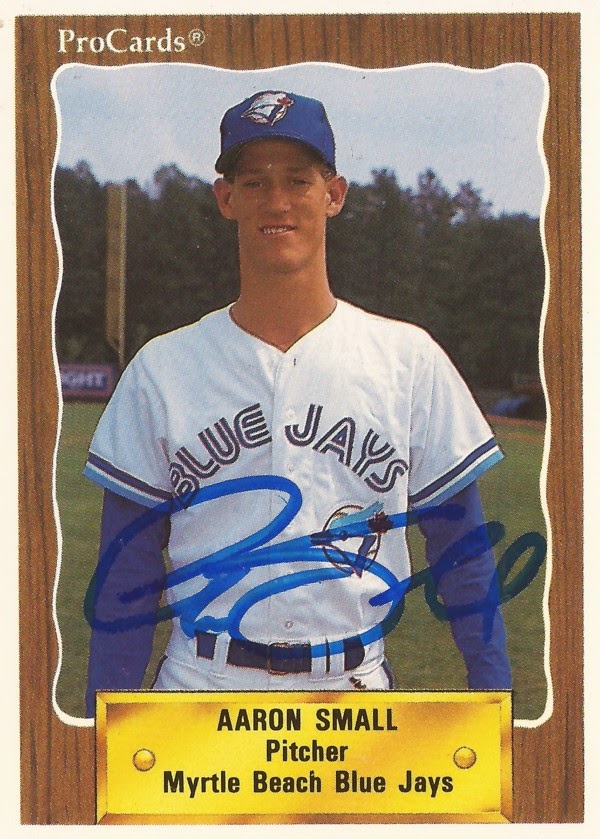 Aaron Small's heart started racing: Was Bill Buckner trying to give him a hint?

"He told me, 'you've been really throwing well,'" Small recalled recently to The Greatest 21 Days of that June 1994 encounter, "and he said 'good things are about to happen for you.'"

Small was in his sixth professional season, his first at AAA. Buckner sure seemed to imply that Small's status might change, and change soon.

Small only had to wait until that night's game to find out for sure. His manager Bob Dedier took the unusual step of summoning Small in from the bullpen to the dugout.

"How long have you wanted to be a major league player?" Didier asked.

Since he was 4 or 5 years old, Small responded.

"He said, 'Well, congratulations, as of tomorrow, you are. You're going to Toronto,'" Small recalled.

"That was exciting," Small recalled, "very exciting."
For Small, it was the start of a major league career that would span nine seasons and 172 total appearances. He got 71 of those appearances in one season, 1997 with the Athletics.

The appearances he is perhaps best remembered for are the 15 he saw in 2005 when he went 10-0 for the New York Yankees.

Small traced his career from its beginnings as a youth in suburban Los Angeles to the pros and eventually to the majors.

In the middle of that career was a five-year stretch where he only recorded a single major league out. On the other side of that stretch, though, was that run with the Yankees and his own place in Yankee lore.

Once Didier broke the news, Small headed back to the clubhouse. He had calls to make.

He recalled getting through to his parents immediately. In a time when cell phones were still the exception, though, he couldn't get through to his girlfriend Macy, the woman who is now his wife.

"I'm like, 'No way, I've got this news to tell her and she's not even home to take my call,'" Small recalled with a laugh.
He finally got through - two hours after that day's game was over. In the meantime, Small stayed with his Syracuse team.

By then, Small recalled his father was already deep into setting up the family's trip from Southern California to Toronto. "His wheels started spinning," Small recalled.

The excited dad who often played catch with his son on the family's front lawn was now going with the family to see his son pitch in the major leagues.

They made it. Small's father, mother, brother and sister all got there. Work prevented Macy from making it, as well. The only thing that could have made it more special, Small said, was if Macy could have been there.

Small didn't get into the first game. He made it into the second one, though.

That was a game started by the Blue Jays' Dave Stewart - the former Los Angeles Dodger Dave Stewart. The same Dave Stewart whose nickname "Smoke" the Little Leaguer Aaron Small had earned many years before.

"I got to come in behind him and my mom, dad, brother and sister got to be there at the game in Toronto," Small marveled. "And it was against the Yankees, as ironic as that is."
"It was awesome," Small said. "I always envisioned it that way."

On the mound, Small got through a rocky initial inning. He gave up two hits, but didn't give up a run. He came back for the ninth and he quickly gave up a run - a home run to Yankee Paul O'Neill.

Small recalled meeting O'Neill in 2005 after arriving with the Yankees. O'Neill, Small recalled, assured Small that he didn't remember many of his home runs. But he clearly remembered the one he hit off Small.

Small got out of that ninth giving up one more run. It ended up being his only major league outing of the shortened season.

Small returned to Syracuse. He later even returned to AA Knoxville to finish out the season and work on starting.

Small had made the majors. His next task was getting back and trying to stay.

"Coming up through the minor leagues, I always heard it was tough to make it to the majors and tougher to stay," Small said. "I definitely agree with that after 1994.

"You've got to be a little bit sharper," Small added, "a little more consistent to stay at that level."
It took him two more seasons, but Small eventually did that for a couple years. He got into seven games in 1995 with the Marlins, then 12 for the Athletics in 1996.

In 1997, Small played virtually the entire year in the majors, getting those 71 appearances. He went 9-5, with a 4.28 ERA. It was Small's first breakout season.

Small remembered two April outings in particular. One was a bad outing that still resulted in a win. Small pitched four innings - the 8th through 11th. He gave up three runs in the top of the 13th. His team then picked him up in the bottom of the frame, scoring four to win.

The other outing he recalled was his second of the year - at Yankee Stadium. It was actually ring day for the Yankees, the club getting its 1996 championship rings in a ceremony.

Small and the Athletics succeeded in spoiling the party. Small's role was three innings of relief, the 10th through the 12th.

This time he was nearly perfect. He gave up two walks, but he didn't give up a hit. He even got O'Neill to fly out to left. With the Athletics scoring twice in the top of the 12th, Small had the win - his first at Yankee Stadium.

"That was a really neat experience," Small said. "I didn't know that I'd be back there eight years later."

He'd be back pitching for the home team. He also kept winning. (Part 3)