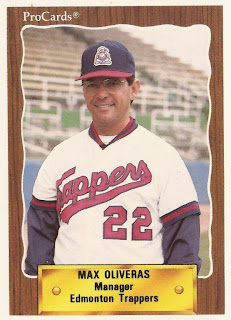 When the Mets' VP of player development Tony Bernazard was accused of taking off his shirt in summer 2009 and challenging a AA Binghamton Met to a fight, Binghamton manager Max "Mako" Oliveras was quick to play down the situation.

"I think it's been blown out of proportion," Oliveras told The Binghamton Press and Sun Bulletin, according to MLB.com. "Tony was trying to pump the players up. He took his shirt off, but he had a T-shirt on underneath. To me, he never threatened anybody or asked anybody to fight. Before he started the meeting, he took his shirt off. That's it. I'm telling you, it's been blown out of proportion."

By the end of July, Bernazard was gone. Oliveras and others, were gone as well.

Oliveras has managed or coached somewhere in baseball almost every year since 1984, when he managed Truchas de Toluca of the Mexican League. He took to the managers office after eight seasons in the minor leagues as a player, signing with the Red Sox in 1968 out of Puerto Rico. He joined the Pirates organization in 1973, but never making the majors as a player.

Oliveras spent three seasons in Edmonton, helming the Trappers, his first season in 1990. He was also a member of an exclusive club: the only Latin manager at AAA. Sports Illustrated noted that in 1991, writing about the lack of minorities in top baseball jobs. Latin managers in the lower minors, the writer said, were often "glorified interpreters."

Oliveras, the magazine also noted, hadn't been considered for a major league position.

It was with the Cubs in 1996 that Oliveras told The Chicago Tribune of the difficulties Latin players have acclimating to baseball in America, as well as the kind of major league coach he wanted to be. He didn't want to be typecast as the baby-sitter for Latin players.

"I don't mind helping them," Oliveras told The Tribune, "but I want to be a coach in my own right. I'm not here to babysit anybody. But I'm here to help them with advice."

After leaving the Cubs, Oliveras returned to managing in the minors. The 2009 season in Binghamton was Oliveras' third with the club and final. It's unclear if he'll land anywhere for 2010. But he returned this past winter to manage the Puerto Rico squad in the Caribbean Series, coming in second, but taking the tournament's top manager award.