Interview Part 4: Jim Blueberg, After It 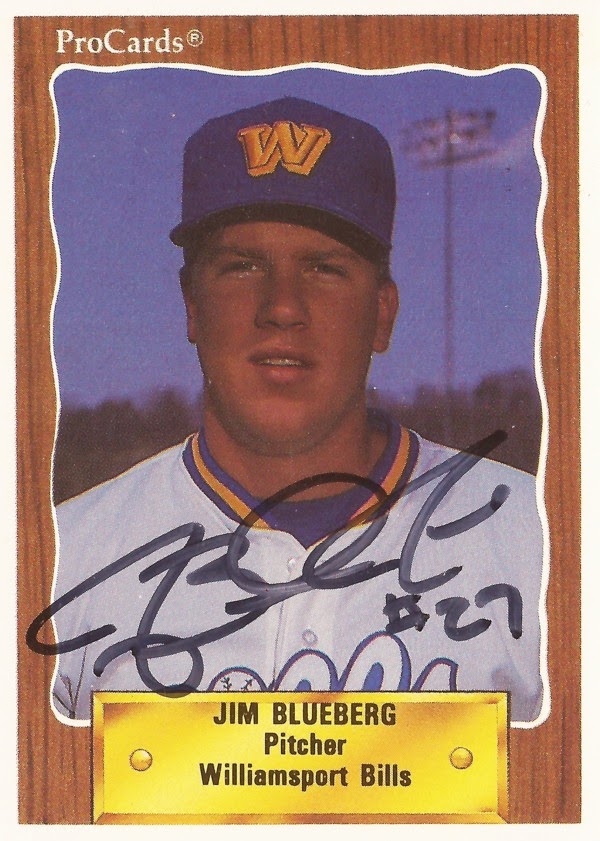 Jim Blueberg was well into his second career in the steel industry when the recession of 2008 came and hit the Reno area hard.

It was a trying stretch for Blueberg as he worked to keep his business Blue Mountain Steel going. In the end, Blueberg simply moved on. He also moved back to the industry where he got his start: baseball.

Blueberg, who played six seasons in the minors before a shoulder injury ended his career, returned to the game in 2011 as a scout for the New York Mets.

"That was as pretty stressful time for me, trying to keep that thing going," Blueberg said of his steel business. "And I really think the Lord closed that door and opened this one and I went after it."

Blueberg used some of his old contacts from his playing days. He met scouting directors and got interviews. Soon, he had a new job: Scout for the Mets covering California, Nevada and Hawaii.

"It was learning and learning quick," Blueberg recalled of the transition to his newest career. "I think there are certain things that people can do that come natural to them and this is one of those things for me."
It came natural, Blueberg said, because he's continued involvement in baseball through his three children, coaching and following them. His oldest, Colby Blueberg, is now a pitcher in the Padres system, taken in the 24th round of the June 2014 draft.

Blueberg spoke to The Greatest 21 Days recently by phone from his Nevada home and before heading out on a scouting trip.

The father of three tracked his career from a failed high school tryout to his successful college stint and on to the pros. It was seemingly only that injury that stopped him from making the majors.

He's now working to find the next generation of players, scouting California, Nevada and Hawaii for the big league club from Queens.


Blueberg's steel career began after his playing career ended due to a torn labrum. He'd lost almost an his entire second season to an arm injury. This injury, though, would have required a lengthy recovery and, even if he succeeded, he would have been that much older.


So, Blueberg went home and started his second career.


"I've got no regrets," Blueberg said of how his playing career went. "I loved the game, I loved the opportunity. I'm extremely thankful to this day. I'm grateful for all of it. It was a gift."
Blueberg recalled he had already been looking toward the day when the game might not be there.

His father, Jim Sr., had started a steel business in the Reno area when Blueberg was 12. He then sold it. After that guy went bankrupt came Blue Mountain Steel. Blueberg's mother suggested the name, "berg" is German for mountain.

Blueberg had spent a year as a iron worker after high school, before he went to Yuba College and made the school's baseball team. So that, with his family experience, gave Blueberg a base for Blue Mountain.

He took over the business after he retired and it exploded, he recalled. At one point, he recalled, he had 160 employees working for him.

But nothing was easy, he recalled, from the red tape to the dangers of the job and the jobs themselves. It was also a cyclical business. There were good years and bad ones. The good times never lasted more than a year or two, he recalled.

After the 2008 recession hit, he was down to 20-25 employees. After fighting to keep the business open and the jobs dwindling or non-existent, he shut down the business in 2011 and retired.

"What you do is you just keep fighting, kind of like I learned when I was a kid," Blueberg said. "But there came a point where I'm like 'what am I fighting for?"
That's when Blueberg started thinking about trying to become a scout. He'd kept in contact with some of his old friends from his playing days, including Rich DeLucia, who was a scout with the Dodgers.

Blueberg recalled going down to Long Beach and meeting some scouting directors through guys he'd played with. He then got some interviews with the Indians, Dodgers and Cubs. He made some final lists with them. He then interviewed with the Mets.

Blueberg's resume included his playing days, along with some coaching in high school, summer ball and some college. Soon, the Mets called and he was a scout.

In the three years since, Blueberg has signed Chris Flexon, a 14th-rounder in 2012 who became the Appalachian League Player of the Year in 2013, but missed most of 2014.

He almost had a second rounder, he recalled, but the player had a higher pre-draft offer from another team. The Mets didn't feel the player was worth matching that offer, so they passed.

It took a little time, Blueberg recalled, to learn how to split hairs on players in a meaningful way. He also needed to learn how to describe a player so that his scouting director could see on paper or the computer screen what Blueberg saw.
Blueberg said he's found that scouting isn't just about getting players teams want. There's more to it than that.

"I think scouting is more about making sure you don't take the players you don't want," Blueberg said. "That's where the true value of scouting is."

He noted Mets scouts have been doing a good job in both areas as the club now has one of the best systems in the game.

"I spend a lot of time doing just that and that never gets seen on draft day," Blueberg said.

And, if the Mets scouting team does it right, that gets the club that much closer to the ultimate goal, Blueberg said: If the Mets get a ring, Blueberg and the other scouts get one, too.

After going out and watching all the players, getting the cross-checkers in to follow up on his work, Blueberg and the other scouts head to Citi Field in Queens for the draft.

The club's top 60 or so players they're interested in are on the board. They're usually all gone by the end of the third round, then it's the area scouts' expertise comes into play, Blueberg said.
In 2014, Blueberg got to see one of his own prospects drafted. It was his son, Colby Blueberg. The dad was in the Mets draft room when word came down that the University of Nevada-Reno product was taken by the Padres in the 24th round.

Blueberg knew how talented his son was, but he was glad he got drafted by a team other than the Mets so he could have his own career and not be overshadowed by his dad.

When word of the selection came down, Blueberg recalled, the entire draft room came over and shook Blueberg's hand.

"I was extremely excited for him," Blueberg said. "He's getting an opportunity to do what I always hoped would have happened for him."

Colby Blueberg then went out and showed that he probably should have been taken sooner. In 35.2 innings between short-season Eugene and single-A Fort Wayne in 2014, the young reliever gave up only two earned runs.


Colby is one of Jim and Heather Blueberg's three children.

Their second son, Chase, just started college at a school near Yuba.  He also plays baseball. "He's more like my story," the dad said of Chase, "a little bit of a late-bloomer, so that story yet to be told but he's off to a great start."

Daughter Chandler is in high school. She plays volleyball and sings the National Anthem at the high school games. Chandler, the dad sad, "has the voice of an angel."

Blueberg also has his wife of 23 years, Heather, whom he met during his playing days in San Bernardino.

"I got a job with the Mets as a scout and now I'm doing what I love," Blueberg said, "and I can't believe they're paying me to do it. That's the truth."