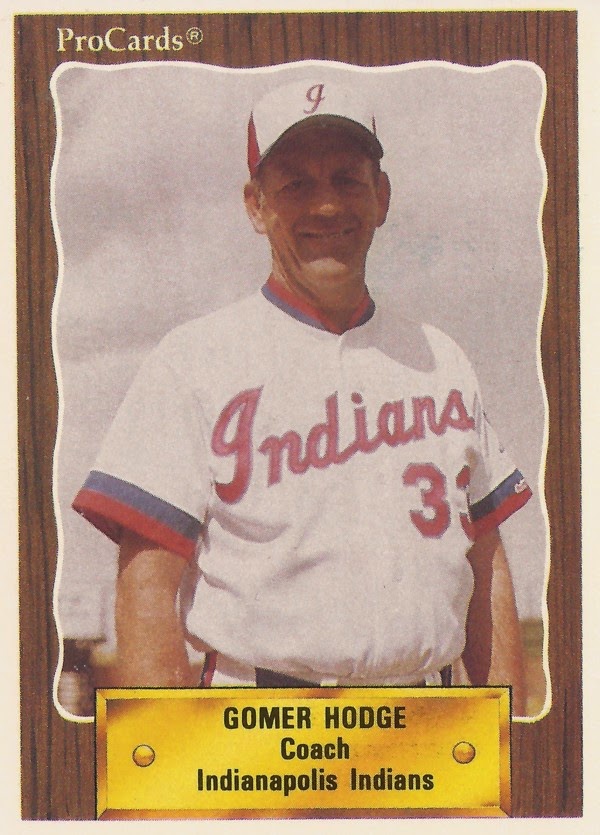 Gomer Hodge made the Indians in April 1971 and he didn't waste time in endearing himself to the city's fans, UPI wrote.

Hodge deliver on the field, getting hits in his first four at bats, including a game-winner. He also delivered with his down-home southern personality that earned him his own fan club, "Gomer's Gang."

"Greatest thing in sports to ever hit Cleveland," teammate Ken Harrelson told UPI that May. "He won't be the greatest player, but just the best loved."

Hodge never was the greatest player. He had just that one memorable season in the majors. But, with that personality, he was well loved both in his playing career.

In 2007, it was his personality and his knowledge of the game gained over his decades of experience that were remembered after his passing at the age of 63.

Hodge's life in baseball began in 1963, signed as a free agent by the Indians out of his native North Carolina. In North Carolina, Hodge was known by his given name, Harold.

He played his first three seasons with the Indians at single-A, starting at Dubuque. He made AA Pawtucket in 1966, then AAA Portland in 1969.

Then, in 1971, Hodge made Cleveland. It was his ninth season as a pro. He started with those four hits. After his third, he joked that he was hitting 3.000. He met his fan club for the first time in May in the Cleveland Stadium right field bleachers, according to The Associated Press.

"They jumped on me like a covey of birds," Hodge told The AP. "I love kids, and it makes me feel good to know I can make them happy."

Hodge ended up getting into 80 games for the Indians that year. He hit .205 with one home run.

Hodge served as a manager in the Midwest League for at least seven years, starting in 1981 with Waterloo. He also managed at Beloit.

Hodge moved to the Expos system in 1989, serving as hitting coach at AAA Indianapolis from 1990 to 1992. In 1992, Hodge watched over a young hitter named Rob Natal, seeing Natal move up to Montreal.

"Gosh, I'm just a hittin' guy," Hodge told The Los Angeles Times. "But I'd say Natal's going to get a chance to go up there and catch quite a bit sometime this season."

Hodge moved to the Red Sox system as a coach in 1996. He stayed there through 2001, his final season as a coach. He didn't make the majors as a coach.

By early 2007, Hodge's wife was reaching out to his fans, asking that those who remembered Hodge to send cards. Hodge then was battling Amyotrophic Lateral Schlerosis, better known as Lou Gehrig's disease. By that May, he was gone.