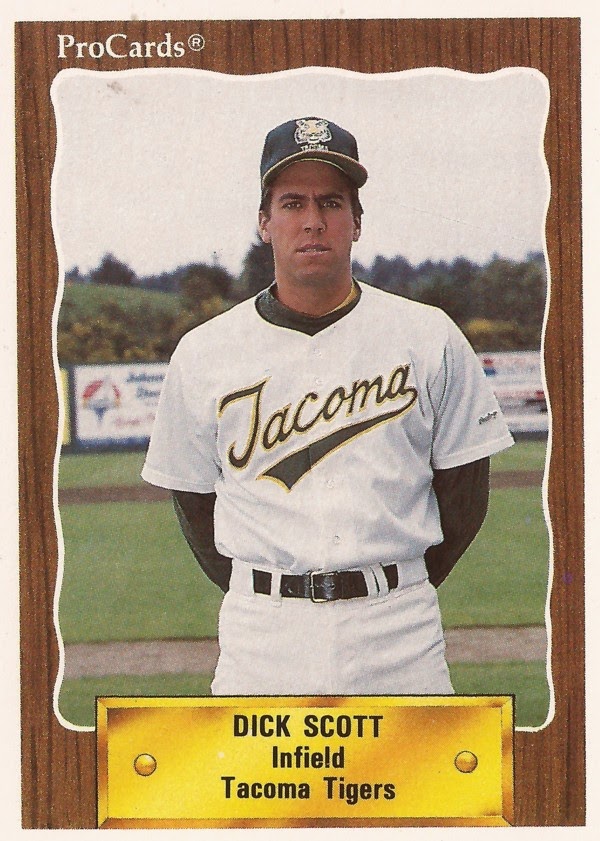 Working as the Blue Jays director of player development in 2009, Dick Scott believed the toughest parts of his job were the budgets, and the business side, he told his hometown Bangor Daily News.

"The most enjoyable part of the job is working with the players," Scott told The Daily News, "being around and involved either in Toronto with the major leaguers and talking to [Blue Jays manager] Cito Gaston or brand-new guys in the farm leagues and seeing them develop."

Scott made the majors in 1989 with Oakland, in his ninth season as a pro, for all of three games. He got two at bats, one RBI and no hits.

Scott's career in baseball began in 1981, taken by the Yankees in the 17th round of the draft, out of Ellsworth High School.

Scott started in the rookie Gulf Coast League, hitting .235 in 48 games. He moved to single-A Fort Lauderdale in 1982. he even got five games at AAA Columbus.

Scott, though, didn't make it above single-A for any extended period of time until 1985, at AA Albany-Colonie. There, Scott hit .214 with four home runs. Scott also helped Albany to the playoffs, but the playoff run was brief.

"That's what happens in the playoffs," Scott told The Schenectady Gazette. "A best-of-five or best-of-three playoff is tough. It's a situation where anything can happen and a hot team can win it all."

Scott started at AAA Tacoma. Then, in May, Scott got his call up. He got into his first game May 19. He grounded out, but he also knocked in a run. In all, over his three games, Scott went 0 for 2. His final game came May 29.

Scott played out that year at Tacoma. He also played 21 games the next year back at AAA, also serving as a coach.

Scott has since gone on to be a manager in the minors, managing from rookie ball in Arizona to AA at Huntsville.

By 2001, Scott was the Blue Jays' director of player development. By 2011, and into 2012, Scott was Mets minor league field director. With the Mets in 2011, Scott was tasked with improving a minor league system ranked 20th overall, according to The Portland Press-Herald.

"We've got some work to do," Scott told The Press-Herald. But "I'm happy here. It's going to be good."