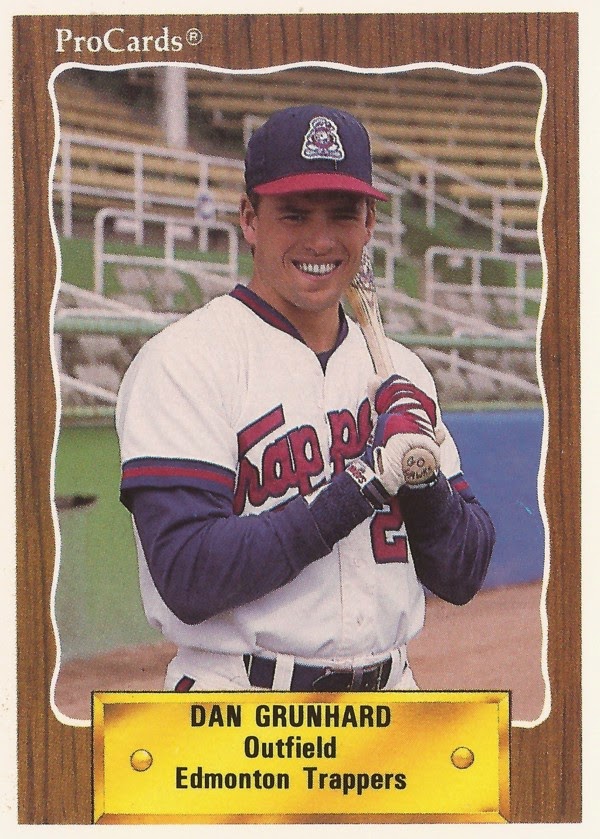 "He likes to play the game," Bavasi told The Tribune. "He knows the game. I'm not worried about a schedule, but yes, he can play in the big leagues. That's not saying he will. He has his work cut out for him, just like a lot of other guys."

While he could have played in the majors, Grunhard never did. He played seven seasons in the minors, never making it to the bigs.

Grunhard's career began in 1986, taken by the Angels in the 26th round, out of Northwestern. At Northwestern, Grunhard played as a walk-on, ending with the highest career batting average and second-highest single-season average. By 2005, he was still seventh on the career home run list.

It was his work at Northwestern and afterward that caught the eye of Angels manager Doug Rader that spring in 1990.

"The way (Grunhard) plays defensively is very admirable," Rader told The Los Angeles Times, "but the thing I like best is he never received a scholarship for anything. Everything he's gotten in this organization he's earned. Some players have silver spoons in their mouths. Dan Grunhard has been eating with his fingers. It's great to see."

By early April, The Times was counting Grunhard among those players who might benefit from an expanded roster resulting from the lockout. Grunhard, though, wasn't interested in the talk. He was more interested in doing.

"I actually haven't sat down and tried to figure out the numbers," Grunhard told The Times of the roster expansion. "It's not something that concerns me directly. I'm more concerned with what I do on the field."

Grunhard, though, ended up being sent back down to spend his first time at AAA Edmonton. He hit .301 in 126 games, without getting called up to Anaheim.

He also returned to Edmonton for 1991, hitting .267 that year. In June, Grunhard told The Tribune he still saw himself having the success he sought.

"I'm always working to get better," Grunhard told The Tribune. "I didn't come here with the kind of blue-chip credentials a lot of other guys have. But I believe if you want something bad enough you'll do what you have to to get it."

Grunhard did what he could, but he never got there. He returned for one more season in 1992, at AA Huntsville and AAA Tacoma in the Oakland system, ending his career.

Grunhard returned to the game in 2011, serving as hitting coach for the independent Joliet Slammers, signing on after working with the team as a recruiting coordinator.

He then helped coach the team to the 2011 Frontier League championship, crediting a team approach to hitting in getting them there.

"You can never tell which hitter helps you get to the championship," Grunhard told SlammersBlog in September, "it's the team approach to hitting that gets you to the championship. Each hitter has to contribute in order to be successful and that's really what we've encouraged."