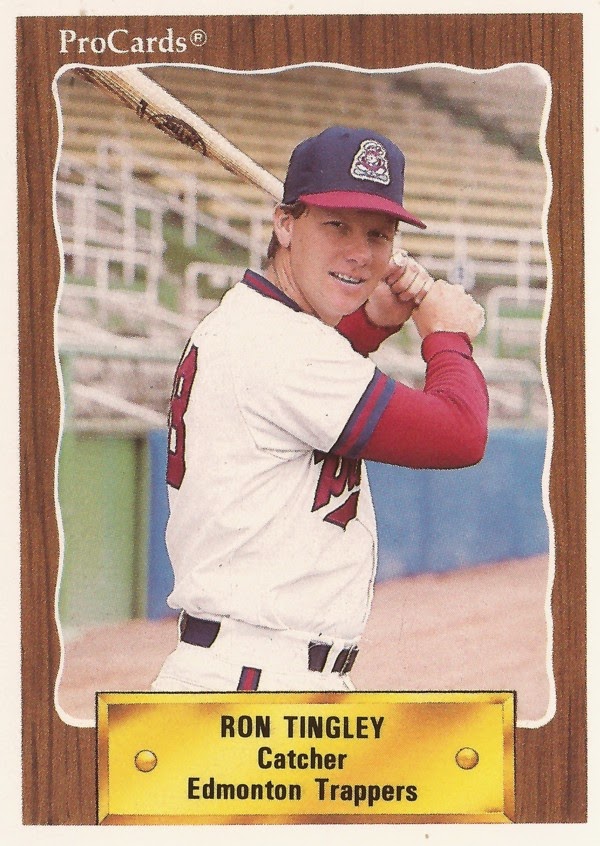 Ron Tingley hated looking backward, he told The Los Angeles Times in 1991. He hated it because looking back, there was just frustration.

Now, in June 1991, Tingley was in the midst of his longest stint in the majors of his career. To that point, his stint had lasted 12 appearances.

"I've played all over in 15 years, from Canada to South America, and it has been an up-and-down journey," Tingley told The Times. "Hopefully I can turn things around and stay on an upswing for the next five years."

Tingley's career continued on an upswing. By the time it was over, he'd played in a total of 278 major league games played over nine seasons. The upswing hit its height in 1992 with the journeyman catcher getting into a total of 71 games for the Angels.

By the time that five years was over, Tingley's career was finally over, ending after two decades as a pro.

Tingley's career began back in 1977, taken by the Padres in the 10th round out of Ramona High School in California.

Tingley played that first year at short-season Walla Walla. He made AA at Amarillo for the first time in 1979 then made AAA Hawaii in 1982. It was also in 1982 that Tingley first made the majors, with San Diego.

With the Padres that September, Tingley got into eight games, 20 at bats. He got two hits.

Tingley didn't make the majors again for six more seasons, until 1988. In the meantime, Tingley played 1983 at AAA Las Vegas, had a shortened three-game season with the Mariners at AAA Salt Lake City then went through Calgary, Richmond, Maine, Buffalo and Colorado Springs.

After his 45 games in 1991, Tingley could concentrate on playing in 1992, getting into 71 games. In July, Tingley hit the back end of back-to-back home runs in a win over the Tigers.

"He was behind in the count, so I knew he had to come down the middle," Tingley told The Associated Press of that home run.

But it wasn't hitting that the catcher Tingley was there to do. He hit just .197 on the season. But he caught in 69 games, committing four errors and catching 23 runners stealing.

Tingley got into another 58 games in 1993, then signed for 1994 with the Marlins. He played 19 games with Florida, serving as the catcher for knuckleballer Charlie Hough. Released in June, there was talk that Tingley's career might be done.

"If it's over and done with," Tingley told The South Florida Sun-Sentinel, "I've had a good time. I'm not going to cry over this. That would be ridiculous. This game's not that important. As soon as some other guys around here realize that, they'll probably have a lot longer careers."

But it wasn't quite over for Tingley. He signed on with the White Sox for five games to finish out the strike-shortened career. He then returned in 1995 for 54 final games with the Tigers.

Thirteen final games in the minors in 1996 and Tingley's long career finally ended.