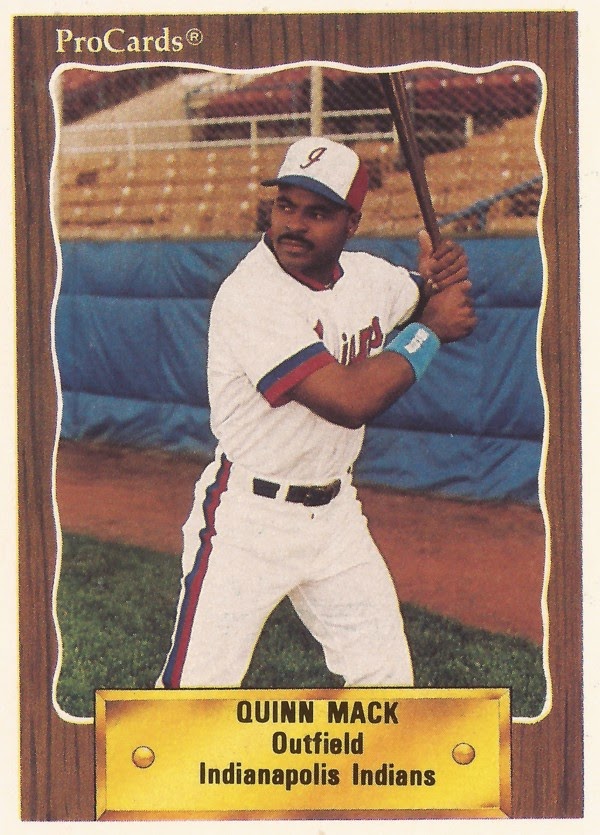 Quinn Mack was used to getting advice from his older brother. Quinn would give advice right back, according to the South Florida Sun-Sentinel.

Now the advice was in the form of how to get to the majors, something Quinn's brother Shane Mack had already accomplished.

"My goal is to play major league baseball (and) I'm not going to let anything get in my way," Quinn Mack told The Sun-Sentinel in 1988.

Quinn Mack would eventually get there, six years later. But his stay would be a short one.

Quinn Mack spoke to The Sun-Sentinel the year after he signed on with the Expos. He signed as an amateur free agent out of UC-Santa Barbara.

He was immediately sent to single-A Burlington, Iowa, for 1987, then to West Palm Beach in 1988. In June 1988, the outfielder was credited by the Palm Beach Post with an outstanding diving catch on a sinking line drive.

He made AA Jacksonville in 1989 and AAA Indianapolis in 1990. In July 1989, Mack earned Southern League Player of the Week honors, as the lefty hit .542 with four home runs in a week's span.

But he got stuck at AAA with the Expos into 1993, until he was finally released that April.

Mack's release by the Expos would prove to clear his path to the majors. He signed on with the Mariners, spending the rest of 1993 at AAA Calgary. He returned for 1994. Then, in June, Mack got the call up. He also had the debut every player dreams of.

Against the Royals June 16, 1994, Mack went 3-5 with two doubles. One of those two doubles came in his first major-league at-bat. Mack had only been called up hours earlier, then placed in the lineup when regular outfielder Eric Anthony got sick, according to the wire account.

Three days later, in his fourth major league game, Mack was the center of attention, for the wrong reasons. Mack was playing center field, as regular center fielder Ken Griffey Jr. was the designated hitter. Manager Lou Pinella planned to put Griffey in the field in the eighth. But he waited too long, according to the wire account.

In the seventh, Royal Greg Gagne hit a liner off Mack's glove for an inside-the-park home run. It was initially ruled an error, but then overturned to a home run, according to the wire account. Regardless, Pinella wasn't happy.

"You've got to catch the ball," the manager told reporters afterward.

Mack stuck around in the minors through 1996, also playing in Mexico, before finally hanging it up.

Midway through 1996, Mack returned from Mexico to play AA ball for the Marlins at Portland, Maine. His time was notable in that he hit a home run in his first at-bat at Portland's three-year-old Hadlock Field, according to the Lewiston Sun-Journal.