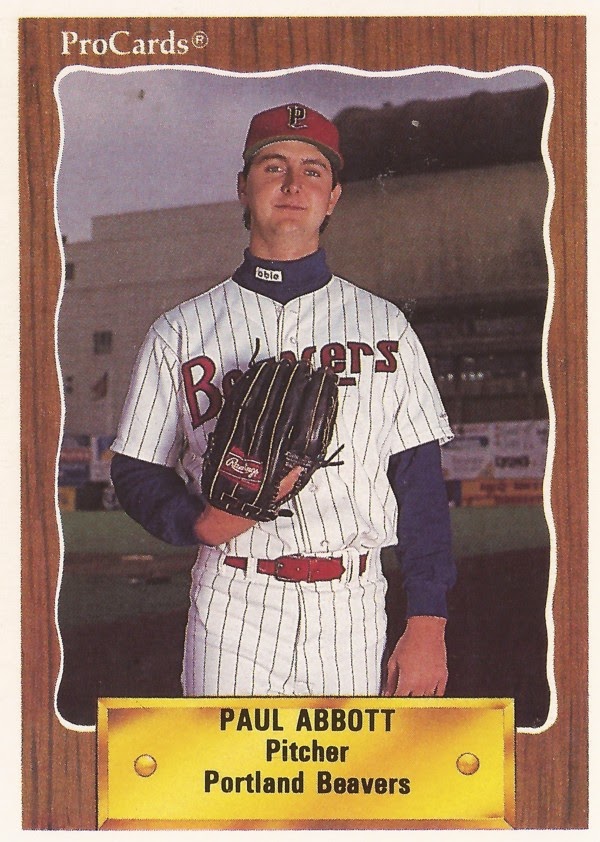 Paul Abbott spent time in the majors in parts of four seasons, from 1990 through 1993. He didn't make it back to the majors for five more years, until 1998, injuries helping to conspire to keep him in the minors.

"Coming back from those injuries taught me a lot," Abbott told The New York Daily News before his 2000 ALCS start. "(I don't take) things for granted."

Abbott ended up playing in parts of 11 major league seasons before his career was finally out in 2004. That year was also his 20th professional season, his start coming back in 1985, taken by the Twins in the third round of the draft.

Abbott played that first season at rookie Elizabethton. He spent the next three seasons in single-A, at Kenosha and Visalia. He made AA Orlando in 1989, then AAA Portland in 1990.

He also made Minnesota in 1990, debuting Aug. 21. In that debut, Abbott went just three innings, giving up seven runs. He also walked five. The Twins lost 8-7.

"I got enough run support and I just couldn't capitalize," Abbott told The Associated Press afterward. "Obviously I was out of control at times. My whole career, it has been walks."

Abbott started seven games for the Twins that year, he lost five and won none. His ERA was 5.97. He returned to Minnesota for 1991, getting into 15 games, mostly in relief. He had six relief appearances with the Twins in 1992.

He signed with the Indians for 1993, starting five games. He got his next major league start five years later, in September 1998. In the meantime, he went through the Royals, Cubs and Padres systems. He landed with the Mariners for 1997.

"This was huge," Abbott told The AP after that win. "It's a monkey off my back. ... something I really needed to do. I was nervous, but I've been working too hard and come too far to beat myself."

Two years later, he took a no-hitter into the eighth inning. On Sept. 3, 2000, Abbott didn't give up a hit until one out in the eighth.

"You always shoot for a no-hitter," Abbott told The AP after that performance. "Once you give up a hit, you shoot for a shutout. Then you shoot for a complete game. That's basically how you attack your game plan."

In 2001, Abbott posted an ERA of 4.25, but he also went 17-4. At one point, he won nine in a row. In the ALCS that year, Abbott pitched five no-hit innings against the Yankees in Game 4. But he also walked eight and picked up the loss.

Abbott returned to Seattle for 2002, but he only got into seven games, starting five. In those outings, he went just 1-3, with an ERA north of 11. He finished out his career with the Royals in 2003 and the Devil Rays and Phillies in 2004. He played one more year in independent ball in 2005, finishing out his career.

Abbott, however, is still in baseball, serving as a coach in the Golden Baseball League and, in 2011, as pitching coach for the short-season Lowell Spinners.