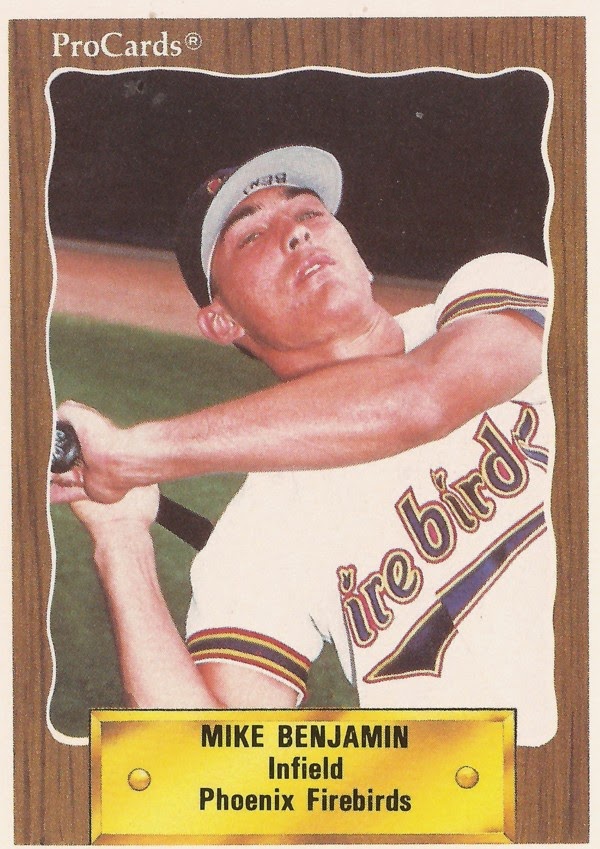 Mike Benjamin never hit well - his career batting average was just .229. But, in three games in June 1995, he hit with the best of them.

In those three games, Benjamin collected 14 hits, the most ever by anyone over a three-game span.

"I'm not going to pinch myself for another three months," Benjamin told The Associated Press after his feat. "It's hard to believe with the role that I'm in. You don't think a whole lot of records are realistic. The guys who play every day have the best chance of accomplishing them."

It was a highlight of Benjamin's career, one that even got him into the Hall of Fame for a year or two. But, despite his outburst that June, he only got 27 more hits in 68 total games that year, for an average of just .220.

But, despite his general hitting woes, Benjamin went on to a career that spanned 13 big league seasons. He was useful in other ways though, in the field. He played each infield position at some point in his career, he even pitched for an inning.

Benjamin's career began in 1987, selected by the Giants in the third round of the draft, out of Arizona State. He'd won First Team All-American honors with the Sun Devils that year.

In the pros, Benjamin made AA Shreveport and AAA Phoenix his second year out. In his third, he made his major league debut. Benjamin got into 14 games that first season, getting just six at bats. He returned for a second season in 1990, getting into another 22 games.

In June 1993, Benjamin was hitting .153. He turned to the batting cage and Giants hitting coach Bobby Bonds. In another three-game span, Benjamin went 3 for 9, with two home runs.

"You can go in the cage and swing all you want, but you don't know what it will be like until you get on the field, Benjamin told The AP that June. "Today was just go out and swing."

"I thought they were going to give me the silent treatment in the dugout,'' Benjamin told The Hartford Courant of that first home run. "They didn't. They must've forgot because they were so shocked."

Benjamin landed with the Pirates for 1999. But he again started slowly. He started the year 0 for 15, The AP wrote in mid-April. But he broke out April 18 with a double and triple, scoring both times.

"I had some bad at-bats," Benjamin told The AP. "But I've had this happen to me before. I hit a lot of balls hard that have been caught."

Benjamin is now in his second year as a coach back at his alma mater, Arizona State. His son, Mike Benjamin Jr., was a freshman infielder on the team for 2011,

In one early May 2011 game, the younger Benjamin hit a two-run home run, it was his first hit of his college career. Waiting for him at third base was his father, The Arizona State Press wrote. The father shook the son's hand.

"The guys were all over me in the dugout," the younger Benjamin told The Press. "Just watching all the players come through here and having my first hit as a home run makes it special."