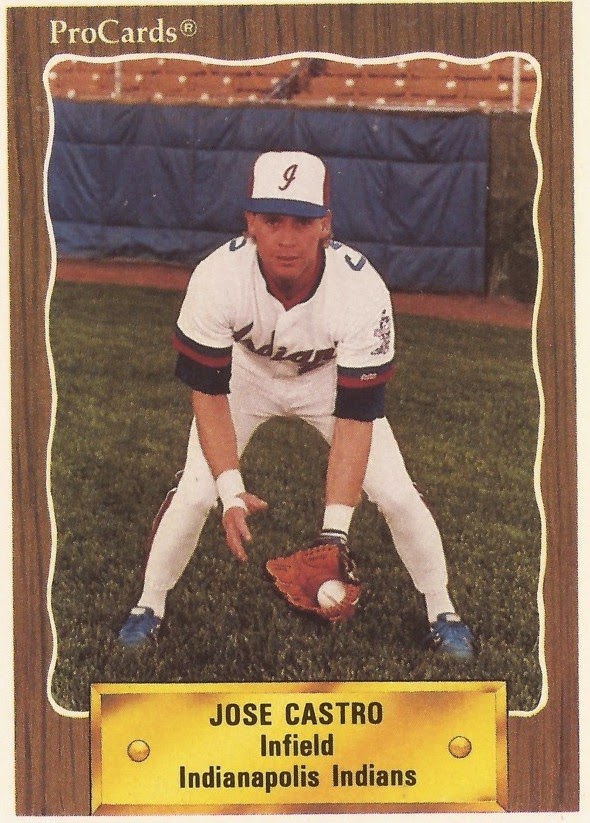 Jose Castro didn't start playing baseball until he was 13, he told The Chicago Tribune as spring 1985 wound down. That was seven years after he and his family came to the United States on a boat, fleeing Cuba.

"Ever since then," Castro told The Tribune of the time he started playing the game, "it's been my dream. I used to go to the stadium in Miami to watch the Orioles. Tonight, I get to go on the same field and play against them. Unbelievable.

Castro spoke to The Tribune, one of the candidates for the White Sox' final roster spots. Castro didn't make it that year. He didn't make it in any of his 14 minor league seasons. But he did make it, years later, in one brief stint as hitting coach for the Seattle Mariners.

Castro's career began in 1977, selected by the Phillies in the 27th round out of high school. He played that year at short-season Auburn, the next at single-A Spartanburg. At Spartanburg, Castro hit .280 with nine home runs.

His fifth home run came in a June game, a three-run shot. He also had a two-run double. He only had one home run in his first campaign, The Spartanburg Herald-Journal noted.

"I've been waiting more on the pitch and holding my hands back a little. I've got some power in me," Castro, then 5-feet, 9-inches and 155 pounds, told The Herald-Journal laughing, "but with my size, I've just got to hit it right."

The next year, Castro got his first look at AA, at Reading. He had three hits and three RBIs in one August 1980 game for Reading.

In 1981, Castro got his first look at AAA, at Oklahoma City, hitting his ninth of 11 home runs in a July game. Through five different organizations, Castro would stay at AAA the rest of his playing career, amounting to 10 seasons at the doorstep to the majors.

He hit a two-run single in a June 1982 game for he White Sox' Edmonton AAA team. In an August 1983 game, Castro hit two home runs for the White Sox' Denver AAA team.

In 1984, Castro made the All-Star team with Denver, hitting .316 with 12 home runs. The next spring, he made it to the end of camp with a shot to make the White Sox roster, The Tribune wrote. But he didn't make it.

There was even talk May 17 that Castro would be brought up, if infielder Julio Cruz went on the DL, The Tribune wrote. Cruz didn't return until June 4. But Castro never got the call.

Instead, it was back to the White Sox' AAA team, then in Buffalo. Castro's numbers dropped that year at Buffalo. He hit just .240 with eight home runs. It was his last of four seasons with the White Sox system. He went on to spent two seasons at AAA for the Blue Jays, then two more at AAA for the Royals.

For 1990, the 32-year-old signed on with the Expos, playing at AAA Indianapolis. Castro played 19 games before being released in May.

"I've played this game for 14 years," Castro told friend Steve Fireovid after his release, according to Fireovid's diary of that season The 26th Man. "I always knew someday it'd be over. I guess that's today."

That's when Castro's next career started. Castro was given the option to coach the Expos' rookie league team in West Palm Beach, Fireovid wrote. He went on coach AA Portland in 1994, AAA Ottawa in 2002 and, in 2008, serve as hitting coach for the Seattle Mariners.

In 2010, Castro served as manager for the Mariner's AAA club in Tacoma, gauging how long other players might be away from the majors.

"(Dustin) Ackley is a true professional, in all the meaning of that word," Castro told The Seattle Times of the Mariners' prospect. "He comes to the park, prepares himself — and the boy can hit. He's going to be a good one at the major-league level."