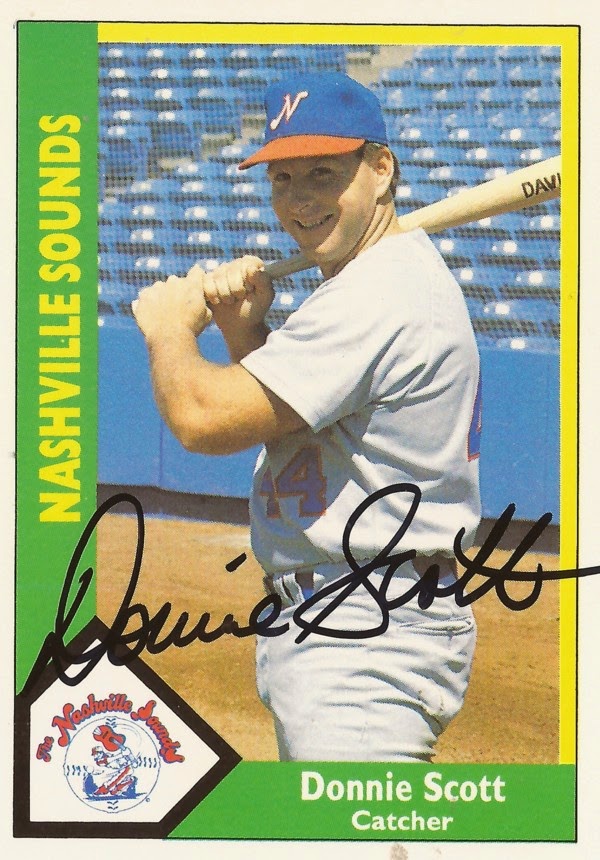 This was September 1983, the conclusion of his fifth season as a pro, and he had just gotten his first call to the majors.

"I just got numb," Scott said of his reaction to being called up, "and I got nervous at the same time."

Giving him the news, he recalled, was his manager at AAA Oklahoma City, Tom Burgess broke the news.

"It is so neat probably for coaches to be able to tell a player, 'hey, you're going to the big leagues,'" Scott said. "I never have gotten the opportunity to do that, but I know how special that must feel."

Scott went on to play in four major league seasons. He's also gone on to a long career as a manager in the minors and in summer college ball.

The Greatest 21 Days caught up with Scott in August in Kalamazoo, Mich. That's where Scott's Madison Mallards were taking on the Kalamazoo Growlers in collegiate Northwoods League action.

From the visitor's clubhouse at Kalamazoo's Homer Stryker Field, Scott recounted his career, starting with growing up learning to switch-hit in Florida. He also told of signing his first pro contract and making the majors.

Scott's major league career was one that spanned nine years, but one where he saw time in just four individual seasons. Along the way, he hit home runs from both sides of the plate in the same game. He also ended up on the wrong side of a perfect game, Scott's catching proving crucial to the only run scored in the game.

Scott then went on to his long minor league managerial career with the Reds. Since then, though, he's found a home coaching college kids in the summer, in the Northwoods League. This past summer was his second with Madison. In 2011, he coached Battle Creek and won league Manager of the Year honors.

Scott's own road to the majors began with a jump directly from high school. He was still learning to catch. He was also still perfecting switch-hitting.

But Scott also recalled those early years putting too much pressure on himself to perform.

"That's why I am the way I am with kids now," Scott said. "I don't like them feeling a lot of pressure because I know what that's like.

"I was probably the worst about being too hard on myself," Scott added, "and that's why I try not to be like that with players, even now."

It was Scott's first year at AA and his poor season, Scott recalled, resulted in him having some doubts about whether he'd make it. But then he went to winter ball, did well and got back on track.

He recalled getting through those doubts by just working harder.

"I ended up playing the game for what it was and not for what it is, if that makes any sense," Scott said. "I started to play in between the lines and forgot about all the other stuff, the money, whatever, prestige, and really enjoyed the game."

Scott returned to AA in 1982. He then made AAA Oklahoma City in 1983. It was that September that he got his call up to Texas.

Scott recalled getting the news. His first call was to his parents. He recalled each having distinct reactions.

"My dad was his same old self, 'congratulations,' level-headed," Scott recalled, "and my mom was screaming."

Scott finally debuted as a late-game defensive replacement Sept. 30. His first at bats, though, didn't come until the final game of the season.

Scott got to the plate four times. He also recalled hitting the ball on the nose all four times, but he didn't get a hit.

"I went the whole winter saying 'Please, don't let anything happen to me,'" Scott recalled, "'because I've got to get back.'"

Scott ended up starting 1984 back at Oklahoma City. His next call up came, but not until June.

"I waited all that time and in my first at bat, I got a base hit off Matt Young," Scott recalled. "As soon as I got to first base, I was like, 'Thank you, God, I appreciate that.' It meant a lot."

Scott ended up getting into 81 games for the Rangers that year. He spent the time platooning, he recalled, mainly hitting left-handed off of right-handers. He hit .221 on the year.

On the final day of the season, though, no Ranger could get a hit, or even on base. It was a perfect game. Those offensive struggles also magnified Scott's defense, where one mental lapse led to the game's only run. (Go to Part 3)