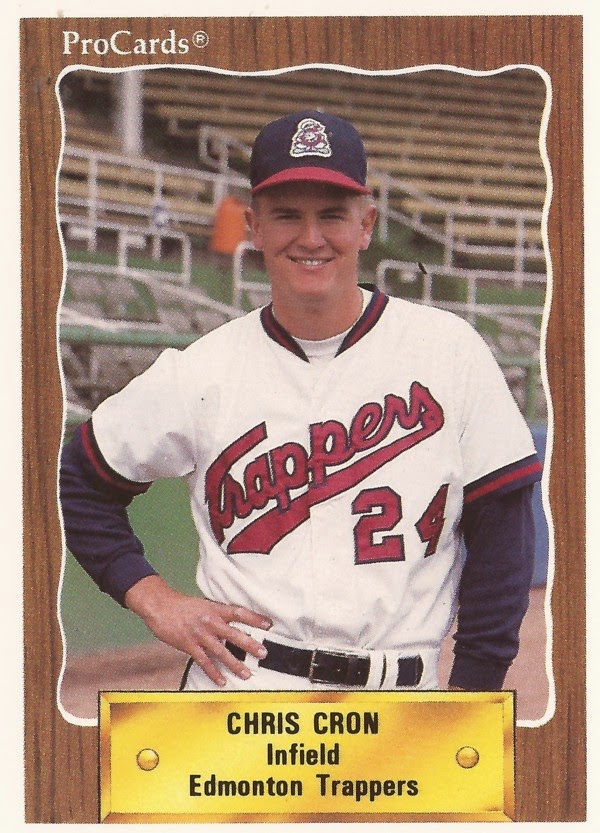 Chris Cron's playing days were done by late 1995, he was now starting on his managing career.

"Chris was the kind of kid who grew up eating and sleeping baseball," Gullotti told The Times. "He loved everything about it. He would talk about it and think about it all the time. I think he'll do well as a manager. He has the right personality for it. He has a non-threatening manner, and he's easy to talk with and get along with. I think that's what it takes these days."

Cron had been eating and sleeping baseball professionally for 12 seasons by 1995. His career began in 1984, taken by the Braves in the second round of the January draft. He played that season at Pulaski in the Appalachian League, the same league he would start his managerial career in years later, at Bristol.

At Pulaski, Cron hit .368, earning a promotion to single-A Sumter for 1985. Cron would stay in single-A through 1988. In between, he was released by the Braves and signed by the Angels. It was with the Angels that Cron would finally make the majors in 1991, in his eighth season.

Cron started with the Angels at single-A Quad City in 1987, then moved to single-A Palm Springs. He made AA Midland in 1989, then AAA Edmonton in 1990.

By June 1991, Cron had been in the minors for eight seasons and he was hoping for that call.

"Five years in Class-A makes you appreciate what you've worked for now," Cron told The Times. "I stayed because I love the game so much. My wife has stuck by me through thick and thin, so I've got to give her a lot of credit."

Cron got the call that August, getting into six games for the Angels. He went 2 for 15.

Cron, however, likely would have gotten a longer look, were it not for long-time Angels first baseman Wally Joyner. Cron left the Angels that off season for the White Sox. Joyner also left, for the Royals. Joyner's expected replacement Lee Stevens also did poorly.

With the White Sox, Cron got into another six games. And that was it. The White Sox, it turned out, also had a host of players ahead of Cron, including Frank Thomas and Robin Ventura.

"Now, you look at the situation, and people say, 'Why'd you leave the Angels?' " Cron told The Times in 1993. "With Wally gone and Lee struggling, I could have had a chance there. Now, Frank and Robin have been awesome, George Bell is doing the job, Bo Jackson is healthy - the situation is bad for me to make the big leagues. I just have to keep putting up big numbers and hope someone notices."

Cron played 1993 at AAA Nashville. He didn't make it back to the majors. He spent 1994 with the Indians at AAA Charlotte, then a short stint back at Nashville for 1995, ending his playing career.

For 2011, Cron jumped to the Tigers system, taking the reins of the AA Erie SeaWolves. Speaking to The Erie Times-News about his appointment as Erie manager, Cron recalled his major league playing days.

"It was only for 41 days and 25 at-bats," Cron told The Times-News, "but it was special time. It's something on your resume that will never go away."