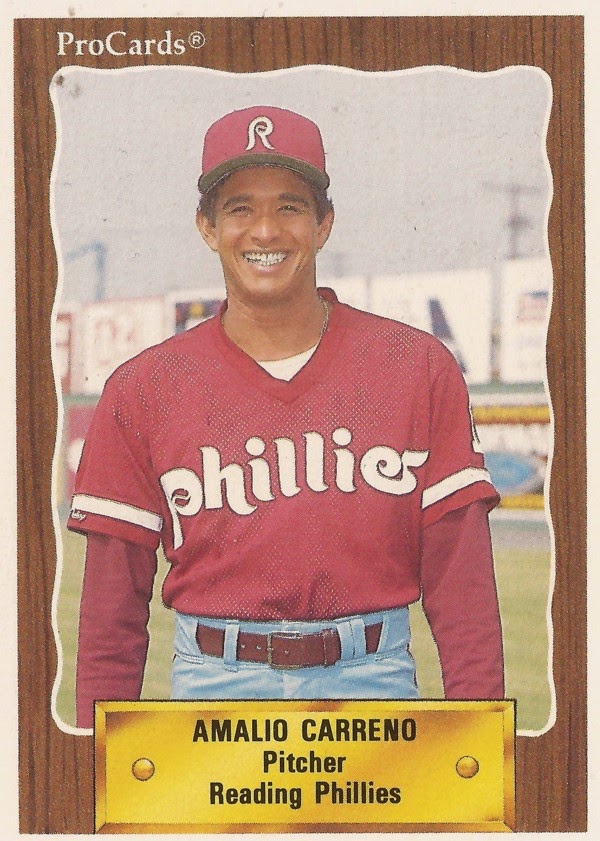 Amalio Carreno's manager at AA Albany saw a possible major leaguer in Carreno in 1988, according to The Albany Times-Union.

Carreno just had to work on a particular pitch to make it, manager Tommy Jones told The Times-Union.

"I compare him a lot to (Cecilio) Guante," Jones told The Times-Union. "The forkball is his pitch. It will be his pitch for him to have a legitimate shot at becoming a major- league pitcher. He has to throw it for a strike."

Carreno did eventually make the major leagues. His stay, though, was brief. Three tough relief outings in 1991 for the Phillies marked the extent of his big league career.

Carreno's professional career began in 1983, signed by the Yankees as as free agent out of his native Venezuela.

Carreno first hit the field for the Yankees in 1984, in the rookie Gulf Coast League. He played parts of three seasons in the GCL. His first time above that level came in 1986 at single-A Fort Lauderdale.

In 1987, he made single-A Prince William. He also made AA Albany-Colonie and AAA Columbus. He got nine outings, three starts, at Albany. He went 0-3, with a 7.88 ERA. At Columbus, it was 11 relief outing and a 7.79 ERA. He went three innings, giving up four earned in a July game against Glens Falls.

Carreno returned to Albany and Columbus in 1988. He was also traded mid-season to the Phillies for Luis Aguayo. He spent the rest of the year at AA Reading.

Carreno spent 1991 at AAA Scranton. In 33 outings, eight starts, he posted a 5.33 ERA. That July, though, Carreno made his major league debut after Roger McDowell was placed on the disabled list.

Carreno debuted July 7. He went 2.1 innings, giving up three earned. Two of those runs came on a double. He then got a third of an inning July 13 and two thirds July 14.

The July 14 outing also resulted in Carreno giving up another three earned on a Will Clark home run to left.

"I've been hitting quite a few home runs to left field," Clark told reporters afterward. "The Phillies have been pitching me inside, but the homer was a slider on the outside of the plate."