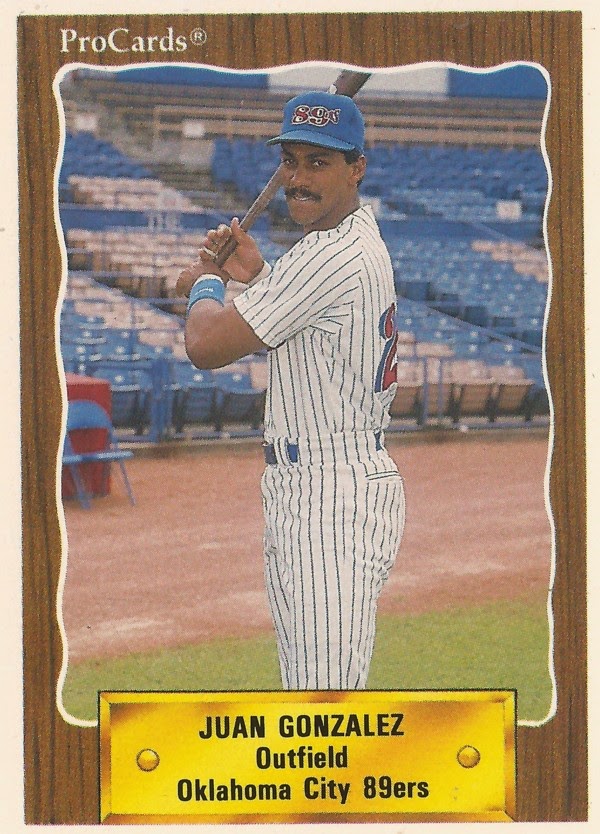 Juan Gonzalez hadn't won an MVP award yet, but, by then end of the 1993 season, he had completed his second-consecutive season with more than 40 home runs and third-consecutive topping 100 RBIs.

So, when the Rangers announced in February 1994 that they'd signed Gonzalez to a long-term deal - five years, $30 million - Rangers president Tom Schieffer could be excused for being a little excited.

"This kid is going to be in the Hall of Fame, and if anybody is worthy of it, he is," Schieffer told The Associated Press after the signing. "We have our fourth-place hitter for the next seven years. Now, all we have to do is make sure he stays healthy."

For most of that deal Gonzalez did exactly what Schieffer hoped. He won one MVP, then a second. He helped the Rangers to the playoffs in three separate seasons.

But it was another contract offer, one that Gonzalez didn't accept, that symbolized what should have been the second half of Gonzalez' career.

Offered an eight-year, $140 million contract after a trade to the Tigers for 2000, Gonzalez turned it down. That second half hardly amounted to five seasons, Gonzalez saw his career unspectactularly end on a one swing in 2005.

It ended with Gonzalez followed by injuries and later alleged links to steroid use, steroid allegations Gonzalez would flatly deny.

Gonzalez' career began in 1986, signed by the Rangers out of his native Puerto Rico. After starting in the rookie Gulf Coast League that year, Gonzalez eventually reached AA Tulsa by 1989, then AAA Oklahoma City in 1990.

"I thought I was ready last year, but I tried to have patience and now I'm very happy," Gonzalez told The AP that May.

Gonzalez followed that campaign with his first two 40-plus home run campaigns. In 1993, he also hit .310, garnered his first All Star selection and came in fourth in the MVP balloting. That June, he even recorded 8 RBIs in a single game.

Gonzalez continued his hitting in the Division Series against the Yankees, hitting five more home runs. But Gonzalez' Rangers lost 3 games to 1.

"This was a very emotional series for myself," Gonzalez told The New York Times after the series loss. "This series for myself, I'm hitting a lot. Five home runs in four games, a lot of r.b.i. and we don't score. We lost. We lost."

Gonzalez ended up hitting more than 40 home runs in three-consecutive seasons. In his second MVP campaign, in 1998, Gonzalez hit 47 home runs and knocked in 157 runs.

By the end of the 1999 season, Gonzalez had hit 39 or more home runs in six of the past eight seasons. He knocked in more than 100 runs in seven of the past nine seasons.

After all that, the Rangers traded him to the Tigers that December in a 10-player deal. Going into the spring, the Tigers looked to lock Gonzalez up long-term, with the 8-year, $140 million offer. But Gonzalez turned them down.

"It's a big question for me, a big decision," Gonzalez told The Times in May. "It's a good organization, and it's treated me so great. They have good fans, a great tradition. But it's a big decision, I want to wait ... maybe after the All-Star break, maybe at the end of the year."

By those benchmarks, though, Gonzalez' value had dipped significantly. By the end of the year, he'd hit .289 with 22 home runs in just 115 games.

His last injury, a torn hamstring, came on his only at bat of the 2005 season, his final one in the majors.

By the end of 2007 Gonzales had been accused of steroid ties twice, first by one-time teammate Jose Canseco in Canseco's landmark 2005 book "Juiced" and then in December 2007, when Gonzalez' name appeared in The Mitchell Report, tied to bag with steroids found in October 2001 at the Toronto airport.

In spring 2008, Gonzalez made one last comeback attempt, with the Cardinals. He also denied ever using steroids.

"I'm clear," Gonzalez told The AP that spring. "I've never tested positive. I don't have a problem. I will continue with my head up and try the best inside the lines. I never used it."

Gonzalez didn't make the Cardinals in 2008. In 2011, he made his first Hall of Fame ballot, getting 5.2 percent of the vote, barely over the minimum to remain on. In 2012, he dropped below that minimum, 4 percent. He also dropped off the ballot.