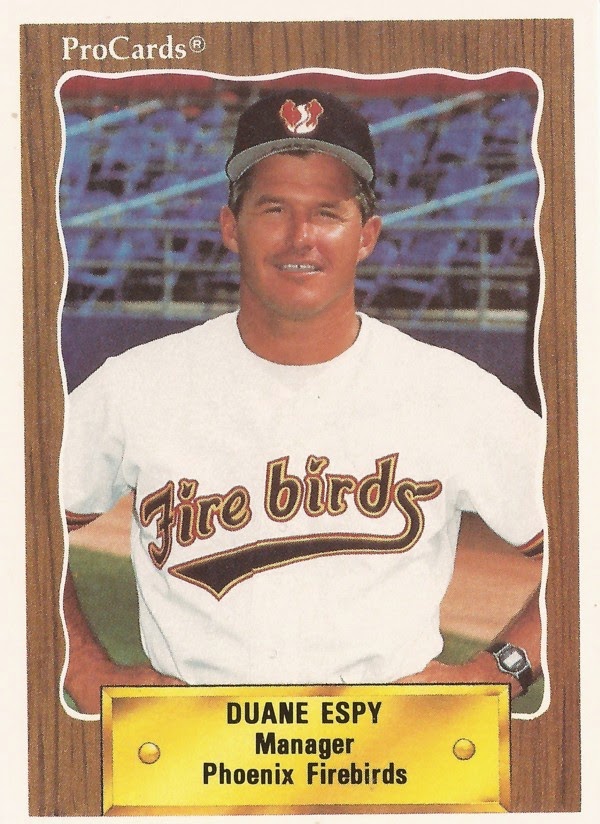 Duane Espy had just spent four years as the Colorado Rockies hitting coach. But, in 2007, he was back in rookie ball, serving as hitting coach for the Casper Ghosts.

It was a transition, but nothing Espy hadn't gone through before, The Casper Star-Tribune wrote that July.

"I think, no matter where you are in this game or what you're doing, every day is another chance to experience something," Espy told The Star-Tribune. "There's always going to be something if your eyes are open and you're willing to experience it."

Espy has been experiencing a lot in his time in baseball. It's a career that recently entered its fifth decade, going through the minors first as a player, then as a manager and a coach. He's also made the majors, serving seven years as hitting coach for the Rockies and the Padres, a place he never got to as a player.

Espy's career began back in 1970, taken by the Brewers in the 7th round of the draft out of Santa Monica High School. He spent eight seasons in the Brewers system, first playing in 1971 and ending in 1978. He first hit AAA in 1973, hitting .245 at Evansville.

He also went through AA Shreveport, Thetford Mines and Berkshire, then AAA Sacramento and Spokane before his career was out. In May 1978, his final season as a player, an Espy 12th-inning double helped Spokane to a 5-4 win.

His playing career over, Espy began his managing and coaching career, taking the helm of the Brewers' single-A team Burlington. By 1982, Espy was in his second year managing at single-A Stockton, taking his team to the second-best record in the league.

Espy also underwent among the first of his organizational changes. He was fired.

"It was a surprise to me in that, from the team's performance and what I heard, I assumed everything was going fine," Espy told The Milwaukee Journal after being let go.

Espy landed with the Giants, managing a step up at AA Shreveport. He also watched over one of his pitchers, Dave Wilhelmi, as he threw a perfect game that May.

Espy stayed with the Giants system through 1994, managing at Shreveport, San Jose and Phoenix and later as Phoenix hitting coach.

For 1995, Espy moved on to the Padres system, serving five seasons as a roving hitting instructor. In June 2000, after another organizational change, Espy made the majors, as San Diego's big-league hitting coach.

Espy spent the next two seasons with the Padres, before signing on with the Rockies in the same position. In 2004, Espy watched over the development of rookie Matt Holliday.

"I think people get too caught up in, 'I've got to make some changes. I've got to do something drastic,'" Espy told MLB.com that April. "Pitchers don't throw the ball where they want to all the time. As long as he keeps it simple and stays in position to get his swing off, he should be able to do what he can do."

Espy stayed in Denver through 2007, getting bumped down to Casper for 2007. He spent 2008 through 2010 as hitting coach for single-A Modesto. For 2011, Espy has returned to the manager's office, heading to the Rockies' AA team in Tulsa, working with the Drillers' hitting coach Dave Hajek.

"The fact that I know these guys and know what they're capable of and what worked as far as we did together, that will help," Espy told The Tulsa World in February 2011. "I won't be working with them in the same capacity, but me knowing these things, does that speed up things for (Drillers hitting coach) Dave (Hajek) and the players? Absolutely."