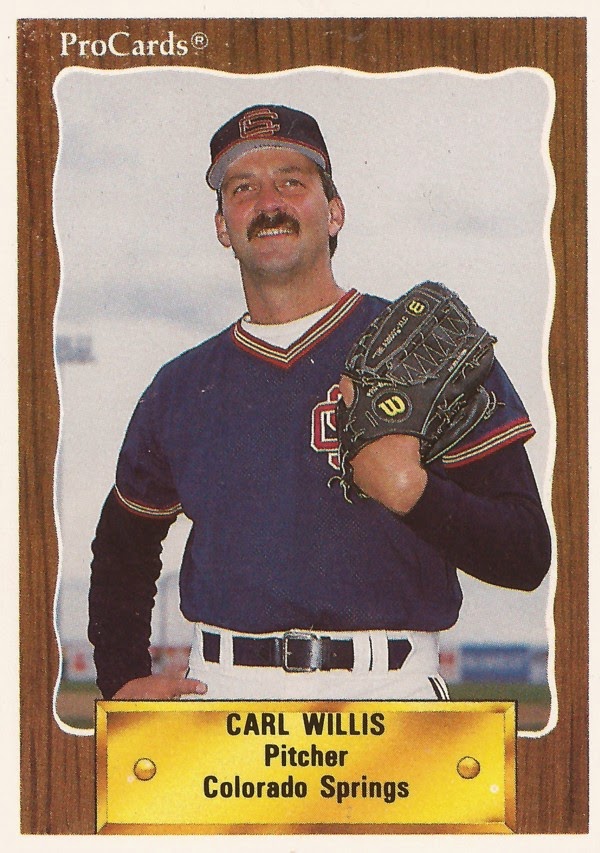 As Carl Willis prepared to watch Game 1 of the 2009 World Series, he could only marvel at the pitching matchup. It was Cliff Lee vs. CC Sabathia, both pitchers Willis nurtured as a long-time pitching coach for the Cleveland Indians.

"They have been the deciding factor in every game they pitched, no matter the team or the bad weather," Willis told Yahoo! Sports before the game. "It's, I don't know, I sit back and I can’t believe I was a part of these two guys. Hey, I’m biased, but they’re the best two starting pitchers in the game. I really believe that."

Willis served as a pitching coach with the Indians organization for more than a decade, watching over the development of both Lee and Sabathia, pitchers who would go on to dominate the game.

Willis became a pitching coach after his own pitching career, where he didn't exactly dominate, but he hung on long enough to pitch in nine major league seasons. He also pitched in and won his own World Series.

Willis' playing career began in 1983, selected by the Tigers in the 23rd round out of UNC Wilmington. He made the majors one short year later, helped along by Tiger injuries.

"I guess I've been at the right place at the right time," Willis told The Associated Press that June. "But it all boils down to my performance and what I do on the mound."

Willis pitched in 10 games for the Tigers that year, before being traded in August to the Reds. In all, he got into 17 games that year, posting an ERA of just under 6.

In May 1988, Willis wasn't sure the White Sox had room for him in the majors. He saw that as an opportunity, he told his hometown Wilmington Morning Star.

"That's good for me, because that gives me a chance to put together some good numbers," Willis told The Morning Star. "I want to put together such a good season that when they have to make changes, they'll have to look at me."

He did make it, in July for six games. After a stint with the team he would later coach for, the Indians at AAA Colorado Springs, Willis landed for 1991 with the Twins. With the Twins, Willis found his playing home.

That year, Willis pitched in a career-high 40 games, with his ERA well under control at 2.83. In July, he helped beat his old team the Tigers, and Tiger Manager Sparky Anderson, who once compared Willis to Rollie Fingers.

"I have always pulled hard for him to do a good job," Anderson told reporters after Willis went 4.1 innings without giving up a hit, sealing the Twins victory over Detroit. "I just wish he wouldn't do so well against us."

Willis continued his clutch pitching into the postseason, getting into seven games for the Twins, four of those in the World Series. His final outing came in the pivotal Game 6, throwing 2.2 innings, giving up a single hit.

Willis had made it to the game's biggest stage. But it was too late for his grandmother, Ethel Shelton, whom he described to The Chicago Tribune as his inspiration. She died four years earlier, as he was still struggling to stick.

"If I could change anything, I'd make it so she could see me," Willis told The Tribune before Game 3. "I think she is seeing me. I know she's seeing this, and she's getting a big kick out of it."

Willis went on to pitch for the Twins over the next three seasons, getting into no fewer than 49 games a season. The end came with three games in 1995, three final outings with the Twins.

By 1997, Willis was coaching in the Indians system, at short-season Watertown. The next year, Willis arrived at rookie-league Burlington. Also arriving there was Sabathia. Cliff Lee came in 2002, in trade from the Expos. Willis became Indians pitching coach in 2003, under Eric Wedge.

Willis watched as Sabathia won the 2007 Cy Young and Lee won the 2008 award. By the end of 2009, all three, Sabathia, Lee and Willis were gone from the Indians.

With Wedge returning to managing in Seattle, where Willis was named interim pitching coach mid-season, it was an easy choice for Wedge to stick with Willis.

"You look at his track record, obviously with CC and Cliff, from a development standpoint and so many others," Wedge told reporters in November. "Then you also look at bringing in veteran players, such as a [Kevin] Millwood or a [Carl] Pavano ... that were maybe at the crossroads at their career at the time and he got them going."