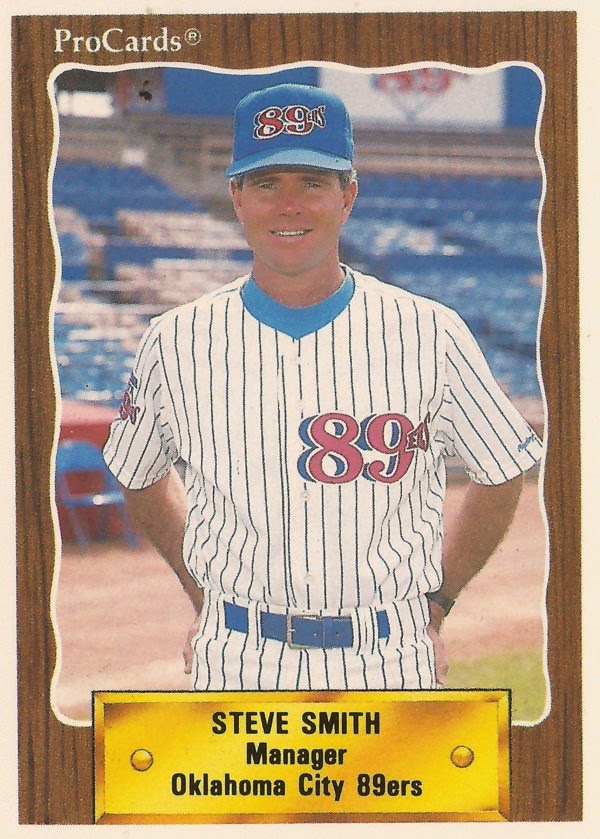 Tossed from a June 2007 game, Phillies coach Steve Smith received a three-game suspension. The suspension was over a dispute with an umpire.

It wasn't something new to the coach. The previous year, the coach had gotten five games for inadvertantly spitting chewing tobacco in an umpire's eye, MLB.com wrote.

"Do I think [three games is] harsh? Yeah," Smith asked MLB.com that June. "They explained it was because I came out on the field. That's one day. The other two days are for my history. I've been thrown out a few times over the years."

Getting thrown out a few times isn't the only thing Smith has done over the years. He's done a lot more.

He's been a player and manager in the minor leagues. He's been a coach in the major leagues. For 2014, he's the third base coach for the Reds.

He's even been on TV and in the movies, as a reality show contestant with his daughter and a movie extra in his youth.

Along the way, he helped assure the Mariners that first round pick should be used on a young kid named Alex Rodriguez and relayed to players what every player wants to hear: That they're going to the majors.

Smith's baseball career began in 1976, selected by the Padres in the 24th round of the draft out of Pepperdine. His playing career lasted seven seasons, all spent in the minors.

He hit AA in 1977 then AAA in 1979. But his playing days ended after 1982, having spent three-plus seasons at AAA Hawaii and none at major league San Diego.

Smith's post-playing career began immediately in 1983, with the 29-year-old managing that year with the Padres at single-A Salem. He remained a minor league manager through 1991, heading up teams from Miami to Beaumont to Wichita.

In 1987, managing AA Wichita, Smith used an unorthodox method to inform hurler Eric Nolte he was making the jump to the majors, according to The Los Angeles Times. Smith disguised his voice in a phone call, saying he was a big fan and asking how long it'd be before he reached he majors.

Smith revealed the joke, then informed Nolte the length of time would be shorter than he thought, The Times wrote.

By 1992, Smith was with the Mariners, as a roving minor league infield instructor. In 1993, the Mariners asked Smith to take another look at the young high schooler, Alex Rodriguez, according to The New York Times. Would he live up to the No. 1 slot?

"I didn't have to look at him swing the bat or take any ground balls," Smith told The Times in November 2000. "You just knew he was a leader right from the start."

Smith later got longer looks at Rodriguez, returning to manage at AAA, then serving as the Mariners' third-base coach from 1996 to 1999.

Smith start with the Indians was highlighted by the continuation of another of Smith's careers: one in film and television.

The continuation concerned a stint on the show The Amazing Race, racing around the world with his daughter. They came in sixth of 11 teams.

"I've got a World Series ring," Smith said on the show after he and his daughter were eliminated. "I have to tell you, people might think I'm crazy, but this jumps ahead of it."

While his daughter got on The Amazing Race with his help, Smith's early film and television career was with the help of his own father, according to MLB.com.

During his playing days, Smith made extra money getting into a host of movies and television shows, according to MLB.com, serving as an extra. Among them were "Blues Brothers," "Backdraft" and the original "V." In "V," Smith was in a group of soldiers watching a Visitor ship land.

"We shot this about 10 times, and the next day, they found one of the soldiers wasn't at attention. It was me," Smith told MLB.com of a shot from "V." "They had to shoot the whole thing again. I was probably the worst extra in the business."