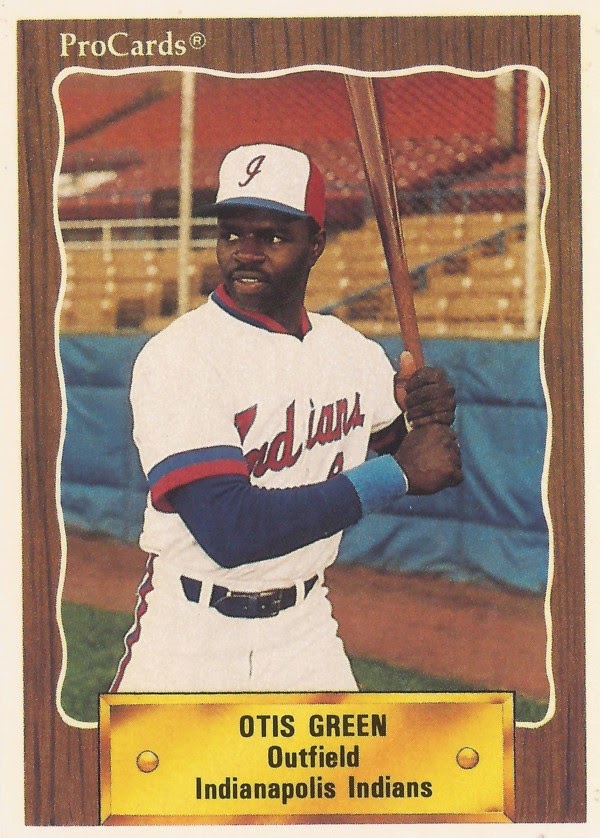 And they did so with no small contribution from Green. He was the team's top pitcher and a pretty good outfielder, too.

"Otis is our No. 1 and we had to win or lose it with him," Carol City coach Pete Hertler told The News after Green hurled them to the championship. "I was confident he'd come through. He's done it so many times in the last two weeks and I knew he'd do it again."

In high school, players like Green are not uncommon, players that both pitch and play a position. Professionally, though, the the list of players that go from one to the other is much shorter. But it's a list that includes Green, starting his professional career using his outfield and hitting skills and ending it using his pitching skills.

And, while Green did well enough between them to last more than a decade in pro ball, he didn't do well enough with either of them to make the majors.

Green's professional career began in 1983, taken by the Blue Jays in the secondary phase of the draft. After Carol City, Green went to and stared at Miami Dade North Junior College, hitting .318.

The outfielder Green played his first year at rookie league Medicine Hat, hitting .315 with 10 home runs. He split 1984 between single-A Kinston and single-A Florence, hitting .261 on the year.

With Florence in April 1984, Green went 7 for 12 in one three-game stretch against Charleston.

"He's really hurt us in these three games," Charleston Royals Manager Duane Gustavson told The Charleston News and Courier. "He's got a lot of ability. Somewhere along the way, we're going to have to reckon with him."

Green hit AA Knoxville in 1985, then AAA Syracuse in 1986. Then his rise stalled. He played at Syracuse for four straight seasons. His best year was his first, hitting .281. Signing with the Expos for 1990, Green played the year at AAA Indianapolis.

Then the outfielder turned pitcher. He signed with the Brewers for 1991 and they let him try pitching. Green started back at high-A Stockton, then moved to AA El Paso. Between them, he went 12-4 with a 2.43 ERA.

Green made the move, he told The Milwaukee Sentinel in February 1992, because he thought pitching would finally get him to the majors. His first year was good enough to get him onto the Brewers' 40-man winter roster.

"We were impressed with his arm strength," Milwaukee farm director Bruce Manno told The Sentinel after the switch. "Each time we saw him we were more impressed."

Green played 1993 with the Angels at AAA Vancouver, then 1995 with the Mariners at AAA Tacoma, ending his career, short of the majors.