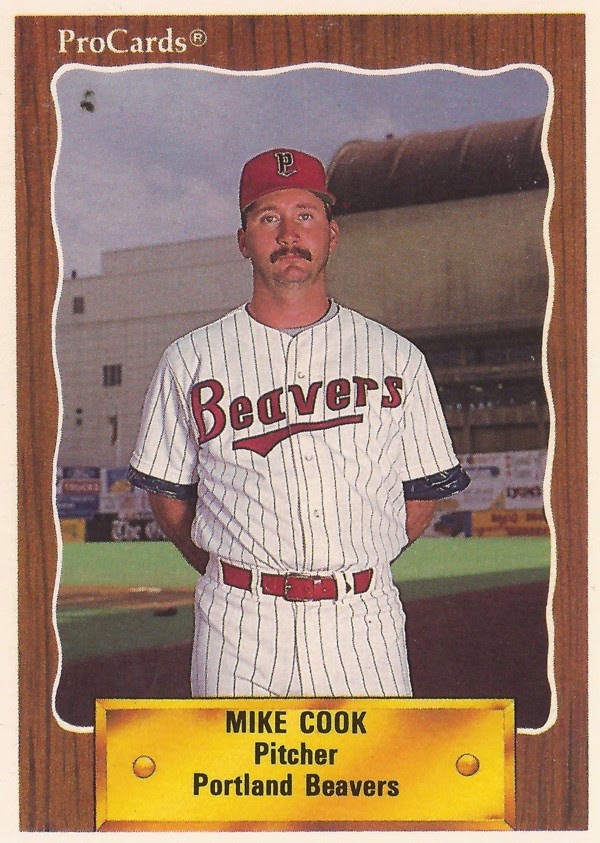 Mike Cook hadn't seen time in the majors since 1989, but a trip to the Caribbean got him noticed by the Orioles for 1993 and he had a shot at getting back, The Baltimore Sun wrote that February.

"I'm not setting my sights on being the fifth starter," Cook told The Sun. "I'm just trying to open some eyes, and then if I do, maybe sometime during the year I can get called up."

Cook did get called up that year, getting into two more major league games, the last two of his big league career.

Cook's career began eight years earlier, in 1985, selected by the Angels in the first round of the draft, out of the University of South Carolina. For South Carolina, Cook went 16-2 that year, with a 1.91 ERA, helping the Gamecocks to the College World Series.

That start, though, was was a slow one when Cook broke his leg in a golf cart accident and was out for the year. He got into just two games for single-A Quad City and 10 innings.

After that slow start, Cook would take off in 1986, hitting AA Midland and AAA Edmonton. In between, he made a five-game stop in Anaheim.

Angels manager Gene Mauch called Cook up directly from Midland, after hardly a half season in the minors.

"He's going to be a big league pitcher some day," Mauch told The Los Angeles Times of Cook's quick call-up. "Why not find out now?"

In those five outings, Cook pitched in nine innings, giving up nine earned runs. He returned to the Angels for another 16 outings in 1987. Going into that year, Mauch spoke highly of Cook.

"How does Cook stand with me? Tall," Mauch told The Times as spring came to a close. Mauch added later, "He probably feels 'Oh, I better be perfect every time out there.' He probably figures he's on trial. That's not exactly accurate, although I haven't told him otherwise."

Cook spent April and May with the big club, but was sent back down in June. He got one start and 15 relief appearances. In 34.1 innings, he gave up 21 earned runs.

"I was very inconsistent - two games good, two games bad," Cook told The Times after being sent down. "You can't expect to stay around pitching like that."

Cook got into just three games for the Angels the next year, then 15 for the Twins in 1989. He stayed with the Twins for 1990, playing at AAA Portland. He then went through the Mariners and Cardinals systems, without getting called back.

Then he went to Puerto Rico after his 1993 season, and was named to the All-Winter League team. He also signed with the Orioles.

"Every report I got this winter said this guy could be a sleeper," Orioles manager Johnny Oates told The Sun in March. "I couldn't wait to see him throw."

Cook got back to the majors Sept. 29 with one inning of work. Two more innings Oct. 3 and Cook's major league career was done. He played one more season, largely with the Mets at AAA Tidewater, and Cook's playing days were done.