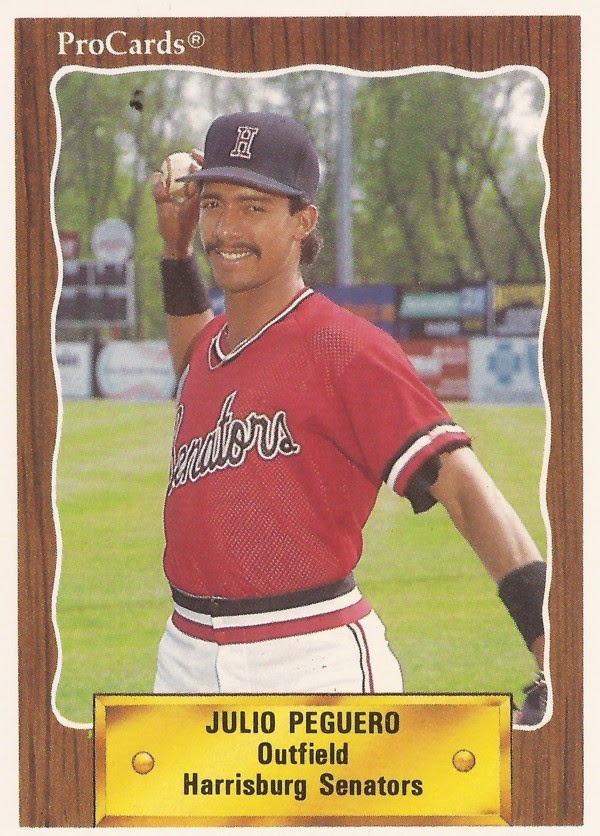 "That kid's going to be a player," Leyland told The Post Gazette after that March 28 game. "He has a quick, short stroke, and he can run."

Peguero's career didn't quite turn out as Leyland had hoped, his future in the organization didn't even turn out like the Pirates front-office had hoped, with a literal clerical error blamed for an early departure.

But Peguero did make the majors, appearing in a grand total of 14 games, not for the Pirates, but for the cross-state Phillies.

Peguero's professional career began in 1986, signed by the Pirates out of his native Dominican Republic. He made AA Harrisburg in 1989, returning to AA for 1990.

He hit .277 for Harrisburg in 1990 and the Pirates were still high on him, and another Pittsburgh prospect Wes Chamberlain. In June, Peguero was described by The Allegheny Times as leading the Harrisburg attack with a .277 average, 22 runs, 51 hits and five triples through

So the Pirates wanted to keep him. But the Phillies got him, and Chamberlain. It was a mistake, an irrevocable mistake. Pirates GM Larry Doughty asked for waivers on both to make room for September call-ups, according to The Pittsburgh Press. He didn't realize he couldn't take the waivers back. Years later, the incident is still brought up as a lesson in waiver rules.

With the Phillies, Peguero made AAA Scranton in 1991. Then, in 1992, Philadelphia. Lenny Dykstra had a broken wrist and the Phillies called on Peguero.

It was a quick call, too. The Phillies needed him that night and he only had a few hours to get there from Scranton. "I go ... five minutes ... meet somebody ... Hilton," a smiling Peguero told the Allentown Morning Call in broken English.

His time with the Phillies was brief, his playing time briefer. He played in 14 games, starting just two. Both his starts were against his old team. He went 2 for 7 with a walk. He scattered just six plate appearances over his other 12 games. And that was it.

Whether his two starts against Pittsburgh were coincidence, given the Pirates' waiver mistake, or not. The Pittsburgh Post-Gazette wasn't biting. The Phillies outfield in that series also included Chamberlain. A Post-Gazette columnist called the outfield of Peguero, Chamberlain and Jim Lindeman "an unearned run waiting to happen."

By July, the Phillies sent Peguero to the Dodgers. Also by July, Peguero's major league career was over.

Peguero held on in the minors through 1996, ending in the Seattle organization. He is also credited with playing in the Mexican League in 2000.

In 2007, he and his wife were in New Mexico, opening a batting cage business, with Peguero offering advice and instruction, according to The Mountain Mail.

His most important piece of advice, according to The Mail, is for batters to be ready for anything.