Induction 2014: Frank Thomas, Speech of Thanks 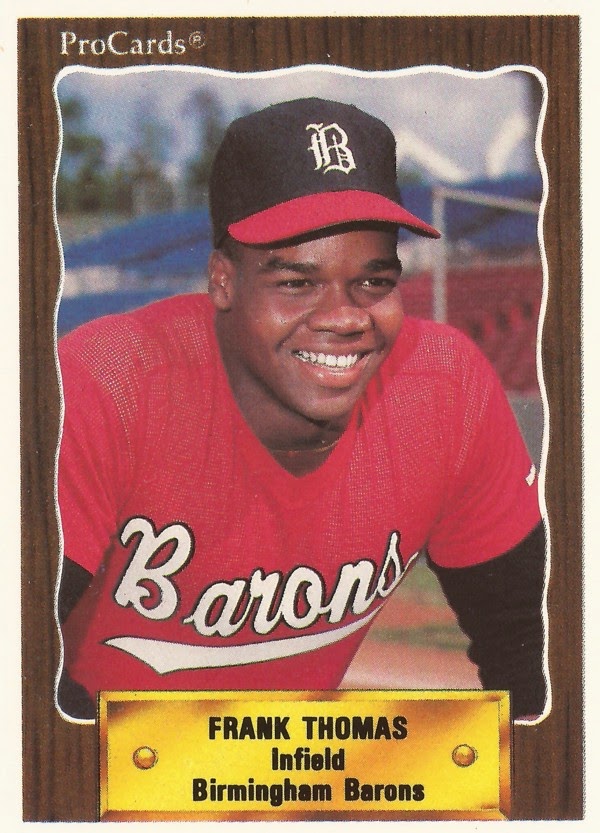 Frank Thomas was emotional - and thankful - from the start. By the time he was nearly done, he explained why.

"I'm sorry," Thomas told a crowd of thousands as he delivered his Hall of Fame induction speech in Cooperstown. "I'm an emotional guy because I wear my heart on my sleeve."

On a beautiful day at the Clark Sports Complex in Cooperstown, NY, Thomas couldn't help but thank anybody and everybody who helped him along on his journey to baseball immortality.

The five-time All-Star and two-time MVP started with his parents, and ended with his teammates. In between, he thanked his wife and children, coaches, managers, general managers, and others.

By the time he was done, Thomas had added another number to his prolific list of career statistics that includes 521 career home runs. He included the number 232. By my count from a Chicago Tribune transcript, that's the number of individuals important to his life and career he named and thanked individually by either formal name or nickname.

It was a speech that was informally introduced by White Sox fans in the crowd who were thanking him, rhythmically chanting multiple times "Thank you Big Hurt."

My wife and I attended Thomas' induction Sunday specifically for Thomas' speech. Thomas is the only player from this project to be enshrined so far in Cooperstown. (Read Thomas' Greatest 21 Days feature: Frank Thomas, Dimension of Power)

He is also the first player who spent any significant time in the minors in 1990 to make the Hall of Fame. Hall of Famer Paul Molitor played a single rehab game in Beloit that year.

Thomas was in his second professional season in 1990, having been taken by the White Sox seventh overall in 1989. He started 1990 at AA Birmingham, where he made the CMC and ProCards sets. By that Aug. 2, he was in Chicago. He never looked back.

Thomas' speech of thanks began with the Hall of Fame and the voters, as well as his fellow Hall of Famers.

"I am so humbled and honored to be a part of this historic class of first-ballot Hall of Famers," Thomas said.
Then he got to the heart of his speech: Those who helped him become the player he was.

First up were his parents, Charlie May Thomas and his late father, Frank Thomas Sr. Thomas thanked them for giving him their love and support to keep him involved in team sports. Both worked hard to instill core values and worked tirelessly for their children, he said.

"Frank Sr., I know you're watching and smiling in heaven," Thomas said. "Without you, I know 100 percent I wouldn't be here in Cooperstown today.

"Thanks for pushing me," Thomas continued after applause, "and always preaching to me you can be someone special if you really work at it. I took that to heart, Pops, and look at us today."

The emotion in Thomas' voice was constant. My wife, who wouldn't be a baseball fan without me, said at that point, "I don't even know this guy and I'm teary eyed."

To his wife Megan, and his five children, Thomas thanked them "for making life so unforgettable for me. ... You guys are my everything. There are no words to describe how much I love you guys."

Thomas' wife came into his life 15 years earlier, "when life was throwing me a curve ball, one that I could not hit. But meeting you really put a pep in my step and made me believe in love again."
There were Thomas' siblings. There was his first agent, the late Robert Fraley and others behind the scenes. There were those in the White Sox organization who gave him a chance, then Ken "Hawk" Harrelson who gave him a nickname.

The Athletics and Blue Jays gave him a chance at the end of his career. He thanked them for that.

His coaches at Auburn instilled a will to win. His first hitting coach with the White Sox, Walt Hriniak, was honest with him from the start.

"You taught me to only want to be the best," Thomas said of Hriniak. "You would always say to me, 'Anyone could be good, Frank. But the special ones want to be great.'"

Thomas' first long list of names consisted of his coaches. He named 25 of them. His trainers and clubhouse managers comprised another 20 names.

He named five doctors, with a special thanks to Dr, Richard Ferkel. Thomas recalled sitting on 452 home runs with a fracture many thought should have ended his career. But Ferkel repaired it.
Then there were his teammates. Wins need teammates, Thomas said, "and I had the best of them."

By his count, Thomas had 850 teammates in his career. He proceeded to name 138 of them in a rapid-fire list of last names and nicknames. "I know it's long, I'm sorry," Thomas said, coming up for air between Politte and Jenks.

"Yeah, it was real," Thomas said after the longest list of names. "You guys are my family away from home. I miss all of you, I’m glad to have known all of you. I'm sorry I couldn't name the rest of you guys."

Thomas saved his last thanks for the city of Chicago, drawing loud applause from the crowd.

"You guys make the Big Hurt who he was in the greatest sport town in America," Thomas said. "I know I'm biased, but I thoroughly enjoyed every moment playing for you all. I thank you from the bottom of my heart."

He closed with a message to young ballplayers, the kids: "Just remember one thing from today. There are no shortcuts to success. Hard work, dedication, commitment. Stay true to who you are."

"God bless you all," Thomas concluded, "and I thank you."