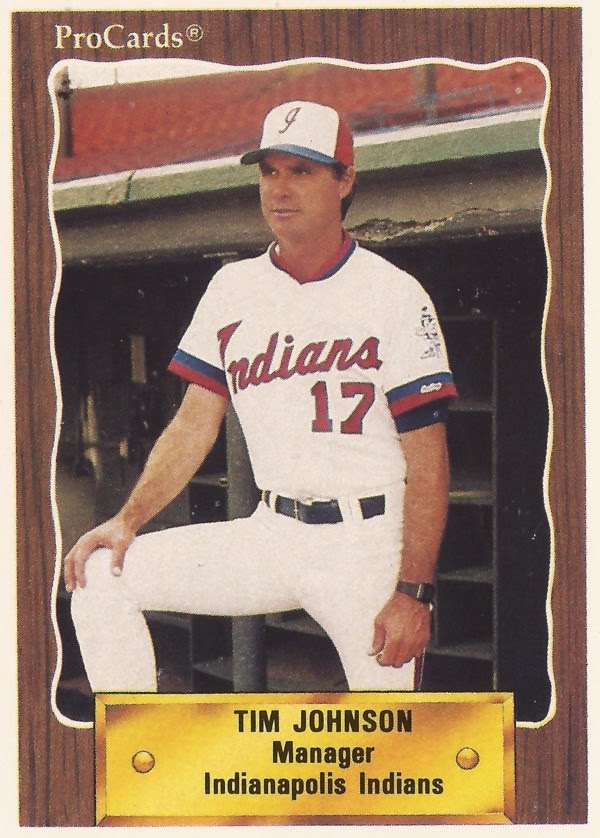 Meeting with his players in late May 1990, Indianapolis Indians manager Tim Johnson tried to get them to relax. Everyone took the game too seriously sometimes, he told them, according to the book The 26th Man, pitcher Steve Fireovid's diary account of the 1990 Indianapolis season.

Baseball players put too much pressure on themselves, Johnson told his players, according to the account published in 1996.

"Pressure was in Vietnam," Johnson told his players in part of his speech, "where my life depended on the man next to me. Baseball's not as important as we make it out to be. ... This is just a game, and it's the greatest game in the world, so have fun playing it. If we can't have fun, what's the sense of being here?"

The speech Fireovid wrote in his diary entry was exactly what the players needed to hear they won that night 4-2, a rarity in a down season. It worked, Fireovid wrote, because it focused the team on a proper perspective, rather than burying them with problems they already knew they had.

But there was a problem with the speech, a problem that wasn't fully known until late 1998 after Johnson's managing career progressed to the point where he became a manager in the major leagues, with the Toronto Blue Jays.

Johnson frequently used stories about his service in Vietnam in an attempt to inspire his players. He did so with Indianapolis and he did the same as manager for the Blue Jays.

The problem was, Johnson never served in Vietnam. He served in the Marine Corps reserves, teaching troops going to Vietnam. But he never fought in the war, according to press accounts.

Exposed, Johnson faced the media that December. He felt guilt, he told the reporters, that he was playing baseball while others fought and died.

"It was a tremendous weight off my shoulders," Johnson told reporters. "We've all done things in life that we wish we didn't.

"The toughest part is over," Johnson was quoted as saying. "Now, it's going on with life and trying to have a good season. Credibility to me is going out there and having players play hard for me. I know they will."

But Johnson would never have major league players play for him again. The Blue Jays fired him before spring training was out. He's also so far not returned to affiliated baseball, continuing work but with independent teams.

Johnson's managing career began after spending parts of seven seasons in the majors from 1973 to 1979, mostly with Milwaukee but with some time in Toronto. That was after spending 1968 to 1972 in the minors with the Dodgers system, never playing fewer than 92 games.

His playing career finished, Johnson got his first managing job in rookie league Great Falls, with the Dodgers. He made single-A Bakersfield in 1989, then jumped to the Montreal system and AAA Indianapolis in 1990.

It was there that Fireovid portrayed his manager as fiery, but caring of his players. In the down season, one where the Indians finished 61-85, Johnson twice went on tirades in the clubhouse, according to Fireovid's account. Once, about a week before the Vietnam speech, Johnson yelled at his players for playing bad baseball. He also grabbed a platter of french fries and threw them.

Then, after a bad early July loss, Johnson called his team an embarrassment. "I'm not going to put up with this anymore!" he yelled, according to Fireovid's account. He then threw a laundry cart against the wall.

After Indianapolis, Johnson went on to become a bench coach with the Expos in Montreal and then with the Red Sox. In 1997, he led the Iowa Cubs to a division win. Then the Blue Jays called.

"The key here is that he's going to connect and communicate with his players,'' Toronto General Manager Gord Ash told reporters of the managerial selection.

With the Blue Jays in 1998, Johnson led the team to a 88-74 record and a third place finish. But Johnson couldn't overcome the revelations about Vietnam.

By spring training, the questions still dogged him. It became too much of a distraction for the Blue Jays, according to The New York Times. There were also allegations that me made up being offered a basketball scholarship from UCLA, The Times wrote.

''I think he tried to get things settled,'' the GM Ash told The Times after Johnson was terminated, ''but there continued to be an unsettled feeling in camp, a distracted feeling that interfered with players getting the job done on the field. My intuition told me if not now, it would happen 30 or 45 days from now. I couldn't risk the season.''

Johnson soon returned to baseball, but in the Mexican League. He was credited with managing there for four seasons, then returning stateside to manage in the independent Northern League. This past season, Johnson managed in Tucson, of the independent Golden Baseball League.

But in 2003, Johnson was interviewed by The Kansas City Star, as manager of the Northern League's Lincoln Salt Dogs. It was a long way from his summer in Toronto.