The Greatest 21 Days caught up with Mark Bailey in August 2011, read the interview: Mark Bailey, Blocked It 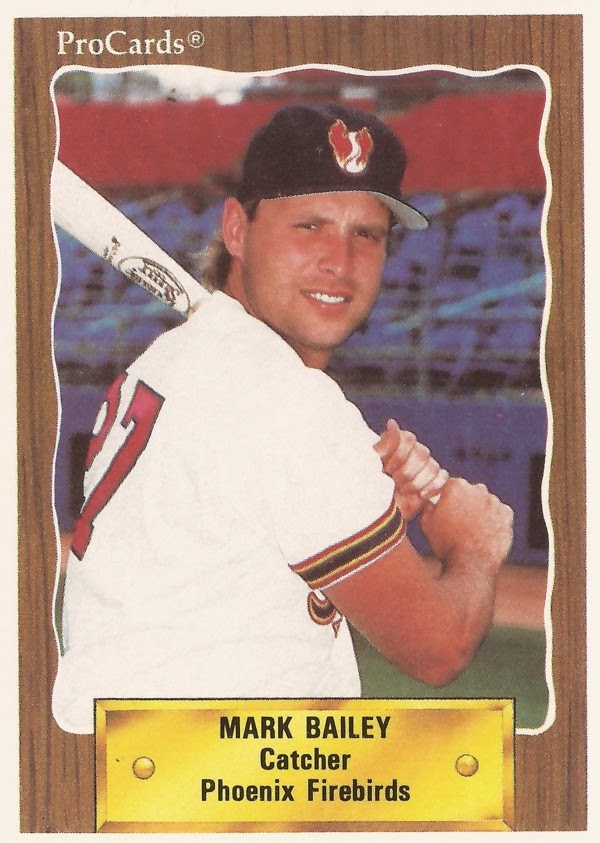 Starting his third professional season in 1984, Mark Bailey made AA Columbus out of spring training. That was after two years spent at single-A.

By the time April 1984 was out, though, the young catcher was in Houston, smacking two singles and scoring two runs in his first big league start, The Associated Press wrote.

"I was okay once I worked up a sweat," Bailey told The AP. "I tried to stay calm."

Bailey tried to stay calm then, and for the rest of the season, getting into 108 games for the Astros that year. He would go on to stay calm in parts of seven major league seasons, his last big league playing time coming in 1992.

Bailey's professional career began in 1982, taken by the Astros in the sixth round out of Missouri State University.

Bailey played that first year at short-season Auburn, hitting .300. He moved to single-A Asheville for 1983, then AA Columbus to start 1984. Bailey only played 17 games at Columbus.

Bailey ended up hitting .212, with nine home runs in 1984. Bailey had a walk-off home run in a July game against the Mets. A month earlier, he hit two in one game.

"I got a couple of good pitches to hit and this is a good park to hit in," Bailey told The AP after his two-home run performance at Atlanta. "I've been struggling, but I just happened to get a couple of home runs. It's a lot of fun. Every little bit helps."

Bailey returned to Houston for 1985, getting into another 114 games. His average improved, as well, to .265, and he hit another 10 home runs. It was the height of his major league playing time.

In 1986, Bailey managed to get into just 57 games, a shoulder injury and poor play limiting his playing time, according to The Orlando Sentinel. A frustrated Bailey also hit just .176.

"I got so messed up in the head. I tried hours and hours of batting practice," Bailey told The Sentinel the next spring of his 1986 season. "Either I was so timid I was almost looking for a walk, or I was taking little bitty hacks at the ball. It was ridiculous. I was spinning my wheels at the time."

Bailey's big league time would dwindle again in 1987, to 35 games. In 1988, he got into just eight. After spending time in the Expos and Mets systems, Bailey returned to the majors with the Giants in 1990, for five games. His final 13 big league outings came two years later, in 1992.

Bailey's playing career finally ended in 1995, playing out the season with independent Abilene.

Bailey has gone on to be a coach in the minors, and the majors. From 2002 to 2009, Bailey served as the Astros' bullpen coach and first base coach, after several years coaching in the minors. Bailey returned to the minors, at AA Corpus Christi, in 2010.

For 2011, Bailey moved to short-season Tri-City in Troy, NY, serving as hitting coach there.

In 2009, serving as the Astros' bullpen coach, the former catcher talked up another catcher, young Astros prospect Jason Castro. Castro made the majors in 2010.

"We'll see how he stacks up against major league talent," Bailey told The AP of Castro. "I think with the talent that he has, it will be a smooth transition. From everything I've seen so far, he looks like a major league catcher in waiting."