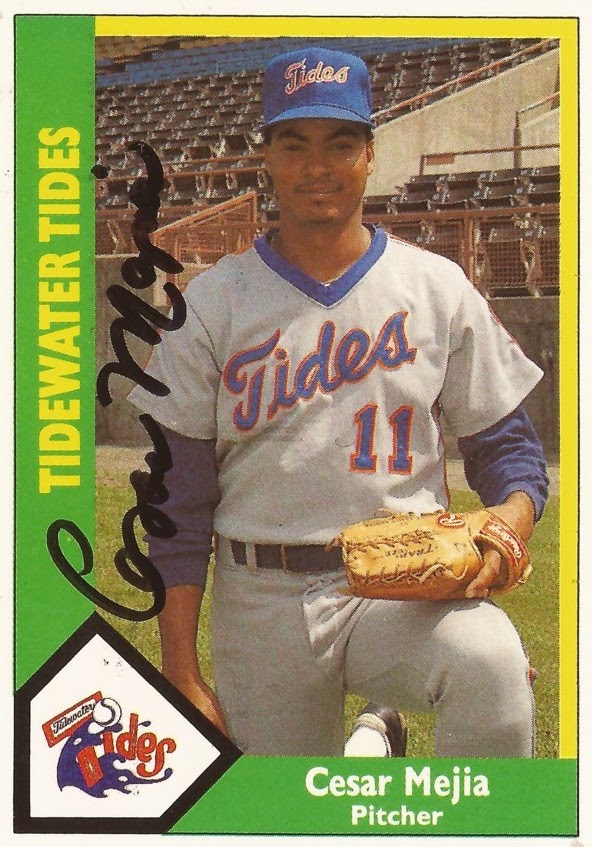 When young Dominican pitchers got to the academy, Cesar Mejia recalled, some think they already know how to pitch.

It was one of Mejia's jobs to actually teach them.

"It's really hard to deal with that philosophy," Mejia told The Greatest 21 Days recently. "They believe the only way they come to this country is by throwing hard and that's wrong. That's real wrong."

Mejia spent more than 15 years teaching young Dominican hurlers the right way to pitch, helping to send them on to play in the United States for the Philadelphia Phillies organization.

A number of the pitchers Mejia worked with made it to the major leagues. Mejia's work with the Phillies also earned him two championship rings, including one for Philadelphia's 2008 World Series win.

Mejia helped those players start their path to the majors, a place he never got himself. A former pitcher, Mejia arrived in the United States from the Dominican Republic and played six seasons as a pro. He never made the majors.
Mejia spoke with The Greatest 21 Days before a recent return to East Field and Glens Falls, NY. Mejia returned to throw out the first pitch for a Golden Eagles collegiate league game at the place where he had his best season as a pro.

Mejia's playing career took him to the United States, Taiwan and finally Mexico. Slowed by injury, Mejia never made the majors.

He's since gone on to his career as an instructor for the Phillies. More recently, he's taken time off from instructing to write a book and promote a new device he created called the MP Balancer that he designed to improve pitching mechanics.

Mejia's playing career in the United States ended with two seasons partially spent at AAA for the Orioles and the Mets. His season with the Orioles came after his break-through season in Glens Falls.

He arrived with the unfamiliar team after a trade. He also arrived that spring in 1989 with an elbow he'd injured pitching that winter in the Dominican. He thought he could work through it, he recalled, and he kept it a secret from his new team. But his performance on the field suffered.

His confidence also suffered. He recalled getting off to a slow start at Rochester and then getting sent down to AA Hagerstown. He'd been put on the Orioles' 40-man roster. He eventually was taken off it

"Confidence plays a big part in this game," Mejia said. "If you don't have confidence, it's 100 percent that you have some trouble on the mound."

Mejia moved to the Mets for 1990, but his arm problems lingered. He finished up his minor league career at AAA Tidewater.

He pitched well there, but didn't get any run support, he recalled. He lost eight of the nine games he pitched, while his team scored him all of six runs, he said.
"I was really happy with the club in Taiwan," Mejia said. "In Taiwan, it don't matter how good you pitch, if you don't win games, you're going to be in trouble."

Mejia finally finished out his career in 1995, playing for Campeche. Soon, he caught on with the Phillies as an instructor in his home country.

The pitchers he worked with there were the same kind of pitchers Mejia was just over a decade earlier, wanting to get to the United States to play pro ball.

"They forget do on the field what they need to do to get to the states," Mejia said.

But he worked with them. He counted a long list of players he worked with in the Dominican Republic who eventually made it to the majors, including Antonio Bastardo, Alfredo Simon, and Robinson Tejada.

Mejia continued with the Phillies into 2011. In the meantime, Mejia got a 2008 Phillies World Series Championship ring and a 2009 National League Championship ring as a member of the organization. Mejia, who also did some work in spring training, recalled getting to work with some of the pitchers on those teams, something he's proud of.
He's since worked to develop the MP Balancer, a pitching aid he created. The balancer is designed to teach proper throwing mechanics, Mejia said, by guiding the pitcher's lead foot in the right direction.

He designed his device to help with both, he said. The MP Balancer is coming to market soon, along with a smart phone app. It will be sold from his Web site, MyNextLevelCoach.com. Mejia has also written a book called "The Art of Pitching" coming out soon on Amazon.

With the Phillies, Mejia recalled having to understand that he wasn't pitching anymore himself. As an instructor, he had a number of different personalities to deal with. Each pitcher had his own.

His work was to correct the pitchers' mechanics and behaviors and help them succeed.

"When I started to understand those little things, it was really easy for me," he said.

In spring training, Mejia got the chance to coach at different levels, though he wanted to stay in the Dominican Republic full-time.