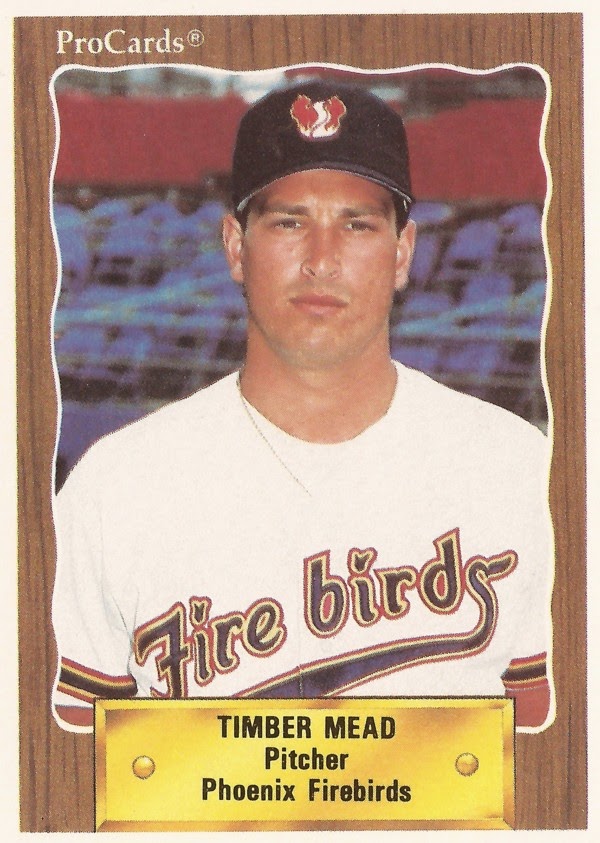 Timber Mead was going into his third professional season in 1987 when his team, the Giants traded him to the Reds.

The main players in the deal were others, Eddie Milner to the Giants and Frank Williams to the Reds. Mead and fellow former Giant Mike Villa were sent along to even the deal.

"We got two good prospects," Reds GM Bill Bergesch told The Associated Press after the January 1987 deal was complete. "and another good man for our pitching staff."

Williams went on to pitch two seasons for the Reds, Milner played one for the Giants. Mead and his fellow prospect, never lived up to that prospect status, never making the majors.

Mead was selected by the Giants in the sixth round of the 1985 draft. He spent that season at short-season Everett, going 7-5 with a 4.58 ERA.

With Everett that June, Mead one-hit Spokane for the first five innings, but Everett eventually lost. For 1986, he moved on to single-A Clinton, lowering his ERA to 3.57 and posting a record of 9-6. Then the Giants shipped him to the Reds.

Mead played 1987, his first year with the Reds, at single-A Tampa. He went 5-7 with a 5.00 ERA. One of his losses came in an August game against Daytona Beach, walking in a run. It was a loss that was perhaps understandable, given the circumstances.

In July 1988, Mead pitched 6.2 innings, giving up four hits and walking one, according to The Orlando Sentinel.

Along the way, he was named Southern League Player of the Week in April 1989. The Los Angeles Times also noted Mead's name, "a big league name." He went 2-0 that week, going 13 innings and giving up just one run, The Sentinel wrote.

Despite his poor record in 1989, Mead did have success against one team, Birmingham. He shut them out 2-0 that summer, The Sentinel wrote. The Sentinel also noted Mead's first name, "a major-league first name." Mead was the only pitcher to shut Birmingham out by late July.

Mead returned to the Giants system for 1990, dividing it between AAA Phoenix and AA Shreveport, with a short stint at high-A San Jose. He started at AAA, had his stint at San Jose then ended at AA Shreveport.

Used mainly as a reliever, Mead posted an ERA at AAA of 5.23. It was his final year in affiliated ball. He returned for 1991, going 13-7 as a starter for independent Reno, ending his career.

Meads loss in that August 1987 game might have been understandable. He was probably distracted. He became a father days later, with son Tyler Mead born.

Tyler Mead would go on to a brief baseball career of his own, selected by the Padres in the 17th round of the 2006 draft. Tyler Mead's career has been briefer than his fathers. He played three seasons in the San Diego system, getting to short-season Eugene.