Randy McCament, All the Confidence - 8 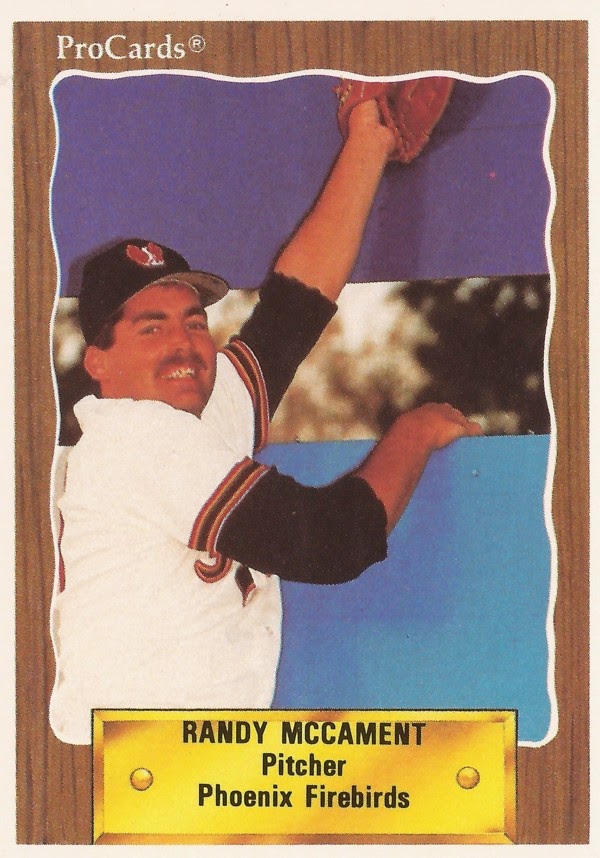 Randy McCament hadn't won in more than a month in 1985, but it wasn't for lack of good outings.

But he saved his best outing - a complete game with two earned runs - for when it was needed most: The Northwest League championship game, The Eugene Register-Guard wrote. He was even carried off the field in celebration for his efforts.

"I had all the confidence in the world in him," Everett Manager Alan Marr told The Register-Guard. "The paper said he lost his last three starts, but it failed to mention he lost 'em by three unearned runs."

It was McCament's only year as a starter. Moved to relieve the next year, though, McCament began his steady climb to the majors. McCament made San Francisco in 1989, got into 25 ball games that year and three the next, marking the extent of his big league career.

McCament's career began that year in 1985, selected by the Giants in the 15 round of the draft out of Grand Canyon University. That first year at Everett, as a starter, McCament went 7-3, with a 2.90 ERA in 14 starts.

The next year, as a reliever, McCament played largely at single-A Fresno, posting an ERA of 2.49. He also moved to the closer role, saving 19 contests. His 10th save came in early June, a 1-2-3 outing against Modesto.

McCament's efforts at Fresno earned him eight games at AA Shreveport, where he gave up six earned runs in 19.1 innings of work and picked up two more saves.

His loss came in his next outing, July 20 against the Cubs. In the 11th inning, McCament gave up the winning hit to a pinch-hitting pitcher, Les Lancaster, a hit that was later credited as a turning point in the Cubs' season. He gave up a three-run home run to Andre Dawson in a July 23 game.

Arguably his worst outing came Aug. 7, giving up three earned runs in a third of an inning against the Reds.

McCament played the rest of the year at AAA Phoenix. In 1991, he moved to the Padres system at AAA Las Vegas. He returned to the Giants system in 1992, his final year as a professional, dividing 17 games between high-A San Jose and AA Shreveport, ending his career.