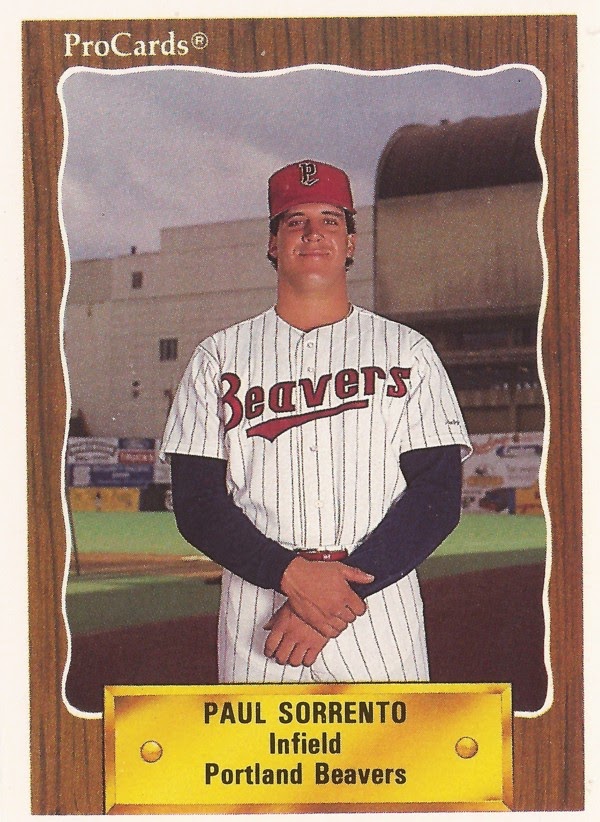 Paul Sorrento's Indians were already up 2-1. By the time his at bat was over, the lead was 6-1.

Batting against the Royals' Tom Gordon in June 1993 with the bases loaded, Sorrento hit a 2-0 pitch for a grand slam to right, The Associated Press wrote.

"Obviously, in that situation, you're looking for a pitch in the zone you can handle," Sorrento told The AP. "For me, that's the middle part of the plate and in. He just got a pitch up in the zone where I'm looking for it."

The grand slam was the first of Sorrento's career. Before his career was out in 1999, he would hit eight more.

Sorrento's career began in 1986, drafted by the Angels in the fourth round out of Florida State. He started at single-A, stayed there through 1988.

Traded to the Twins, Sorrento spent most of 1989 at AA Orlando. By September, he was in Minnesota. He played 14 games for the Twins that September, going 5 for 21.

On his trip to the bigs in 1990, Twins Manager Tom Kelly had good things to say about Sorrento, after a Sorrento pinch-hit home run in September. "He's a big, strong kid who hit a lot of home runs in the minors," Kelly told reporters afterward.

Sorrento played first base, a position the Twins already had filled in Kent Hrbek, The AP wrote. But in July 1991, Sorrento still made his mark. He hit another pinch-hit home run, this one a three-run job, to help the Twins to a 7-3 win.

"It feels really good to contribute when the team is playing well," Sorrento told The AP after the game, while also crediting teammate Mike Pagliarulo. He went 0 for 2 that year in the World Series.

Another trade for 1992 and Sorrento was with the Indians. He was also in the majors to stay. Sorrento played 140 games for Cleveland that year, hitting .269 with 18 home runs.

He stayed with the Indians through 1995. He hit .280 in 1994 and his bat also got hot with a stretch of five home runs in five games. Sorrento's bat also made headlines elsewhere. It showed up in the umpire's clubhouse as a stand-in for Albert Belle's corked bat.

"I guess we'll have to call Judge Wapner," Sorrento told reporters of the bat incident. "At least my bat will be remembered for something."

It was that last campaign that convinced the Mariners to sign Sorrento. Seattle was looking for a cheaper replacement for Tino Martinez. And he got off to a hot start. By late June, he was hitting .324 with 13 home runs. The Mariners tried to make him not pull the ball so much, The Tacoma News Tribune wrote.

"I picked up what they were asking me to do quickly, because it's what I did when I first got to the big leagues in Minnesota," Sorrento told The News Tribune. "In Cleveland two years ago, they made me more of a pull hitter, and last season I kind of carried it to the extreme."

Sorrento stayed with Seattle for two seasons, hitting 23 home runs in his first campaign and 31 in his second. The Florida State product then finished out his career with two seasons with Tampa Bay.

He hit 11 home runs in his final season. One of those came off Boston's John Wasdin in an early July game.

"He just happened to put a pitch out over the plate, a fastball, and it just hit the good part of the bat," Sorrento told The Hartford Courant afterward. "It was a good win for us."