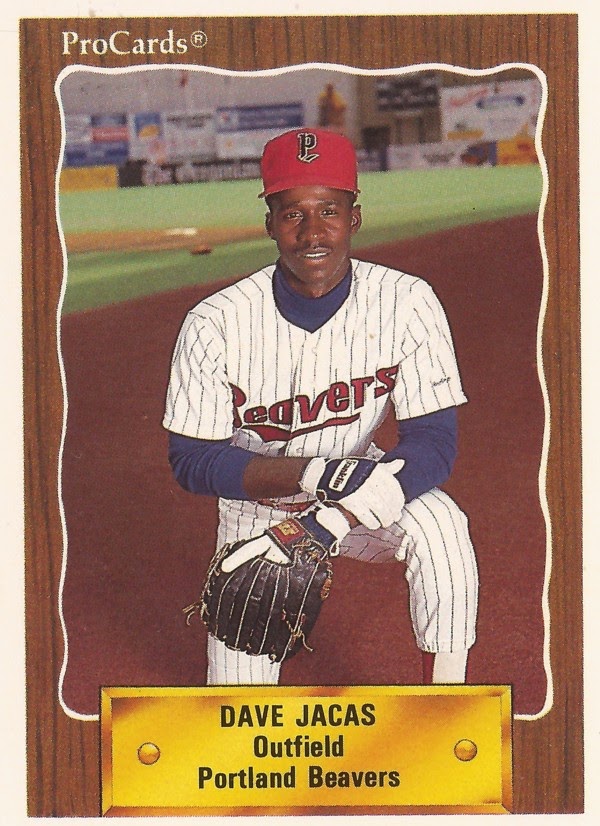 By June 1991, the El Paso Diablos were about as hot as their name would imply. At their new park, they scored 7.6 runs per game and were 26-5, The Los Angeles Times wrote.

Helping them along was outfielder Dave Jacas, who in the off-season worked as an accountant. As a player, though, he would finish the year with 53 RBIs and 27 stolen bases.

"It's a real dynamic bunch," Jacas told The Times of his team's efforts. "But I can't explain it."

Jacas was in his sixth season as a professional, playing for the Brewers' AA El Paso team. He'd played the previous year at AAA in the Twins' system. But Jacas only had one more season left as a pro, his career ending after 1992, short of the majors.

Jacas' professional career began in 1986, taken by the Twins in the 14th round of the draft out of the University of San Diego. At San Diego that year, Jacas helped his team in March, going 3-5 in one game, with a stolen base that helped him score the winning run. He went 3-4 in another game. The previous summer, Jacas played in Alaska.

With the Twins, Jacas started at single-A Kenosha, hitting .275 and stealing 10 bases. He split 1987 between Kenosha and single-A Visalia, hitting .253 between them.

Jacas didn't get his first look at AA until 1989, at Orlando. He started the year at Visalia, filling in for the trainer with laundry duty, The Times wrote. Jacas also hit .307 at Visalia, getting called up to Orlando in June.

Promoted to AAA Portland for 1990, Jacas hit just .231. It was his final season in the Twins organization. He finished out his career with one season in the Brewers system in 1991 and one more with the Athletics system in 1992, both seasons spent at AA.