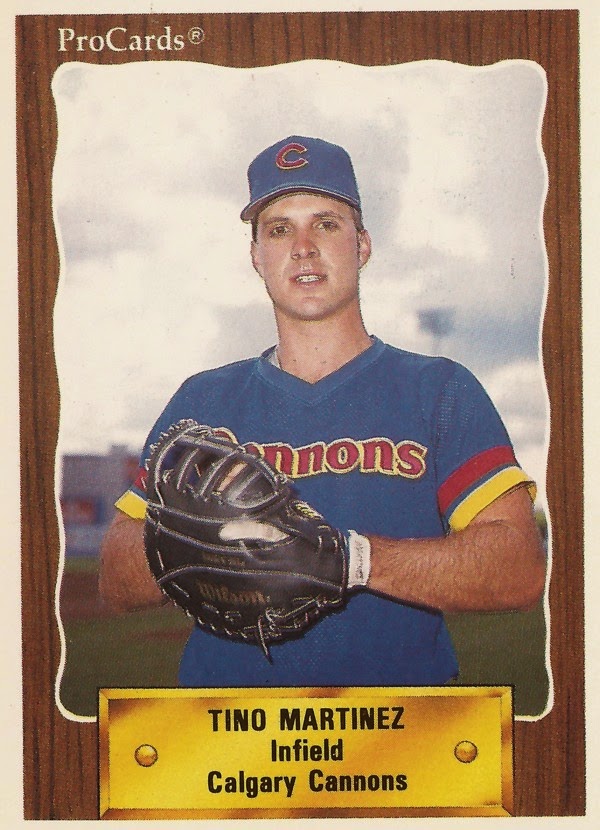 The Mariners already had two veteran first basemen in 1990, the St. Petersburg Times wrote. But, in late August, they wanted to look at a young one, Tino Martinez.

"It's one of those problems organizations like to have," Mariners manager Jim Lefebvre told Martinez' hometown Times. "We just feel Tino will be a quality player in the big leagues."

It was Martinez' first look at the majors in a career that would indeed turn out to be a quality one. Martinez would first help the Mariners to their first ALCS birth in 1995, then go on to anchor four World Series championship teams with the Yankees, all in a career that spanned 16 seasons.

It was a career that began in 1988, taken by the Mariners in the first round of the draft out of the University of Tampa. His minor league career was brief. He started at AA Williamsport in 1989 then played much of 1990 and 1991 at AAA Calgary, getting brief call-ups to Seattle both years.

He was in Seattle for good by 1992, hitting .257 with 16 home runs. By 1995, Martinez had increased his home run numbers to 31 and his average to .293, helping his Mariners to the division championship and to the ALCS.

It was Martinez' two-run home run and RBI single that helped get the Mariners off the mat in Game 3 of the ALDS against the Yankees at the Kingdome.

"I think this win gives us a lot of confidence," Martinez told reporters afterward. "We like to think now that the Yankees have their work cut out to win one game here."

The Mariners were down two games to none, a series the Mariners came back to win. The Yankees must have liked what they saw, in Martinez at least. By December, he was one of them, replacing Yankee great Don Mattingly.

With the Yankees, Martinez continued the hitting pace he'd set the year before. He hit 25 home runs with a .293 average. He also helped the Yankees past the first round of the playoffs and to a World Series title.

In 1997, he was out of the gate fast. In the second game of the year, Martinez hit three home runs in his first three at-bats. Afterward, he tried not to think of himself as a home run hitter, he told The New York Times.

''When I take batting practice on Friday, all I'm doing is hitting line drives to left,'' Martinez told The Times in a year where he hit a career-high 44. ''I have to forget about this as soon as possible.''

The Yankees and Martinez returned to the World Series in 1998. Martinez' bat didn't get going in the playoffs until after the ALCS. He'd even hears some boos, that is until Game 1 of the World Series and his game-cementing grand slam.

"I was struggling in the ALCS, but no one likes to get booed when you've busted your butt all season to get here," Martinez told reporters afterward. "I know I haven't been doing much, but that eventually I'd come up in a big spot and get a big hit to help the team win. It's a big relief."

Martinez helped the Yankees to a title that year and the next two years. After 2001, the Yankees moved on and Martinez moved on, to the Cardinals. He played two seasons there, then a season in his home in Tampa Bay.

Then it was back to the Yankees for one more year, the aging Martinez getting hitting lessons from the Yankee he originally replaced.

''When you get a guy rolling, confidence comes,'' Mattingly told The Times of his work with Martinez. ''All of a sudden, he feels good and starts to think he can do anything with his body.''
Martinez told The Times he had that confidence. ''I feel like I'm the same player I was when I was in New York in the past.''