Roger Smithberg, Any Other Game - 124 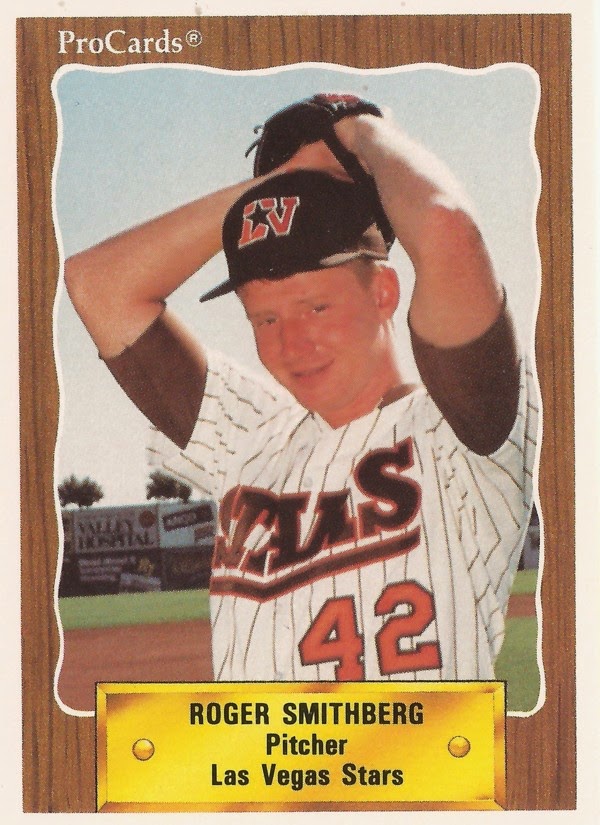 Coming in for his major league debut in September 1993, Roger Smithberg settled in. He went three innings, giving up just two hits, all against the eventual repeat champions, the Blue Jays.

"It was just like any other game," Smithberg told The Associated Press afterward, "until later when one of the guys said I had just pitched against probably three future Hall of Famers. Then I got nervous."

Those future Hall of Famers - and there were three in the Blue Jays lineup - went 0-for-4 against the young right-hander.

Smithberg, however, would get only 14 more chances to face future Hall of Famers, or major league hitters for that matter. His big league career would end by July 1994 with a total of 15 appearances and 22 innings pitched.

Smithberg's professional career began in 1987, taken by the Padres in the second round of the draft out of Bradley University.

For 1990, Smithberg was someone the Padres were watching.

"We really think a lot of him," Padre director of player development Tom Romenesko told The Los Angeles Times that April. "We felt enough for him last year that we moved him from Riverside to triple A, and he held his own."

Smithberg split 1990 between Las Vegas and high-A Riverside, pitching 79 innings between them. Part of that limited workload was a strained ligament in an elbow, according to The Chicago Tribune. It was the Padres goal to get him healthy for 1991.

"He's a big, strong kid with a good arm. He's a second-round pick and obviously, we've got money invested in him," Padres minor league director Ed Lynch told The Tribune. "He's 6-foot-3 and 195 (pounds). We want to make sure he is ready to give us a year that will get him to the big leagues."

But Smithberg wouldn't make the big leagues for nearly three more seasons, until September 1993, but not with the Padres, with the Athletics. Smithberg was released by the Padres at the start of the 1992 season, signing with Oakland later that year.

Smithberg made the majors early that September, soon making his debut against the Blue Jays and their three Hall of Famers.

On Sept. 20, Smithberg finished out a Todd Van Poppel 2-1 win. He came in with fans wanting Van Poppel to finish it himself, The AP wrote.

"I heard the boos," Smithberg told The AP. "I knew they wanted Todd to finish it. I was just glad I was able to end it with us still ahead."

Smithberg pitched two more games for Oakland in 1994, giving up four earned runs in 2.1 innings, ending his major league career by July. His professional career ended that year, playing out the season back at AAA Tacoma.