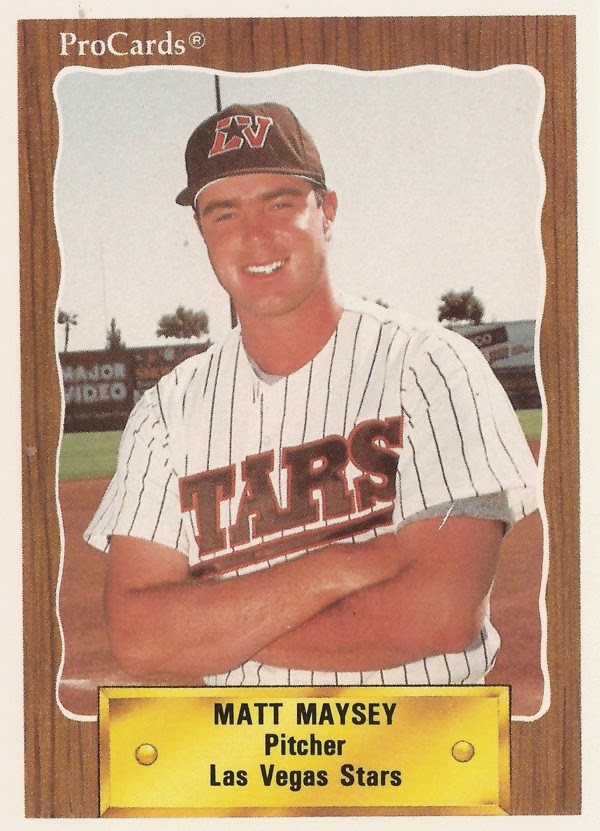 Matt Maysey achieved two milestones in that August 1993 game. One milestone was expected for the pitcher. The other wasn't. One, though, set up the other.

"People are making a big deal out of my first hit, but, hey, I also got my first win," Maysey told reporters afterward. "I haven't heard a darn thing about that."

Maybe it was because the reliever Maysey got that hit, which set up the game-winning, 13th-inning home run, as a member of the American League's Milwaukee Brewers. It was only the second hit by an American League pitcher in nearly 20 years, The Philadelphia Inquirer wrote.

Maysey's road to that win began in 1985, taken by the Padres in the seventh round of the draft out of Hastings High School in Houston.

Maysey started at short-season Spokane, going 0-3 in seven outings. Maysey's arm, described in The Spokane Chronicle as weakened, limited his outings later in the year.

Maysey moved to single-A Charleston in 1986, staying there for 1987. In his second year there, Maysey went 14-11 as both a starter and a reliever. Maysey was called a relief specialist in June and one of the league's top pitchers in August.

Released by the Padres going into 1991, Maysey signed with the Expos. He played the year between AA Harrisburg and AAA Indianapolis.

In July 1992, after a Moises Alou injury opened a roster spot, Maysey got his first call to the majors. He got into two games, giving up one earned run in 2.1 innings of work.

Maysey signed for 1993 with the Brewers. He then injured his knee early in spring training - in batting practice. He then debuted in the regular season in July, getting into a total of 23 games on the season.

In early September, his first hit and win under his belt, Maysey got his first and only major league save. He finished out the year with a 5.73 ERA in 22 innings of work. Maysey didn't return to the majors.

Maysey, though, continued to pitch through 1996, moving to the Pittsburgh system for 1993 at AAA Buffalo. He stayed with Pittsburgh for 1995. He then moved to Aberdeen and Dakota of the independent Prairie League, ending his career.