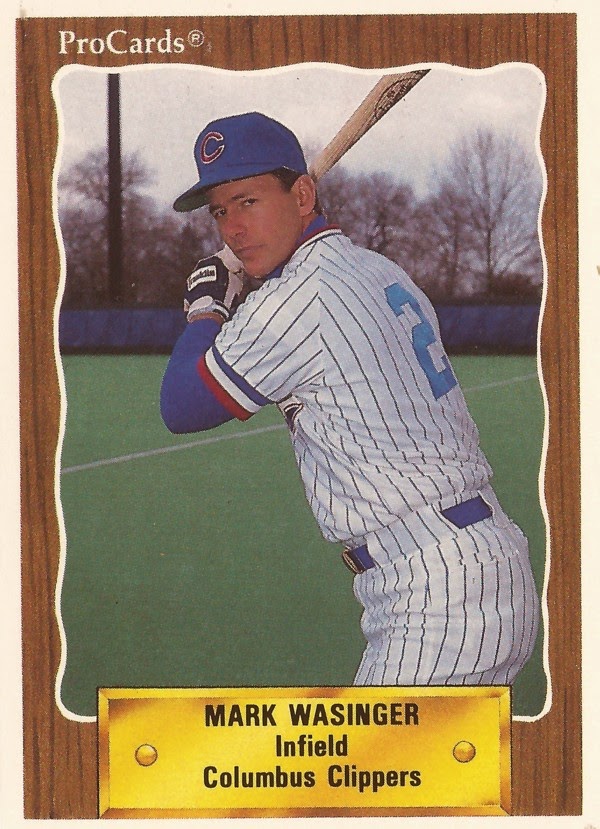 Mark Wasinger's first major league hit - a home run - was just the start of his day in that May 9, 1987 contest.

The Giants' third baseman went on to get three more hits in the game - all three of them doubles - for a total of four hits on the day. He also scored two more runs.

"I never had four extra-base hits in a game before," Wasinger told The Associated Press after the game. "They just happened to fall in."

Wasinger went on to get into 44 games for the Giants in 1987, getting 22 total hits for a .275 average. He would play in just one more major league season. Those 22 hits would prove to be the only 22 hits Wasinger got in his career.

Wasinger's professional career began in 1982, taken by the Padres in the third round of the draft, out of Old Dominion University. At Old Dominion that season, Wasinger made The Sporting News All-American team.

Wasinger started at single-A Reno, hitting .318. He returned to Reno for 1983, then moved to AA Beaumont in 1984. He made AAA Las Vegas in 1986. Through his first five seasons, Wasinger never hit worse than .285 and hit under .300 just that once, his first year at Beaumont.

It was early in 1986 that Wasinger debuted with the Padres, on May 27. Wasinger got into three games before returning to Las Vegas. He got eight at bats, but didn't get a hit. In one of his games, a Wasinger error allowed a run to score.

Wasinger returned to Las Vegas to start 1987, but was traded by the end of April to the Giants in a four-player deal. He was in San Francisco by May 7 and stayed through the end of July. He then finished the season as a September call-up.

Of his 22 hits that year, that home run ended up being his only home run. Those three doubles he got in that game, his only three doubles in the majors.

He returned to San Francisco for just three more games, his last coming April 21. Wasinger returned to AAA and by July, he was released. He finished the year with the Indians at AAA Colorado Springs.

For 1989, Wasinger signed with the Yankees, playing at AAA Columbus. In mid-April, Wasinger picked up two hits in a game, knocked in two runs and scored twice.

"I'm just happy to be playing," Wasinger told The Newport News Daily Press. "It's tough to be productive off the bench, as any guy who comes off the bench will tell you."

By the end of that month, Wasinger was also about to be inducted into his old university's sports Hall of Fame. To The Daily Press, on the occasion of his induction, Wasinger cited that playing time as his way back to the majors.

"All I need is playing time," Wasinger told The Daily Press. "If I get that, I'll be back in the majors, and this time for good."

Wasinger, though, never got back. He played into 1993, moving to the Angels system in 1991. By 1997, Wasinger had started his post-playing career in the game, serving as hitting coach for rookie-league Idaho Falls.

He also served as a scout for the Padres. In 1999, as a Padres scout, Wasinger spotted a young high school pitcher in Mobile, Ala. It was future Padre Jake Peavy. Wasinger talked the 15th rounder out of college to sign with San Diego.

"He did not want to get beat, but he took positive action to win instead of just hoping that things would happen," Wasinger told MLB.com in 2007. "He made it happen. You could see it was in his nature for him to do that. That was special."

More recently, Wasinger has served as special assignment scout for the Red Sox.