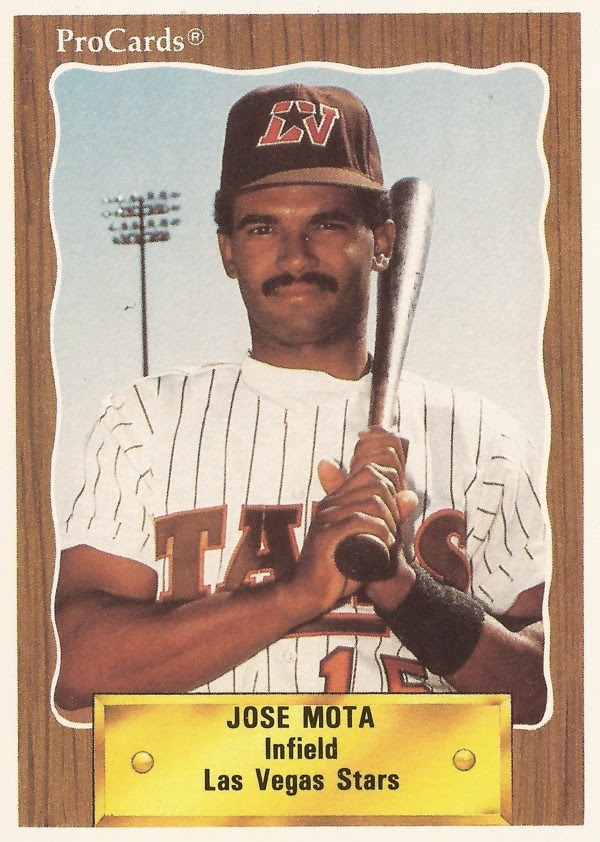 Dennis Rasmussen met Jose Mota on a rehabilitation assignment to AAA Las Vegas. They met again in the majors, Jose Mota called up in May 1991 as the Padres' newest second baseman, The Los Angeles Times wrote.

Mota's new friend took him under his wing, Mota told The Times.

"When I came here, he said, 'Jose, I saw you play in Las Vegas. Don't change,' " Mota told The Times. " 'I was there with you for four weeks. Don't think this game has to change when you come up here.' "

While Mota took Rasmussen's advice, his stay in the majors was a brief one. He played 17 games for the Padres that year, then two more five seasons later with the Royals, marking the extent of his major league career.

Mota's career in baseball, though, has continued, in the announcing booth of the Angels and Fox Sports West as both a Spanish language and English language broadcaster.

Mota's career began in 1985, taken in the second round of the draft by the White Sox. Mota's career also began as the son of former big leaguer Manny Mota. His brother Andy Mota also played.

Jose Mota, with his brothers spent time with their father at Dodger Stadium. That's also where Jose Mota learned to switch hit, The Times wrote.

"I used to spend five straight innings hitting nonstop in that cage every day of the summer," Jose Mota told The Times in August 1990. "My dad would take a glance at me once in a while."

Mota spent that first year largely at short-season Niagara Falls, but he also got a quick look at AAA Buffalo. At Buffalo, Mota got five hits in 18 at bats.

He spent the next year in the Rangers system, traded there in the off-season. Between AA Tulsa and AAA Oklahoma City, Mota hit .295. He arrived in the Dodgers system, his father's old team, in 1987, staying there through 1988.

Mota finally arrived with the team that would bring him to the majors, the Padres, in 1989, after passing through the system of another team, the Athletics. Mota played at AAA Las Vegas in 1990, then got his call to San Diego in 1991.

Mota was hitting .309 at Las Vegas when he was called, The Times wrote.

"It's a special day for me," Mota told The Times of his call up, "but I don't want to get caught up in the rah-rah thing. I want to help this club, and I think I can."

But Mota got just 17 games with the Padres, getting eight hits in 36 at bats. His final game came June 14.

Mota didn't get another opportunity until 1996. In the meantime, he played in the Royals system at AAA. He played at Omaha for five consecutive seasons. He finally got called back to the majors in 1996. He got into two games, his final major league game coming June 2.

Mota, though, still believed he could get back.

"I still believe in myself," Mota told The Times in August 1996. "I'm still hoping I can get a break if a job opens in the big leagues. I'm trying to stay positive about it. Being in the minor leagues doesn't discourage me, but I don't want to be around just for the heck of it."

Going to spring training with the Expos in 1997 and getting another AAA offer, Mota finally retired, The Times wrote.

Mota soon found himself in another baseball career, announcing. By 2002, Mota joined the Angels as the Spanish radio announcer. More recently, he's served as the English language analyst. In 2014, Mota served as an Angels announcer for Fox Sports West.

In 2007, Mota worked on the All-Star Game telecast, interviewing players in the American League dugout.

"This is a great honor," Mota told MLB.com. "The All-Star Game has great meaning, especially being in San Francisco, where my dad started his career with the Giants."