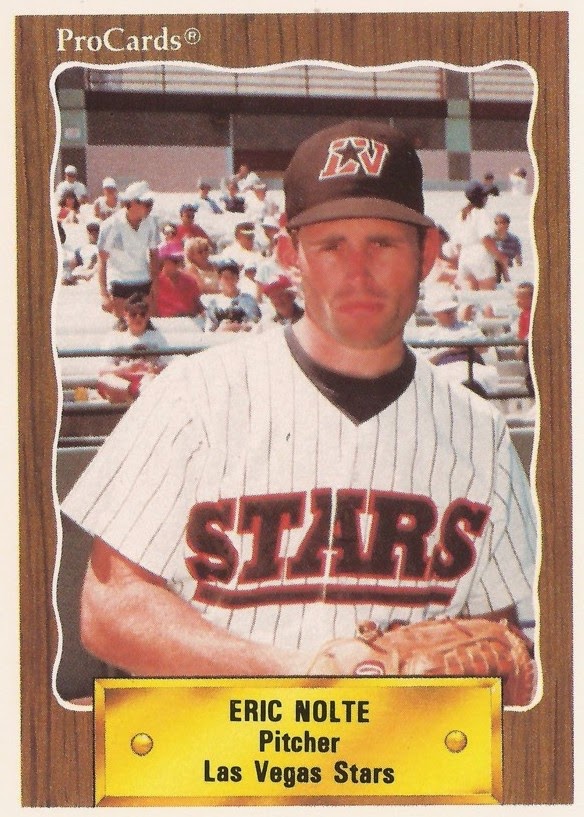 Eric Nolte knew what he needed to improve upon, he told The Philadelphia Inquirer after a late-August 1987 start.

Judging by that start, though, a complete-game, four-hitter in his sixth big league outing, Nolte was already well on his way.

"The big thing for me is to get control of myself and not let one bad game or one bad at-bat bother me," Nolte told The Inquirer after that big start, a 3-1 win. "And tonight, I was able to maintain that control. A complete game is a real thrill for me."

Nolte had come a long way to get to that start, a long way just that year. He began the season at single-A Reno, debuting in the bigs with the Padres Aug. 1.

After 12 starts for that Padres to close out the year, Nolte made his way back to the majors in parts of three more seasons.

Nolte's career began in 1985, taken by the Padres in the sixth round of the draft, out of UCLA.

In July 1986, Nolte was the beneficiary of some good run support with Charleston, going seven innings and picking up a 10-2 win.

"When they score runs like that, it makes it so much easier," Nolte told The Charleston News and Courier. "I was able to just lay back and challenge the hitters, and see what happens."

Just over a year later, Nolte was in the majors. After starting the year at Reno, Nolte moved to AA Wichita and then debuted with the Padres Aug. 1.

In 1989, Nolte came back from an emergency life-saving operation to repair a perforated ulcer. "That was the most pain I had in my life," Nolte told The Los Angeles Times days later. "I thought I was getting a burst of Alien. It was incredible. I couldn't even get in my pickup truck."

And he came back to the Padres, but for just three outings this time. He spent all of 1990 in the minors, getting back to the majors for one final season in 1991.

Late in spring training, it looked as if Nolte had a shot at the fifth spot in the Padres rotation, The Times wrote. Nolte just tried to make sure he pitched well.

"I'm going to go out there and keep it simple," Nolte told The Times. "It's not going to be like the past, where I'm thinking what will go wrong. I'll be thinking only of the positive.

Nolte made the rotation, getting six starts for the Padres. He went 3-2, but had an official ERA of over 11. By the end of May, he was released. Signing on with the Rangers, got into three more games, what turned out to be his final games in the majors.

Nolte, though, played three more seasons in the minors, going through three different organizations. He last played in 1994, for independent San Bernardino.