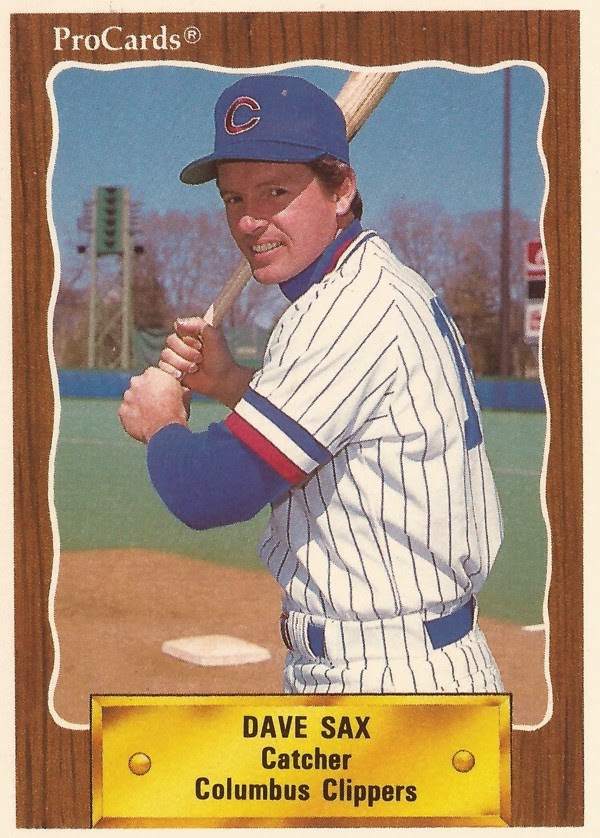 Dave Sax had played parts of four seasons in the majors, totaling all of 35 games. Now, in spring training 1987, Sax was just hoping for an opportunity to prove himself.

"If I make the team," Sax told the Lakeland Ledger that March, "then I just want a chance to open some eyes and impress someone, so when someone has to go, it doesn't have to be me this time."

Sax had an opportunity, a brief opportunity. He played in two games for the Red Sox that April, coming to the plate three times and getting no hits. They were the final two major league games of Sax's career.

Sax began his professional career with the Dodgers in 1978, signed as an amateur free agent. Sax made AA San Antonio in 1981 then AAA Albuquerque and Los Angeles in 1982.

The same year Sax made AAA, another Dodger named Sax was winning Rookie of the Year honors. Dave Sax, of course, is better known as the older brother of Steve Sax. Steve Sax had been taken by the Dodgers in the ninth round of the 1978 draft, the same year as Dave Sax was signed as a free agent.

While brother Steve Sax was excelling in the majors, Dave Sax struggled to gain a foothold. Dave Sax played with his brother in Los Angeles for two games in 1982 and seven more in 1983. In 10 total plate appearances, Dave Sax had one RBI, but no hits.

At the end of a 1984 season that saw no return to Dodger Stadium for Dave Sax, he was given his release. He soon signed on with the Red Sox.

His first year with Boston would be his best. He played in 22 games, getting his first major league hit June 8. He would go on to have a total of 11 hits in 36 at bats.

Despite changing organizations, the Sax brothers continued in constant contact, speaking by phone in 1986 four or five times a week, according to the Los Angeles Times.

"My brother was always a lot better than me," Steve Sax told The Times. "And I've never met a person who didn't like him.

"People say he and I were so different, but we're so much alike, deep down inside, that it's unbelievable."

According to that 1986 article, Dave Sax was also contemplating live without baseball. He had already gotten the dubious "a-Trophy" honor that year of being the player on the major league roster the longest from the start of the season without making it into a game, 34 games.

Dave Sax would get into four games later that year, then the two in April 1987 and that was it.
But, far from being out of baseball, Dave Sax lasted in the minors through 1992, spending 1988 at AAA Buffalo with the Pirates organization, then his final four seasons at AAA Columbus with the Yankees system.