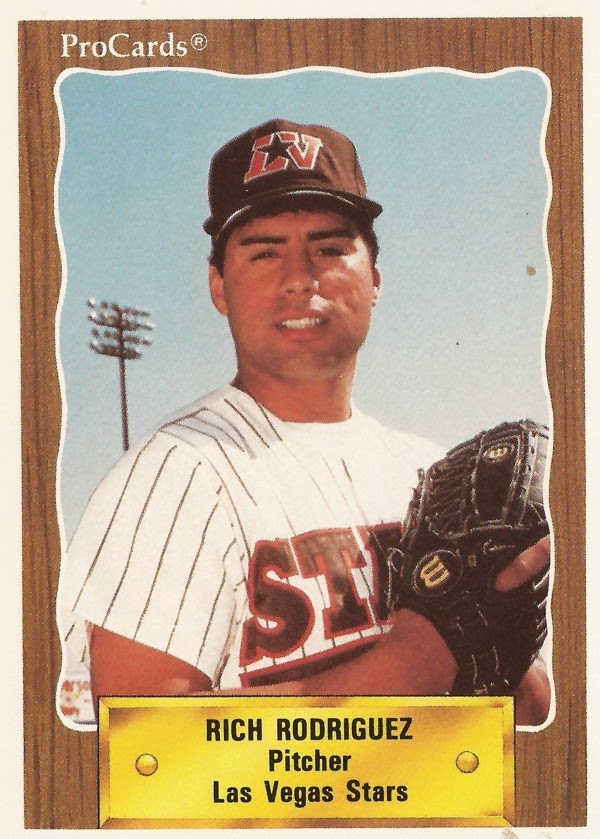 Rich Rodriguez felt he was being underutilized and he let his manager know.

In late June 1992, after facing just two batters before being pulled, Rodriguez simply told Padres manager Greg Riddoch he wanted the ball, according to The Los Angeles Times.

"When I'm sitting on the bench, I'm not just a happy-go-lucky guy. I want to pitch. I want the ball in tough situations," Rodriguez told The Times after that meeting. "Basically, I just wanted to reaffirm to him that my confidence level is all there."

Rodriguez was in his third season with time in the majors, on his way to getting the ball nearly as many times as the year before, more than 60. Rodriguez would go on to get the ball in parts of a total of 13 major league seasons, getting it for a final time in 2003 with the Angels.

Rodriguez' career began in 1984, taken by the Mets in the ninth round of the draft, out of the University of Tennessee.

He played that first year at short-season Little Falls. He made AA briefly in 1986, then for good in 1988. He returned to AA in 1989, but by then was with the Padres, sent there in a trade.

On Aug. 16, Rodriguez went two innings, giving up two hits and no earned runs. He also got his first major league win. The Padres came back after Benito Santiago got hit at the plate, The Times wrote.

"(It was) a little emotional roller coaster there for a while," Rodriguez told The Times afterward. "But the intensity was very good in the dugout. We had a lot of confidence. Even before Benny got hit."

Used almost exclusively as a reliever, Rodriguez did get two starts, one each in 1991 and 1992. In 1991, Rodriguez went five innings in May, giving up one run for a no decision. Riddoch called Rodriguez' start then "outstanding," according to The Times.

In June 1993, the Padres sent Rodriguez, along with Gary Sheffield to the Marlins for two minor leaguers and a rookie. The rookie was Trevor Hoffman.

Rodriguez stayed with the Marlins through the end of the season, signing with the Cardinals for 1994. He got into 56 games that year, and one in 1995. He spent 1996 completely in the minors, at AAA with the Royals.

Rodriguez returned to the majors in 1997, his first of three productive seasons with the Giants. Rodriguez got into at least 62 games each season, getting into 71 in his first.

After the 1997 season, where he posted an ERA of 3.17, Rodriguez re-signed with the Giants, telling The San Francisco Chronicle he had offers elsewhere, but didn't seriously consider them.

"We wanted to keep it as simple as we could," Rodriguez told The Chronicle. "The Giants made an offer, we made a counter offer and we were able to find some common ground. . . . . It took a little longer than I thought it would, but I'm glad we were able to get it done."

Rodriguez played through 2003, the left-hander pitching for the Mets, Indians, Rangers and Angels.

In 2003, Rodriguez was cut by the Angels out of spring training, The Times wrote. He thought about retiring, but went to AAA. He got called back to the majors in late-April, for three final outings, ending his big league career.