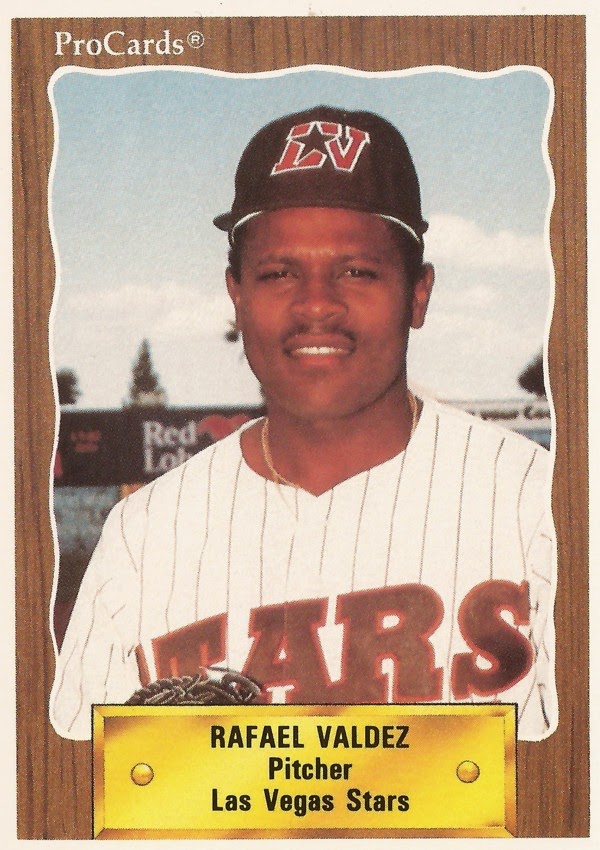 Rafael Valdez started his playing days as a shortstop, playing two unremarkable seasons at single-A in 1986 and 1987.

Then he was switched to pitcher. And he took off. Two seasons later, he was in San Diego.

"He makes me as proud as any young player who has ever come through the system," Tom Romenesko, Padre director of player development, told The Los Angeles Times as Valdez was poised to make the San Diego roster in April 1990. Romenesko added later, "he has exceeded our expectations."

Valdez made the big league club that month after a torrid two-year run through the Padres minor league system. The run would include a perfect game, pitched at single-A Riverside in 1989.

But his time in the majors wouldn't be as torrid. He ended up pitching in just three games for San Diego in 1990 before injuries cooled those expectations to the point that those three appearances would be his only appearances in the majors.

Valdez' career began in 1985, signed by the Padres out of his native Dominican Republic. He earned Padre most-improved minor leaguer honors after that year, playing shortstop for single-A Charleston in 1986. He hit .212 his first year and .264 his next. He also had a run-scoring error from short in an April 1986 game.

Switched to pitcher for 1988, Valdez saw immediate success. He went 11-4 with a 2.25 ERA for single-A Charleston. He started the next year at single-A Riverside, going 10-5 with an ERA of 2.26. He also had that perfect game against Reno in late July, earning himself a promotion to AA Wichita.

Valdez also earned himself a spot as one of the Padres' top prospects. The Padres even looked at bringing Valdez up for the 1989 stretch drive, but opted against it, The Times wrote.

"We just didn't think it was right to call up the kid and throw him right in the middle of this," Padres Manager Jack McKeon told The Times in mid-September.

Going into 1990, some were even looking at Valdez to be a force out of the bullpen for the Padres. Coming off the 1990 lockout, Valdez won one of the extra roster spots. He also benefited from a 1.80 ERA that spring, The Times wrote.

"It was a surprise to me," Valdez told The Times of the decision to keep him on.

Valdez' experience, however, wasn't a good one. In three appearances, he pitched 5.2 innings. He gave up seven runs, four of those on home runs. Two of those home runs came April 18 against the Reds. Two others came in one inning of work April 27 against Pittsburgh.

His other outing was good, an inning against the Cubs April 24. He gave up a hit and a walk, but no runs.

By month's end, as rosters were reduced, Valdez was sent to AAA Las Vegas. His troubles continued in early June, giving up eight runs and 12 hits in one outing against Albuquerque, The Times wrote.

By early September, his troubles were worse: tendinitis in his elbow. But he planned to pitch that winter in the Dominican Republic, according to The Times. He was ready by the next spring, but visa problems delayed his entry into spring camp. He would have similar problems in spring 1992.

In between his visa problems was another injury in July, to his rotator cuff. He underwent surgery and was expected to miss the rest of the season. He split 1992 between a rehab assignment at short-season Spokane and AAA Las Vegas. But his time as a prospect had passed.

He played five more games for Cleveland at AA Canton-Akron in 1993, ending his time in affiliated ball. He was credited with two seasons pitching with independent Albany-Colonie, according to The Schenectady Daily Gazette, then concluded his time with the team as a coach through 2001.