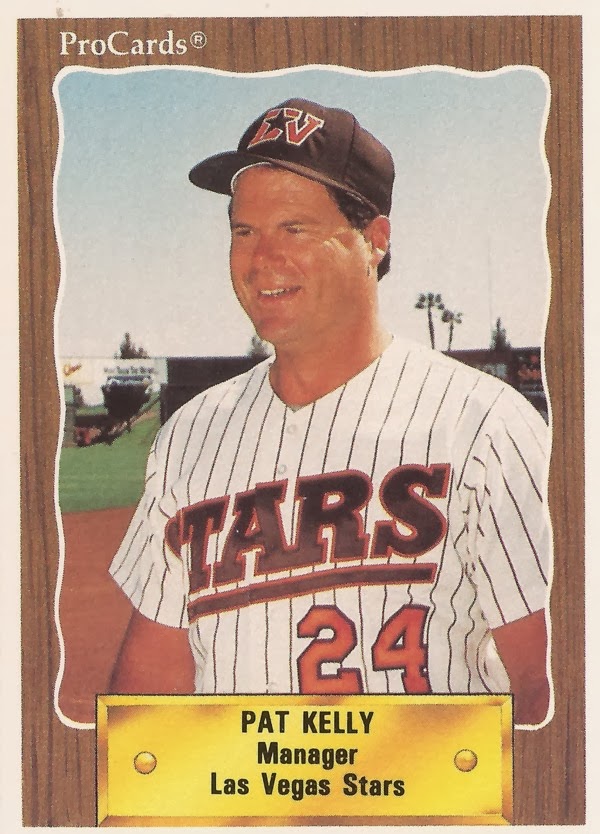 It was Pat Kelly's first managerial stint in the Carolina League in 2010, with Lynchburg. But he was still familiar with the league, and minor league baseball.

The player Kelly had spent a summer in the league back in 1979, with Kinston. The player and later manager Kelly in 2010 was also nearing four decades spent in the game's lower levels.

"That was what minor league baseball was 30 years ago," Kelly told North Carolina's Jacksonville Daily News in April 2010, recounting the changes in minor league parks over that time. "Now, with the improvements to the stadiums, I think our players don't realize how good they've got it."

Kelly's job, though, hasn't been necessarily to get them to realize how good those stadiums have become. His job over the his three decades as a minor league manager has been got get those players to realize their true potential, and see them off to the major leagues.

It was a potential that the player Kelly realized just once, in a late-May 1980 call up to the Blue Jays, a call up that saw him play in just three games. Years later, Kelly would see the majors again, for a brief stint as Reds bench coach in Cincinnati.

Kelly's career began back in 1973, taken by the Angels in the third round of the draft, out of Santa Maria High School in California.

Kelly started at rookie Idaho Falls, making AA El Paso in his fifth season. He moved to the Blue Jays system for 1978 in a trade, seeing AAA for the first time with an abbreviated season at Syracuse.

After that return to single-A at Kinston in 1979, the catcher returned to Syracuse to start 1980, then made Toronto by the end of May.

In three total outings with the Blue Jays, Kelly picked up two hits in seven at bats. Kelly then returned to Syracuse, then played just one more full season before starting his coaching career.

After player-coaching stints, Kelly got his first managerial job by 1986, at Charleston, S.C., serving as a coach at that year's South Atlantic League All-Star game.

The new manager saw his Rainbows come back from a close loss to win a July game by a 10-2 score, getting helped by a couple early double plays, according to The Charleston News and Courier.

"Those double plays early were really important," Kelly told The News and Courier after the game. "They helped the confidence of our infielders, especially after last night."

In 1996, in Kelly's second season managing Harrisburg, one of his players was a young Vladimir Guerrero.

"The thing that amazes you about Guerrero is that he can contribute in all facets of the game," Kelly told The New London Day after an August game where Guerrero did just that.

Over the next decade, Kelly moved to the Blue Jays, Braves and then Reds systems, spending time as a manager at AAA down to rookie ball, as a scout and, in 2007, spending time as a bench coach in Cincinnati. From 2011 to 2013, Kelly served as manager at rookie Billings. For 2014, Kelly is to manage high-A Bakersfield.

In 2012, Kelly saw another player off to the major leagues. This time, though, it was as a father. Kelly's son Casey Kelly made his debut with the Padres in August 2012.

"I don't know what my blood-pressure was …," the father told The Billings Gazette, "you just want him to do well."