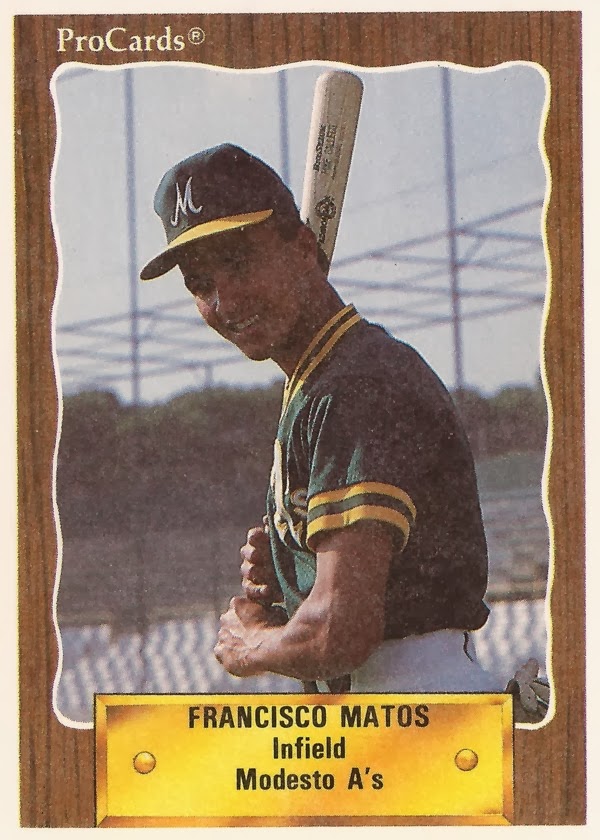 Allentown manager Joe Calfapietra looked at Francisco Matos' track record and concluded he could do well in the Northern League, according to The Allentown Morning Call.

"Here's a guy who hit .300 for all those years in Triple-A," Calfapietra told The Morning Call, "and I knew I had something special as soon as I signed him."

In all, Matos played at AAA in seven seasons in a career that spanned 16. He also made the majors, but his major league time was limited to a single stretch in 1994, 14 games.

Matos' career began in 1988, signed by the Athletics as a free agent out of his native Dominican Republic.

He first hit the field in 1989, with Modesto. He then split 1990 between Modesto and AA Huntsville. Matos then saw time at Huntsville each year through 1993.

Matos first made AAA in 1994 at Tacoma. Then, in July, he made Oakland. In 14 games, Matos picked up seven hits for a .250 average. His first hit was a ground-rule double. He got the ball back from a fan for the cost of a bat - a former teammate's bat.

Matos returned to AAA for 1995, signing with the Pirates. He then continued at AAA over the next four seasons, playing in the Expos, Orioles, Yankees, Devil Rays and Mariners systems. He never made it back to the bigs.

Then, in 2001, he signed with independent Allentown. He played a total of four seasons in independent ball, the last coming in 2004 with Brockton. In 2003, Matos helped Brockton to the league championship, Matos named series MVP.

"We knew if we jumped in front right away they were going to be in trouble," Matos told Our Sports Central. "We played just great baseball in the playoffs."

Matos has since gone on to a career as a coach. In 2006, he served as hitting coach at rookie Orem. In 2012, he served as coach at AA Arkansas. In August 2006, Matos saw his team's five-game winning streak broken, according to The Deseret News.