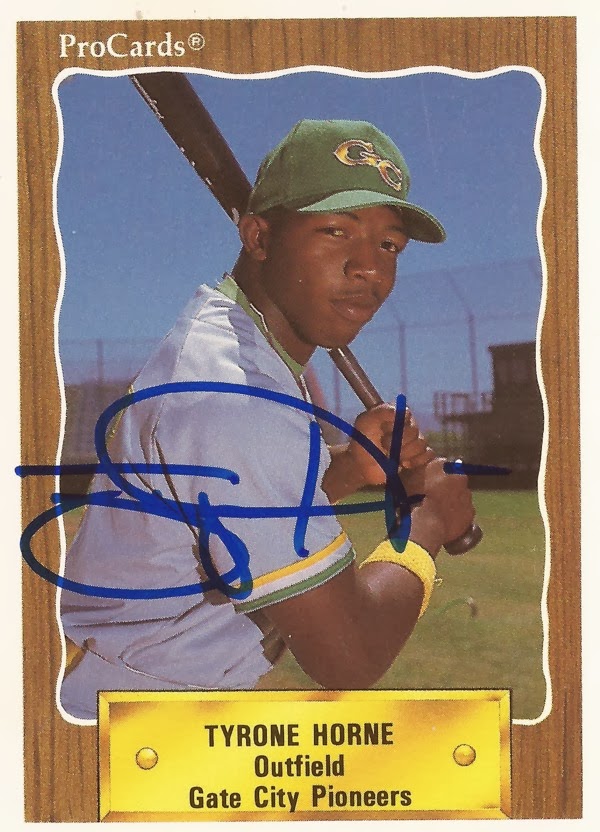 So, when he hit a home run in his first at bat this night in July 1998, Horne was surprised.

"When that ball went out of the ballpark," Horne told The Greatest 21 Days recently, "I'm like 'wow.' I'm pretty shocked."

Then he hit another one in his next at bat. His reaction then: "Oh, my God."

Two more were still to come.

In that pitcher's park, on that night, Horne hit four home runs.

He soon learned exactly what he'd done. Not only did he hit four home runs, but he hit for the so-called home run cycle. It was then - and still is - a unique accomplishment in the annals of professional baseball.
Horne spoke with The Greatest 21 Days recently by phone from his home in Idaho. Horne is now a youth baseball coach. He also has hopes of getting back into the pro ranks as a professional coach.

Horne talked about his career, from his youth in North Carolina, to turning pro out of high school to trying to make his way up the minor league ranks to the doorstep majors.

He told about how an assignment with the Expos and rookie resulted in Horne finding a new home state in Idaho, one where he remains in 2014.

He also told about that one night in San Antonio, the night where he wrote himself into the professional baseball record books as an Arkansas Traveler.

Horne played the first half of his professional career in the Expos system. He made single-A Sumter in his third season, after playing rookie ball his first two.

He made AA for the first time in 1992, a one-game stint at Harrisburg. He then returned to Harrisburg in each of the following three seasons. Horne called Harrisburg and the City Island ballpark one of his favorite places to play. "I loved playing for the Senators," Horne said.
He also singled out some of his early managers as helping him along, including Eddie Creech (Gate City), Lorenzo Bundy (Sumter) and Jim Tracy (Harrisburg 1993).

"I had a lot of coaches who played an important part of my life," Horne said.

Horne stayed with the Expos system into 1995, but he never got above AA Harrisburg. That was in spite of never hitting below .282 at AA.

Horne attributed his lack of advancement to there being too many good outfielders in front of him, or players the organization felt needed the opportunity. But that didn't phase Horne. He used it as an opportunity to learn.

"I continued to work my behind off," Horne said. "It made me work harder."

Horne moved to the Yankees system mid-1995. He then signed with the Athletics for 1996. Horne thought he might get his shot at Oakland.
He even got his first extended look at AAA, getting 67 games at AAA Edmonton. But his hitting wasn't there. He hit just .230.

"That season there was an eye-opener for me," Horne said. 'It brought me down to Earth. In some ways, I might have been over-confident and took it for granted."

It also brought him back down to A-ball. He signed with the Marlins in 1997 and the only spot they had for the 26-year-old was at single-A Kane County. Horne went back to single-A because he simply wanted to play ball.

Then, for 1998, Horne signed with the Cardinals. And he had probably his best year in pro ball.

Playing for AA Arkansas, Horne hit .312, with 37 home runs and 139 RBI. He also got a three-game look at AAA Memphis. He also got to play with his best friend from the Expos organization, Mike Hardge. That was probably the best part of the year, he recalled.
But the highlight of the season - of his career - came July 27, at San Antonio.

Horne wasn't even sure he was going to play that night until he got to the ballpark. Batting practice, he recalled, "was probably the worst batting practice I've ever had in my life."

Before going up to the plate the third time, two home runs already under his belt, Horne recalled telling his friend Hardge that he'd never hit three home runs in a game before. On the first pitch, he did it.

And he did it again his fourth at bat.

Horne had hit four home runs. It didn't take long for him to realize the true nature of what he had done. SportsCenter quickly picked up the feat: Horne had hit for the home run cycle. Each of his four home runs had come with a different number of men on base, from a solo shot to a grand slam.

The next day, he was interviewed by Jim Rome. "I knew I had done something special then," Horne said.

No one else in professional baseball has ever matched it.

"That's an honor that no one can ever take from me," Horne said.

Despite his accomplishment, Horne never saw St. Louis. He played three more seasons, including part of 2000 in Korea.

In 2007, he was inducted into the Texas League Hall of Fame.

Horne now lives in his adopted home state of Idaho, Horne serving as assistant coach for Bonneville High School in Idaho Falls. The Bonneville Bees team won the 2013 state championship. Horne also has hopes to get back into the pros as a coach.

"I love the game. I love coaching. I love sharing my experiences," Horne said. "I just want to be a part of the game."

Be sure and read Part 1, Tyrone Horne, Always Treasured